A tasty local sea snail that can be milked for anti-tumour compounds, anaesthetics and other biologically active chemicals is causing excitement among South Australian aquaculture researchers 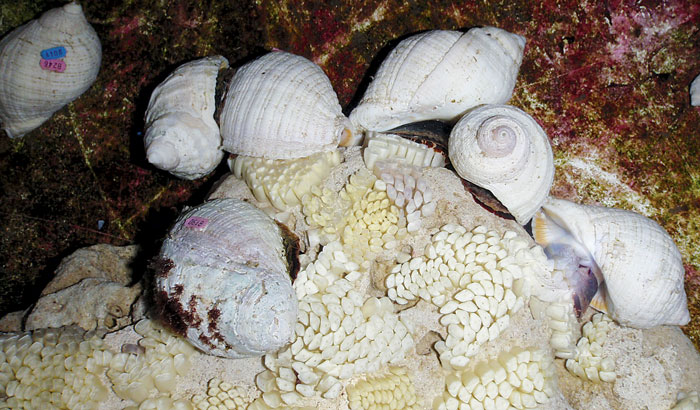 Aquaculture in Australia is diversifying. This is a trend the sector wants to encourage through the use of R&D to bring new species, products and markets into play for producers.

Stakeholder consultation undertaken to help develop the FRDC’s strategic investment plan for the next five years has highlighted the desire for a broader range of species in production.

To date, about 70 species are grown in commercial aquaculture systems in Australia. The sector earned more than $1 billion from a total production of 84,605 tonnes in 2011-12. This is an increase of more than 10 per cent from the previous year in both value and amount produced.

According to Australian Fisheries Statistics, the top five earners – salmonids, rocklobster, prawns, Southern Bluefin Tuna (Thunnus maccoyii) and abalone – are all produced for consumption as seafood. But new avenues of research are investigating a different range of products, with a focus on the production of newly identified biological compounds. 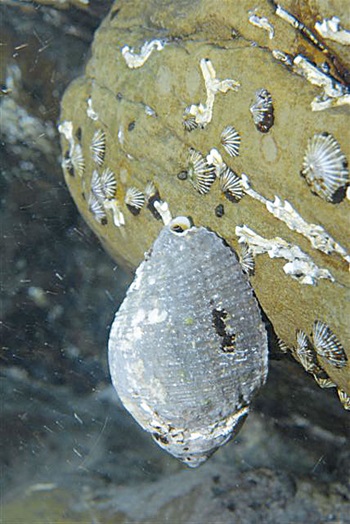 The sea snail Dicathais orbita growing in the wild.

In the process, she is also training a new generation of scientists to work in this promising and highly topical area of research. Among them is Warwick Noble, whose doctoral studies were undertaken with Kirsten Benkendorff at Flinders University in South Australia, before she moved to SCU.

Warwick Noble researched the aquaculture potential of a gastropod (or sea snail) native to Australia and New Zealand called Dicathais orbita. Although D. orbita’s range is limited to Australian and New Zealand waters, similar gastropods are fished and sold all over the world.

For Warwick Noble the allure of this species is that while the mature whelks have a worldwide seafood market, research in Australia has identified that D. orbita produces bioactive compounds with a range of desirable effects. This includes the compound Bromoisatin, which has anti-tumour properties.

“The most interesting compounds cannot be chemically synthesised for pharmaceutical development at this time, whereas consuming the whole organism may convey similar benefits to a purified compound … in the form of a tasty meal,” he says.

This discovery of bioactive agents not only lifts D. orbita into the more lucrative category of a functional food, but Warwick Noble’s research has also established that the compounds can be repeatedly “milked” from the juveniles as they grow into marketable size. 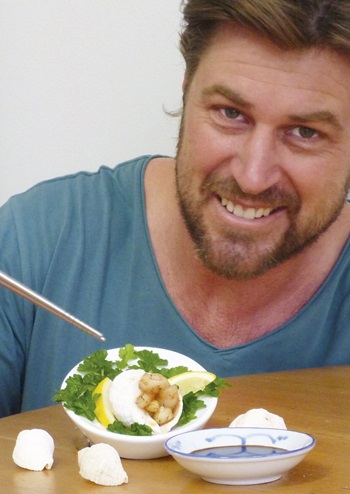 Warwick Noble has conducted research on sea snails (or whelks) with an eye to their commercialisation in Australian aquaculture farms specialising in molluscs. Along the way he has acquired a culinary appreciation for whelks, which he cooks for friends as part of “seafood feasts”.

Warwick Noble describes D. orbita as belonging to a “cosmopolitan” group of scavenging and predatory gastropod families found in every ocean of the world. Often referred to as whelks, the three most important families for fisheries and aquaculture are the Muricidae, Buccinidae and Melongenidae.

D. orbita is a member of the Muricidae family for which there are species that are highly valued in Asia, Central America and South America.

“Whelks are sold at seafood markets around the world and used in a variety of ways … from raw and pickled to uses in pasta sauces and salads,” he says.

“Like other molluscs, they are very versatile and the foot tastes a lot like abalone. When eaten whole it has a spicy flavour, which is prized in some Asian and Mediterranean cultures.”

Growing it in aquaculture involves production systems, costs and logistics not unlike those required by abalone.

Females spawn annually, depositing dozens of egg capsules on hard substrates, each containing thousands of eggs. These develop into larvae and hatch in about a month.

The larvae spend a few weeks feeding on phytoplankton before settling and undergoing metamorphosis into juveniles that resemble the adult and feed on carrion or prey on other benthic animals (that live on the ocean floor).

“The juveniles will also consume pellet feed and marketable products could be harvested after 12 to 18 months,” Warwick Noble says. 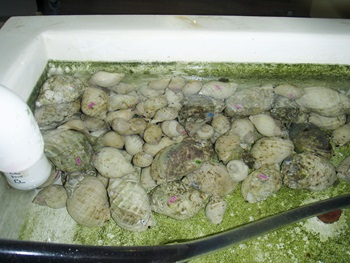 Broodstock of Dicathais orbita, a sea snail native to Australia and New Zealand under study for its potential to be aquacultured using production systems similar to those employed for abalone.

Kirsten Benkendorff and several of her students have played a pivotal role in characterising the bioactive compounds produced by D. orbita as they sought to understand the role of these agents
in the life of the organism.

“Some of the bioactive compounds are used by D. orbita to anaesthetise their prey and others seem to be produced for their antimicrobial properties,” Warwick Noble says. “They were first identified from chemical analysis that revealed similarities to molecular structures in other organisms with known bioactive properties. This triggered the research interest in these compounds.”

Obtaining samples of these compounds need not kill the organism; Warwick Noble established a way to repeatedly milk these compounds from D. orbita. As to the technique involved, he says it involves getting the gastropods drunk.

“The compounds are produced in what is most likely a stress response to the addition of ethanol to the water the animal is kept in,” he says. “The yield is quite low, but the technique is the first to milk more than one snail at a time. It does not seem to harm the animal, so can be repeated more than once.”

Market interest exists for these substances in the alternative therapies market and Warwick Noble is keen to see research continue in support of commercialising and marketing D. orbita.

“Aquaculture in Australia is rapidly diversifying beyond traditional species and seafood products,” he says. “Australian producers are exploring endemic species to satisfy domestic
and international markets."

“As for D. orbita, it could easily be marketed as a functional food. Since the nutraceutical and functional foods markets are estimated to be worth billions of dollars and expected to increase further in future years, there are strong indicators that D. orbita could enhance Australia’s aquaculture profile.”

Opportunities to commercialise D. orbita especially excite Warwick Noble given that aquaculture in SA is dominated by relatively few species. He says that within molluscan aquaculture, the focus is on abalone, oysters and mussels.

“Presumably aquaculture in SA has taken this form because the species farmed are relatively high value or techniques were developed for the culture of similar species.”

With two large gulfs sheltered from open oceans and a large expanse of open coastline, he believes that SA has tremendous diversity within its marine biota.

“There are many species in SA that have properties that could be explored and exploited for aquaculture,” he says.

“Current production systems are missing out on value adding or diversifying their production and products. Exploring further opportunities could have environmental benefits, increase employment, spread risks of losses due to pathogens or market fluctuations and increase profit for producers.”

He adds that with D. orbita he has seen the potential for domestic and international markets grow every year he has worked on this native sea snail.