By drawing on a unique blend of theoretical, practical and local knowledge, an Indigenous marine ranger training program is boosting research capability in northern Australia 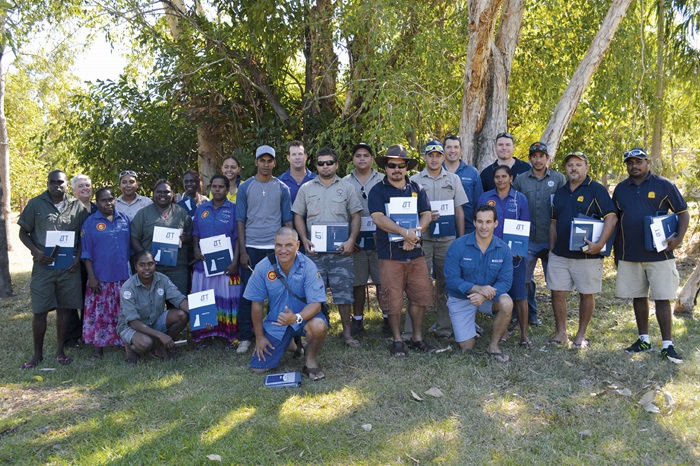 Class of 2014: instructors and students from the first Indigenous Marine Ranger Certificate II VET course in measuring and analysis held in Darwin.

Thor Saunders, principal scientist at the Northern Territory Department of Primary Industry and Fisheries (DPIF), explains the first need was to address knowledge gaps in the biology
of key coastal reef fish species.

“Stock assessments in NT have identified current harvest levels of Golden Snapper (Lutjanus johnii) and Black Jewfish (Protonibea diacanthus) are unsustainable in the Darwin region and fisheries managers require information on stock structure of these species to effectively respond to the situation.

“The second need was the aspiration of Indigenous communities, which wished to develop their own scientific research capability and be involved in sustainably co-managing their sea
country fisheries resources,” he says.

Indigenous community members, keen to be involved in monitoring and managing aquatic resources, were offered places in the newly developed Certificate II Vocational Education and Training (VET) course in Measuring and Analysis. Students were nominated for the course by community ranger coordinators based on their interest in resource management.

The course incorporated literacy and numeracy learning pathways with mentor support to expand the program to a wider range of participants.

Course participants were taught how to follow set procedures to collect samples, accurately record data in the field and use equipment such as scales, calipers and microscopes to conduct basic laboratory analysis and accurately record – by hand – observations and measurements, then enter this data into software.

The laboratory component of the course involved dissecting whole fish collected from other projects, as well as fish from the students’ sea country. This allowed them to learn how to take and record important measurements and extract samples for analysis.

The course was conducted in Darwin in June 2014 with 17 students from six Indigenous communities. They all passed with flying colours, Thor Saunders says.

The program will boost the regional research capability of the FRDC and government agencies across northern Australia between the Kimberley region of Western Australia and across NT to
Cape York in Queensland.

“We’re concerned about the sustainability of important reef fish species but it’s not economically feasible for government agencies to sample from such a wide area, and often in remote
regions,” Thor Saunders says.

“The obvious solution was to engage with Indigenous communities that lived in these regions to find the best way of conducting the work that offered maximum benefit to
both parties.”

Initial discussions indicated Indigenous communities wanted to be more active in managing their aquatic resources and, at the same time, provide development opportunities for
community members. 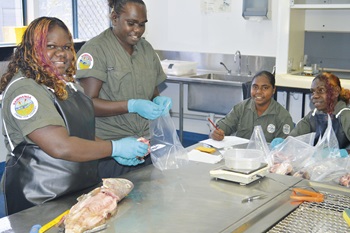 The new marine ranger program is designed to deliver a blend of theoretical and practical knowledge to participants who already have local knowledge.

However, they were not trained in the specific technical skills needed to collect fish samples and data with a minimum of supervision.

“The development of a vocational course with the outcome of technically trained rangers has meant more significant industry engagement and smarter business for the department. It also increases community awareness of susceptible species and the rangers have scientific backing to manage species more sustainably.

“We particularly want rangers to understand the link between data gathered in the field and what happens in the lab, and why the information is critical to fisheries management,” Simon Xuereb says.

Now that 17 participants have passed the course, the aim is to continue collecting the remaining samples for the stock structure component. Two days have been allocated for sampling at sites near each ranger’s community, which will be an important “performance indicator” for the results of the course.

In the past three years, NT DPIF has also supported the development of Indigenous fishing businesses, including small-scale businesses that catch and sell small quantities of fish to their local communities. A percentage of each catch is put aside for analysis.

“This way we can monitor trends and downturns in catch rates as well as the maturity of fish and population dynamics,” Simon Xuereb says.

“We want to know whether there is potential for further development of small-scale, inshore fisheries.”

Fish are captured either by line or net fishing. Datasheets are completed to record location and species and the fish are then separately bagged and stored on ice to preserve sample integrity. Length, sex, size at maturity and reproductive parameters are recorded for each species. Back in the laboratory, otoliths (ear-bones), DNA and parasite samples are collected.

Jade Murphy, a graduate of the Certificate II course, is a Larrakia ranger who describes the course as an “awesome” experience – especially meeting other Indigenous rangers from across NT and the opportunity to understand their different perspectives and how they work on their own country.

Part of her work has involved monitoring reef fish for NT DPIF, which she says has given her more opportunities to work with other government departments.

Carl Joswig, the ranger facilitator at Larrakia, says there are concerns that some of the coastal reef fish populations around major population centres may be under pressure from overfishing, particularly due to the dramatic increase in popularity of charter fishing.

“This is an issue in tropical Australia. It will become more important with increased mining and gas development projects, which will increase access opportunities, which will put pressure on
Indigenous sea country stocks.

“The present study on three important reef species will be used as a case study to determine the information that needs to be collected in future studies so we can make informed management decisions, ensuring reef fish are sustainably fished around current harvest areas, as well as in developing fisheries in Indigenous sea country,” he says.

Thor Saunders believes the Certificate II VET course has had immediate benefits and subsequent visits to communities with newly trained graduates have found that the graduates have become more active in collecting data for resource management.

He says this has included samples for the population-structure project, as well as collecting biological data from fish caught in emerging Indigenous fisheries and providing fish samples
for heavy-metal analysis.

The excellent quality of the data collected by the trainees means that they can now conduct this work on a ‘fee for service’ basis, he says, which provides the benefits of employment opportunities for new ranger positions from the money generated.

“The qualification each of the trainees received also supplies the additional benefit of them being more competitive if they decide to apply for jobs outside of their community in the area of resource management. To train Indigenous rangers to collect samples is good but we want to achieve more,” Thor Saunders says.

“The qualification is a pathway to employment, and an increased role in the management of aquatic resources and it looks like happening within the span of the project, which finishes
in 2016.”

It is envisaged that future courses will involve students outside ranger groups and in other communities outside NT.