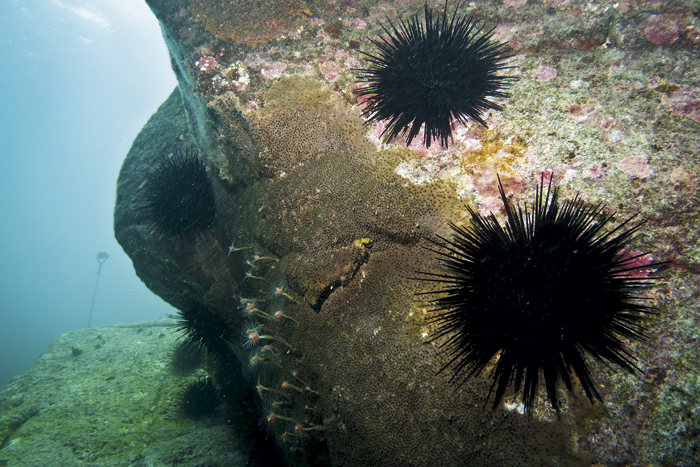 By Emma Flukes and Sean Tracey

Since the establishment of the long-spined sea urchin, Centrostephanus rodgersii, in Tasmanian waters in the late 1970s, the sea urchin has spread down the east coast.

In several areas along Tasmania’s north-east coast they have created extensive ‘barrens’ – where shallow rocky reefs are stripped bare of seaweeds. Areas of incipient barrens (small patches of bare substrate) can now be found as far south as Tasman Island in the south-east.

Continued formation of urchin barrens on Tasmania’s east coast poses the single largest ecological threat to the integrity of Tasmanian rocky reefs and their associated abalone and rocklobster fisheries.

The Institute for Marine and Antarctic Studies coordinated a recent workshop in Hobart to showcase research on, and discuss strategies to control the effects of overgrazing by, sea urchins on Tasmania’s east coast.

Research presentations centred around four main areas being considered for controlling the spread and impact of sea urchins in Tasmania: dedicated culling of sea urchins by commercial divers; culling of urchins by abalone divers as they fish for abalone; establishing a viable fishery for urchins; and enhancing population stocks of large Southern Rocklobsters (Jasus edwardsii), which are capable of predating emergent sea urchins on rocky reefs.

Scenario 1 explored the feasibility of divers conducting targeted culls of sea urchins. A small-scale culling program is already in place in Victoria’s Eastern Abalone Zone and has yielded promising results, with a significant recovery of kelp beds observed in areas subject to ongoing culling efforts (to about 15 metres depth).

A recent pilot study in Tasmania investigated the feasibility of a similar industry-implemented, spatially discrete culling program. In contrast to the Victorian cull methodology, the project in Tasmania used a systematic method that could measure the reduction in urchin density.

The results were that culling was very effective at reducing the density of urchins (91 per cent) when sites were re-surveyed 12 months after culling.

The research concluded that dedicated culling provides a highly effective method of protecting small areas of reef of high economic or commercial value, but that large-scale dedicated culling was not currently a feasible control option in Tasmania.

It was also noted that culling by divers will be effective to about 15 metres, but dive time limits activity in deeper water. 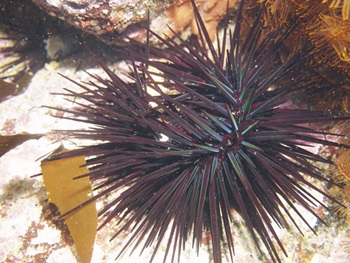 Scenario 2 examined the effectiveness of abalone divers opportunistically culling sea urchins as they harvest abalone. Cull rates and spatial coverage achieved by divers were quantified with the use of cameras and GPS loggers

Unsurprisingly, urchin cull rates declined as abalone catch increased and divers became increasingly preoccupied with fishing. As divers moved through an area, their collective efforts removed seven to 10 per cent of the total urchin biomass.

Although this has no detectable impact on urchin grazing at the ‘reef’ scale, at a smaller ‘patch’ scale (one to 10 metres) this level of culling is effective in protecting small, targeted areas of reef.

Scenario 3 explored the expansion and future development of an existing small-scale sea urchin fishery currently operating out of north-east Tasmania. Spatial targeting of this fishery to particular ‘at risk’ areas of reef may be an effective way to reduce the likelihood of further barrens forming.

This option is still in the early stages of exploration, but provides an exciting opportunity for economic and industry benefit while potentially helping to preserve the value of Tasmanian east-coast reefs.

A substantial increase in harvest would be needed to reduce urchin density to the level required to prevent destructive overgrazing. As with culling, this method would not protect reefs deeper than about 15 metres, due to diver limitations at greater depths.

Further research is required to determine the direct impacts of the fishery on urchin populations, but future development of the fishery may prove to be an effective option in shallow water, particularly if used in combination with other proposed control measures.

This management scenario has been identified by large-scale field experiments and two independent ecosystem models as likely to be effective in limiting the risk of future barren formation.

A recently implemented cap on rocklobster fishing on Tasmania’s east coast is predicted to reduce the risk of new barren formation from 50 to 20 per cent.

However, both the field experiments and ecosystem models indicate that rehabilitation of existing extensive barrens by building the biomass of large rocklobsters is, at best, a long-term prospect, and even then is unlikely.

The workshop demonstrated, through a range of empirical, observational and modelling approaches, that preventing urchin barrens from forming in intact kelp beds was an achievable management challenge.

The recent introduction of an east-coast rocklobster catch cap will assist in meeting that challenge. But recovering kelp beds once widespread barrens have formed was would be a far more difficult and long-term task.

In Tasmania the ecological threat the urchins represent has been identified at a relatively early stage in the progression from intact kelp beds to widespread barren grounds. As a result, management has been able to be ‘proactive’ rather than ‘reactive’, which will greatly enhance the chances of success in restricting further loss of kelp beds on Tasmania’s east coast.

It is encouraging that the target biomass of rocklobsters to both minimise the risk of ongoing barren formation to an acceptable level and to achieve optimum economic yield in the fishery are essentially the same.

The problem of managing sea urchin grazing in eastern Tasmania is both complex and multifaceted. The participation and cooperation of all stakeholder groups is required to protect east-coast reefs from sea urchin grazing, and to protect the marine productivity and the social and economic benefits derived from the reefs.