Trust and integrity: The secret ingredients of successful fish farming

Highly scrutinised and highly responsive to industry criticism, aquaculture has the opportunity to set the benchmark in sustainable food production

In terms of global food production, aquaculture has come late to a table that is dominated by land-based competitors. But by establishing its sustainability credentials, José Villalón believes farmed fish can leapfrog the performance of other primary production sectors. 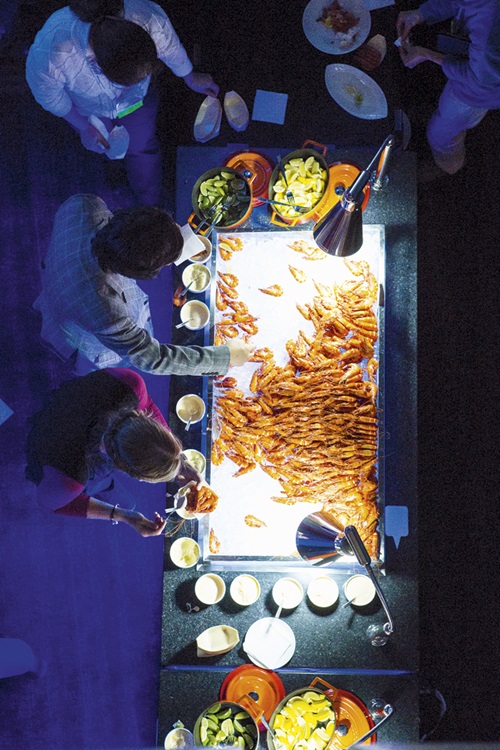 Seafood starred at the President’s Reception of the final evening of the World Aquaculture Conference. The reception was held at the Adelaide Oval.
Photos: FRDC

As director of corporate sustainability for the global fish and stock feed company Nutreco, José Villalón was the opening plenary speaker at the World Aquaculture Conference in June.

The five-day event was held at the Adelaide Convention Centre and drew more than 2000 delegates from around the world for technical workshops, research presentations and networking opportunities.

José Villalón said that with a projected global population of 9.3 billion by 2050, food production would need to double. The challenge is to do this while managing the environmental footprint of food production.

Fresh water is already a critically constrained resource worldwide and 70 per cent of all fresh water is used for agriculture, he said. Opportunities to expand land-based agriculture were also limited because of competition from other uses, including urbanisation.

However, there are vast amounts of open ocean waters that aquaculture could use to overcome critical land and water shortages to increase food production – if done responsibly.

In terms of production efficiencies, aquaculture is a natural leader, he said.

“Fish convert a greater proportion of the food they eat into body mass than livestock. Therefore the environmental demands, per unit of biomass or protein produced are lower.  On average, to produce one kilogram of finfish protein requires seven kilograms of grain compared with beef protein, which requires 61.1 kilograms of grain and 38 kilograms for pork protein.”

In terms of environmental and social impact, the industry has already been subject to intense scrutiny during the past two decades, he said – more than any other land-based food production system.

This scrutiny included the eight-year international negotiations of the World Wildlife Fund’s Aquaculture Dialogues, which have resulted in the Aquaculture Stewardship Council standards to assess and certify farming practices.

“Aquaculture is the only ‘centre-plate’ protein-production system with a referenced gold standard for addressing environmental and social impacts,” José Villalón said. 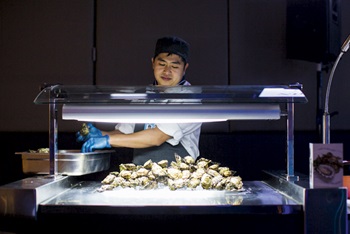 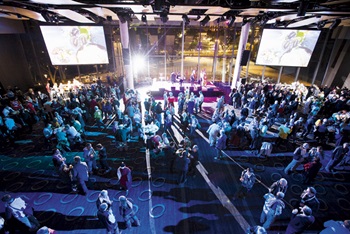 But collaborative action, such as the recently established Global Salmon Initiative, was needed to address outstanding environmental and sustainability issues.

The CEOs of companies producing 70 per cent of the world’s farmed salmon were working together in a pre-competitive agreement to resolve a number of issues for the industry, with the aim of achieving Aquaculture Stewardship Council certification by 2020.

It was a model of corporate collaboration – putting sustainability before competition – that other aquaculture sectors are also beginning to consider.

José Villalón said that while the industry still had issues to resolve, it was well placed to leapfrog ahead of other food sectors, and to act as an example to other sectors in responsibly producing food on a finite planet. But engagement, open collaboration and communication would all be crucial to maintaining the industry’s social licence to operate.

This point was echoed and expanded on by Charlie Arnot, CEO of the Centre for Food Integrity. “The potential and the need for productive aquaculture, on a global scale, is so great that we dare not risk allowing it to fail because we didn’t engage in the right way,” he said.

Over the past three decades, capture-fishing production increased from 63 to 93 tonnes. During that same period there was a phenomenal growth in aquaculture from five million tonnes to 63 million tonnes.

“In 15 years aquaculture is expected to surpass total production from wild-capture fisheries – if you can build and maintain your social licence,” he said.

“That is going to be the critical limiting factor. It is not likely to be science or technology or economics.”

The Center for Food Integrity defines social licence as the privilege of operating with minimal formalised restrictions based on maintaining public trust.

“If the public trusts you to do what’s right, they don’t feel the need to impose more formal restrictions – legislation and regulations,” Charlie Arnot said.

Those formal restrictions were coming not only from governments, but also increasingly from global food companies under increasing pressure to demonstrate their responsible sourcing practices.

Three key issues he identified as threats to the credibility of the aquaculture industry included the views of people who simply did not like fish farming and who felt there was something unnatural about aquaculture.

There are also concerns about the application of technology, such as genetically modified salmon, antibiotics or other animal health products, which could quickly lead to calls for greater controls over the industry.

Fraud was also identified as a pressing and immediate threat to the industry: “If the level of fraud within the seafood industry became more widely known publicly I think the global outcry for social control would be overwhelming,” he said. “It is an unacceptable risk.”

The global aquaculture community needed to demonstrate better systems of source verification and management, to reduce fraud and ensure food safety, and maintain its social licence, he said.

Operating with public trust – with a social licence – would allow businesses to maintain flexibility and respond quickly to market signals and new opportunities.

Operating without public trust – under a system of enforced social controls – would inevitably be bureaucratic and more expensive. There would be a focus on regulation, legislation, litigation and compliance – elements that would add cost and make it more difficult to capitalise on new opportunities.

“And once you tip over into a social control system, you never go back,” Charlie Arnot said.

“There is a fairly compelling economic case for maintaining social licence, because at the end of the day, as a business, it is very difficult to justify additional investment if there is not some return. This is not altruism; it is enlightened self-interest.”

He said that, historically, agricultural industries have operated under the assumption that with the right facts, the right data and with science on their side, they will ultimately prevail. But in today’s increasingly complex environment, this was no longer sufficient.

Charlie Arnot said that new research from the Centre for Food Integrity had identified that while the influence of others – family, friends and trusted experts – remained important in decision-making, confidence in shared values was 3.5 times more important to consumers than ethical and operational competence, which includes supportive science.

“So engage early, often and consistently, and make sure you use value-based communication,” he advised delegates.

It was advice that struck a chord with a case on the Tasmanian Atlantic Salmon (Salmo salar) industry presented during the session dedicated to social licence later in the conference.
Social scientist Emily Ogier, from the Institute for Marine and Antarctic Science, said a collaborative research project with CSIRO funded by the FRDC began by examining the science related to Tasmania’s coastal management.

However, it was soon expanded to incorporate a study of the role of science in the Atlantic Salmon industry’s social licence to operate.

The Atlantic Salmon industry is based adjacent to large urban centres in south-east Tasmania, and has grown rapidly since its beginnings in the 1980s – not without a suite of hotly contested environmental sustainability issues.

Emily Ogier said that while participants in negotiations assumed that science could be brought in to resolve various issues, the reality was far more complex.

She said that in the case of the Tasmanian industry, when there was conflict over whether an aquaculture operation was sustainable or not, the debate was characterised by divergent and contested interpretations of scientific data, so much so, that the credibility or the social licence of the science itself was called into question. 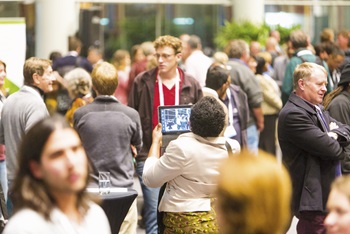 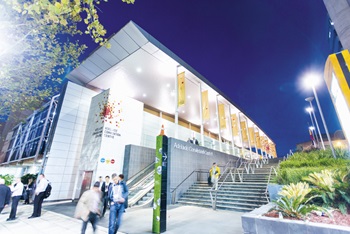 Running over five days, the international event was held at the Adelaide Convention Centre.

There emerged what she called ‘vicious cycles’ of adversarial conflict, particularly related to the release of commercially sensitive data, which resulted in accusations of industry secrecy, further entrenching reluctance from aquaculture operators to release information.

There have also emerged ‘virtuous cycles’ where there has been dialogue among stakeholders, resulting in the co-production of knowledge and a focus on the nuances of the biological data being produced, rather than on the secrecy.

Emily Ogier says the co-production of knowledge resulting from engagement between scientists and communities of interest proved essential in developing trust and overcoming an environment of conflict.

She said the case study highlights the need for social licence not just for business, but also for science itself. It is important that production of science takes into account the values of stakeholders and the questions and information they think are important.

While José Villalón looked to the oceans to expand aquaculture in his opening presentation, other sessions focused on land-based systems including integrated multi-trophic aquaculture, pond culture, aquaponics and recirculating aquaculture systems.

Thomas Losordo, a principal scientist at the global fluid dynamics company Pentair and an emeritus professor at North Carolina State University, held a series of workshops on recirculating systems, which are being adopted more widely for highly intensive fish farming.

He said the technology was not yet a ‘game changer’ for the sector, but it was starting to change the way aquaculture was being practised around the world.

“I believe that to meet this surging food demand, aquaculture will increasingly become more land-based than it is now and recirculation technology enables this to happen,” he said.

By treating waste within the system and re-using as much water as possible, recirculating systems can reduce the need for water inputs.

This significantly reduces water discharges when compared with ponds and flow-through systems. Recirculating water also reduces the energy needed to heat or cool the water, and allows fish to be grown outside their normal geographic range. 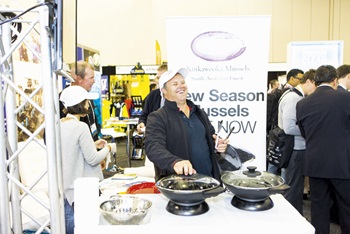 Thomas Losordo said the technology could assist ocean-based aquaculture enabling fingerlings to grow and develop in a safe environment for longer.

“The longer fingerlings are kept in a controlled environment the better, which means the technology enables them to reach ocean cages larger and stronger, ultimately producing a higher-quality seafood product,” he said.

The size of Australian commercial operations is small, compared with overseas – 200 to 250 tonnes a year, compared with 1000 tonnes, and up to 10,000 tonnes in Europe and China, where they grow species such as Atlantic Salmon and groper.

He said recirculation systems allow more production with a smaller environmental footprint; recent reports indicated an annual production of 1000 tonnes of fish could be produced from 0.6 hectares. Pond-based systems would need 100 to 200 hectares to produce 1000 tonnes a year, depending on the species.

While the Australian industry was clearly dwarfed by what was happening overseas, Rodney Missen said local producers are still achieving the highest levels of efficiency internationally, in terms of production per unit of water or area of land, and there is clearly the potential to increase local production.