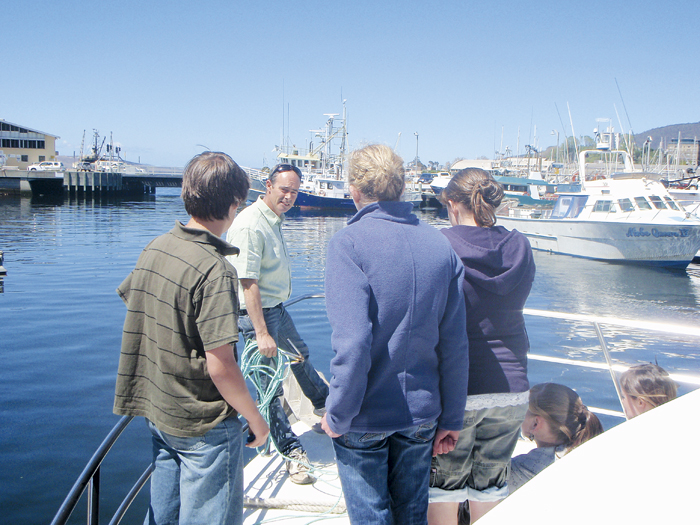 It is not every day that students find their classroom on the deck of a boat, sailing the River Derwent, or taste-testing fresh shellfish at a local oyster farm. But for 50 Hobart-based Year 9 students this will become their reality in October, as part of a three-day careers education program ‘Working on Water’.

The initiative emerged from conversations among friends over coffee about eight years ago to become a regular event on the calendar for a diverse range of marine-related businesses and institutions.

Sam Ibbott was working as a marine scientist at the Tasmanian Aquaculture and Fisheries Institute (TAFI) and was one of those keen to introduce more young people to the many careers on offer in the seafood and maritime industries.

The initial team included Emily Ogier, who was working at the Tasmanian Seafood Industry Council (TSIC), Kevin Redd, a PhD candidate at the University of Tasmania, and James Garde, the training manager at Seafood Training Tasmania.

“We wanted to bring together students from all schools who were genuinely interested in a marine career, not just speak to groups of students on a school excursion, many of whom weren’t interested at all,” Sam Ibbott says.

“So we ask students to actually apply for the program. Then we show them potential career pathways in marine research and management, Antarctic research, wild-catch fishing, aquaculture, naval architecture, marine policing, tourism … We identify transferrable skills – if you have a first-aid certificate or a boat licence, or learn to dive, then it opens up a range of options across different careers.”

The three-day program includes visits to CSIRO’s research facilities in Hobart, including the Antarctic division, and the Institute for Marine and Antarctic Studies (IMAS) at the University of Tasmania, along with a day on a tourist boat, which takes them to salmon and oyster farming operations. There is also a visit to fish processing facilities.

“We try to include some hands-on stuff and make it fun, so when they go to an oyster farm they get to shuck some oysters and try them raw,” Sam Ibbott says.

After running the program in Hobart for a few years it was expanded to Launceston, but failed to gain quite the same traction in the north, and there is now just the one program each year.

An FRDC-funded workshop four years ago helped those involved to evaluate why the program was successful, and how to make it sustainable so that it was not dependent on the enthusiasm of one or two people, or a huge financial impost on industry.

Sam Ibbott says the organising committee used to commit two full weeks each year to help organise and run the event. But now it effectively runs itself and he remains involved through the steering committee.

The TSIC manages the administration and finances and participating institutions and businesses have essentially internalised the program as part of their core operations – a scheduled event in their calendars.

A manual, Guide to ‘Working on Water: from Aquaculture to Zoology’ Careers Promotion Program, was produced as part of the 2010 program review, outlining the major lessons.

“For instance, we are very careful to ensure that we have good role models, ‘can-do’ people as presenters for the students,” Sam Ibbott says.

“Although we haven’t formally tracked the careers of participants, we know there have been some successful work placements and school-based apprenticeships. A couple of students have also gone on to study marine science.”

The program is tweaked each year in response to feedback from students and from the Department of Education, which has been a strong supporter.

In recent years, careers advisers from local schools have joined students on tours, to expand their understanding of marine-related career options. In 2014 there will also be a special presentation about marine and seafood industry careers at the state’s career advisers conference.

Sam Ibbott says that Hobart is ideally placed for such a program, with leading research and aquaculture businesses within a 30-minute drive from Hobart. However, the program has also provided a model for similar initiatives including the Seafood Industry Partnerships in Schools Program in Sydney.

The FRDC’s people development program manager, Jo-Anne Ruscoe, says funding for the workshop to review the Working on Water program is part of the FRDC’s larger commitment to strengthening links between education and careers opportunities.

A copy of the program manual is available from the FRDC website.

The FRDC is also a partner in the Primary Industries Education Foundation.