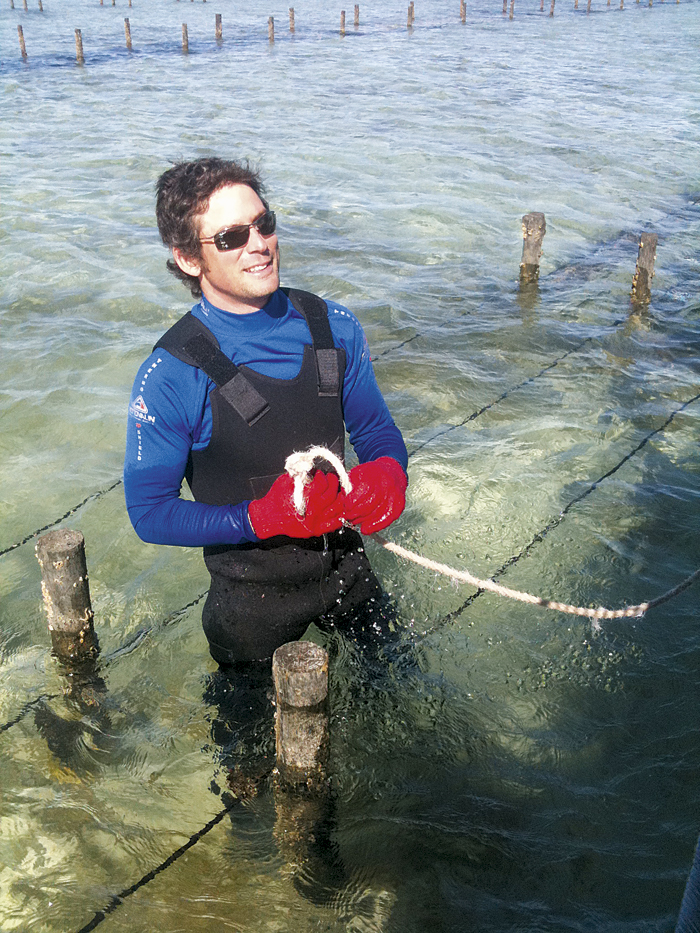 All in a day’s work: Jedd Routledge (above), managing partner of Natural Oysters, pulling in a boat at the Streaky Bay lease in South Australia.

Oyster farmers Ben Cameron and Jedd Routledge have more than one thing in common. They are managers of family-owned businesses with considerable history in the industry and both are participants in the 20th intake of the Australian Rural Leadership Program (ARLP).

The FRDC provided two $50,000 scholarships for the 59-day program to allow both to take part in the ARLP, which is held over 17 months and includes residential sessions in Australia and one component in India.

The aim of the ARLP is to foster personal growth and assist participants to develop the knowledge, skills and networks to be effective leaders in their communities and industries. It also aims to develop ‘contextual intelligence’ so leaders can understand the drivers that shape rural Australia and its primary industries.

“The whole course is a journey involving personal and group growth and it challenges your pre-existing ideas,” says Jedd Routledge, managing partner at Natural Oysters, based in Coffin Bay, South Australia.

“One of the great aspects was sharing other people’s journeys and hearing about different industries. I applied because a previous participant in the course recommended it to me and I’m already using what I have learnt. I try to be proactive both inside and outside business.

“For example, I’ve been involved in setting up a work inspirations program to attract and retain talented people, including youth. On the Seafood Jobs website we describe a variety of jobs, which we hope will inspire people to apply for aquaculture jobs.”

Ben Cameron is general manager at Cameron of Tasmania, and came into the family business after completing a Bachelor of Economics and a Bachelor of Arts in Public Policy and Political Science.

In 2013, Ben Cameron was the recipient of the Tasmanian and the Australian Young Achiever of the Year industry award. He says he was motivated to apply for the ARLP because his father had been accepted for the third course, which had a major positive impact on his father’s business and industry life.

Both Ben Cameron and Jedd Routledge have busy professional lives. Ben Cameron contributes to the management of several aquaculture industry bodies and for the past three years has been a director of the Tasmanian Oyster Research Council. He is also a member of the industry working group on Pacific Oyster Mortality Syndrome (POMS), where the goal is to support research into oyster viruses and biosecurity issues. 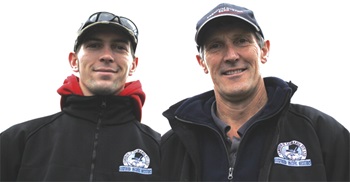 Jedd Routledge began his academic studies with a law degree and although he has never practiced law, says it has been useful for understanding the legal framework of business. More recently, he has completed a professional management program and is currently studying for a Masters in Business Administration.

Ben Cameron cites media training at the ABC as a particularly useful part of the course.

“I was in the media a lot after the Dunalley bushfires in January last year and the training that we did would have made a huge difference if I had done it beforehand – I will be able to present a much more professional face for the fishing industry in the future.”

The intensive negotiation training was another highlight, he says.

“It was about how to concentrate on the negotiation process itself and focusing on achieving the best possible outcome rather than concentrating on winning. It was also about not missing opportunities due to lack of negotiation.”

Both participants agree that the two-week Kimberley tour was an amazing start to the course: a physically and emotionally challenging experience with others who were at that time strangers but who are now part of their wide-ranging leadership network.

The course has recently become accredited and participants receive a Graduate Certificate in Rural Leadership from James Cook University, Queensland.

Applications for the next ARLP open in February 2015 and details are available here.