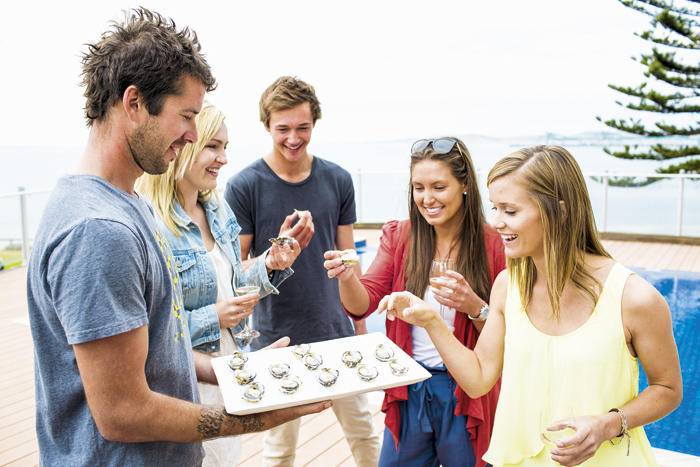 Images (and below right) from the pilot retail oyster promotional campaign.

A trial of promotional materials for oysters last year doubled oyster sales at the De Costi Seafoods store in Sydney’s Chatswood Chase shopping centre, according to Doug Aprim, who was store franchisee at the time.

His was one of six De Costi stores in New South Wales to take part in the promotional pilot, which will be repeated and expanded this year and run from August to December. 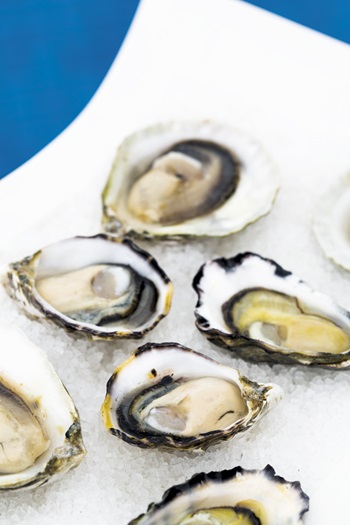 There will be 20 independent seafood retailers in Sydney, Melbourne, Brisbane and Adelaide taking part this year, including members of the Australian Seafood Cooperative Research Centre (Seafood CRC) Retailers Network.

The project is a collaboration involving Oysters Australia, the Seafood CRC and the University of the Sunshine Coast to further evaluate the impact of improved merchandising and point-of-sale merchandising on the sale of fresh oysters.

“Sampling attracted new customers who have now become regular customers. My staff learned new skills and we are now able to offer a fresher and better-tasting oyster to our customers.”

The first promotion was held during winter, when oyster sales normally slow, but Doug Aprim says as a result of the promotion the usual drop-off did not eventuate.

Oysters Australia identified the need for improved oyster marketing after reviewing the results of the Seafood CRC’s 2010-11 consumer research, which highlighted that oysters were being left behind other food choices.

During the past 15 years, food retailers such as butchers and bakers have transformed themselves from basic food providers with a limited range of products into specialty suppliers with value-added options and informative product labelling.

In the same period, fishmongers have added a selection of condiments, a marinara mix or fish patties, and fish fillet options that include skin on or off, fresh or frozen, Australian or imported. Occasionally there are some recipes available.

In the oyster category, the offering has hardly changed: one or two varieties, sold in half shells, by the half dozen or dozen, with little or no supplementary information for consumers at the point of sale about provenance or preparation.

During the initial trial, consumer responses were overwhelmingly positive, particularly for the demonstrations and sampling, and oyster display trays.

Two-thirds of consumers typically purchased oysters on impulse, and point-of-sale materials were confirmed as critical in encouraging the impulse buy, which did not appear to cannibalise existing seafood sales.

The main problem experienced in the trial was the difficulty of accessing sales data from stores. This is not a problem isolated to De Costi franchises but is experienced in much of seafood retail. The oyster industry, like many other industries that work with retailers to test point-of-sale materials, needs sales data to determine the effectiveness of the strategy.

On completion of the initial trial with six De Costi Seafoods retailers, the Seafood CRC agreed to work with Oysters Australia to expand the pilot promotion in 2014.

The cost-benefit analysis of the promotional program will determine whether it can be commercialised as part of services Oysters Australia offers to the industry. Promotional materials have been revised for the second trial and demonstrations will be run by the retailers involved, with support from the project group. Final results are expected in April 2015.