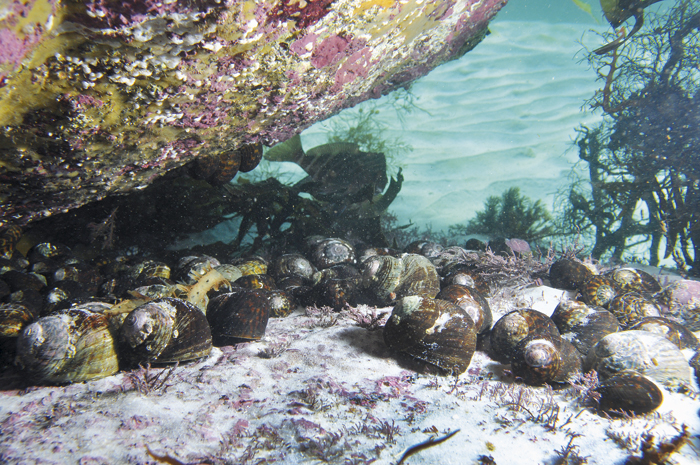 Periwinkles are found on exposed reef and boulder habitat in shallow temperate waters from NSW to Tasmania and southern WA.
Photo: John Keane

The Tasmanian periwinkle fishery is at a crossroads. Management changes since 2010 have allowed the industry to expand harvesting efforts. But to realise the economic potential of the fishery, divers need to develop a supplier-driven, integrated marketing campaign for periwinkles in order to increase awareness and promote the species as a high-quality, niche seafood product.

Edible periwinkles (Lunella undulata) have been harvested commercially in Tasmania and several other Australian states since the 1980s, but little is known about the species’ biology and population structure.

The 2005 management plan for the Tasmanian Commercial Dive Fishery provided a total allowable catch (TAC) of 35.2 tonnes for periwinkles, with a minimum size of 30 millimetres. In 2011, concerned that stocks were recovering slowly, fishers voluntarily agreed to raise the minimum size to 40 millimetres.

However, the precaution was applied with little scientific evidence to support it. This led to an FRDC-funded study to assess the periwinkle resource in Tasmania, evaluate market potential and suggest strategies for the sustainable development and management of the fishery.

A crucial part of this was identifying the size of periwinkles at sexual maturity in order to set size limits on harvesting that will allow populations to maintain their numbers.

Most of Tasmania’s periwinkle harvest comes from the south-east and north-east coasts, with catch rates higher in the south-east. The growth study sampled five locations in the main fishing regions on the east coast (Figure 1), capturing, tagging and releasing 3000 animals.

John Keane from the Institute for Marine and Antarctic Studies (IMAS) was a member of the research team and says the growth study shows periwinkles grow rapidly early in their life cycle.

Within the first three years, animals reach 35.8 to 46.2 millimetres – 80 per cent or more of their final size. They can live for up to 10 years, given favourable environmental conditions.

The study shows there is significant variability in growth depending on location. The average maximum length differed by as much as 32 per cent, ranging from 47 millimetres at Spiky Beach (central east coast) to 62 millimetres at Picaninny Point (north-east coast) and Recherche Bay (southernmost site).

Growth was also considerably slower at Spiky Beach, where it took more than six years for periwinkles to reach the legal minimum size. At other sites, periwinkles reached legal size in 2.8 to 3.7 years. Growth rates and maximum sizes were negatively related to water temperature, indicating that productivity may be influenced by climate variability.

Sex and maturity status of periwinkles is determined using examination of gonad development. Mature males have a creamy-white gonad, while mature females have a green gonad of variable shades.

“The increase from the previous minimum size limit of 40 millimetres set in 2011 to the current size limit of 45 millimetres means the vast majority of animals have the opportunity to complete at least one spawning, and for most two, before recruiting to the fishery,” John Keane says.

Periwinkle fishers were consulted when the minimum size limit was revised again and anticipated it would have negligible impact on their operations.

Harvesting of periwinkles has generally fluctuated greatly from season to season, and from month to month, a factor the study identified as limiting market potential.

Since 2006 commercial harvests have ranged from 13 to 35 tonnes a year, with an average of 22 tonnes a year. Some of the variation has been attributed to individual divers entering or leaving the industry, or simply switching to other species, such as abalone or urchins.

However, regional catch rates – kilograms per hour – have remained relatively stable since effort data was first recorded in 2007, which suggests current catch levels in the main fishing areas are sustainable.

The study also identified large sections of coastline where little or no catch is harvested, and the fishery has since been re-zoned to encourage harvesting in these areas. The statewide TAC has also been lifted, from 35.2 to 52.8 tonnes (Figure 1). 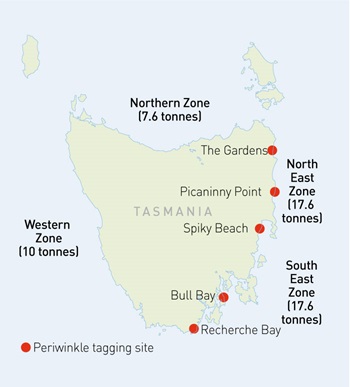 The supply of product to market is, at best, ‘irregular’, ranging from zero to 6.6 tonnes a month.

John Keane says feedback from markets indicates that inconsistent supply has made it difficult for some mainland retailers and restaurateurs to source periwinkles. This has subsequently led to a decline in consumer demand. In addition, occasional fishers will, from time to time, dump large catches on the market, resulting in a substantial price discount.

“Reliability of catch is critical,” he says. “Incidences of oversupply and undersupply damage the relationships that the regular periwinkle fishers are seeking to build with the markets.

Markets are increasingly realising this and seeking to build a sustainable and reliable supply with a core group of periwinkle fishers.

“Consistency in supply will be one of the key aspects of developing the periwinkle fishery.”

At the demand end, the market for periwinkles appears to have considerable potential for expansion, especially through the restaurant and retail sectors in Sydney and Melbourne.

Vietnamese communities prize periwinkles in their cooking and restaurateurs who have used periwinkles find them to be a versatile product, adding an element of the unusual as well as flair to menus.

However, a lack of product knowledge in the broader marketplace and the inconsistency of supply are hindering market growth. Those in the industry believe that a supply-driven, integrated marketing campaign is essential to increase product image and knowledge.

Periwinkle fisher Bryan Denny says that any expansion of the fishery will need to be market-driven.

“We have good relationships with many of the buyers and the key to that is supplying them consistently,” he says. “As things stand, if a new entrant to the industry wanted to target periwinkles, they would probably find it difficult as there needs to be this good relationship built up between fishers and buyers, and this relies mainly on consistency and quality."

“The peri fishers, including myself, have exhausted a lot of avenues, sending off samples and sometimes not getting a reply. But if the market starts requiring a lot of stock, there will be the potential for more fishers to get in,” Bryan Denny says. 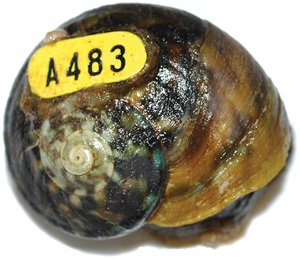