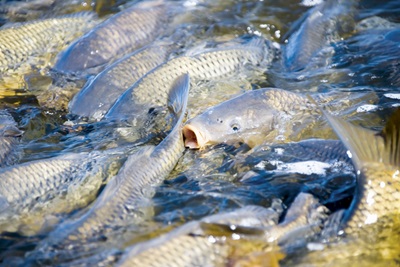 For the first time, scientists have successfully trialled a technology that could control and even exterminate invasive fish such as carp.

In a paper published in May 2014 in the journal Nature Biotechnology, CSIRO scientists reported the first proof-of-concept that ‘daughterless technology’ works in vertebrates.

Daughterless technology involves modifying the genes of fish so that when they reproduce, only the male offspring survive or are fertile. This modification is specific to a particular fish species and can be transferred only from parent to offspring, preventing spread to other species.

When the gene modification is inherited by female fish it either reduces female fertility or survival. This reduces the ratio of females to males in the population, eventually driving the pest to extinction as females become increasingly rare in the population.

Rabbits of the river

They are now the most abundant large freshwater fish in many parts of Australia, including most of the Murray–Darling Basin. A noxious species, Boolarra carp spreads rapidly and has been associated with significant damage to waterways, much like rabbits and cane toads on land.

Carp can tolerate a wide range of conditions and habitats and multiply very quickly. One female carp can produce more than 1.5 million eggs a year. It is no wonder they are often referred to as Australia’s ‘river rabbits’.

To date, carp control has mainly consisted of commercial harvesting or poisoning. While these options may reduce carp numbers, and poisoning may occasionally eradicate them from isolated areas, other options are being explored for more widespread control.

In one case of successful eradication of carp from Lake Crescent in Tasmania, a combination of several control methods was used including: barrier mesh and traps to reduce breeding and capture carp; ‘judas carp’ (which involves implanting a radio transmitter on an individual) to locate carp aggregations; use of a pheromone ‘lure’ odour to attract and trap mature carp; and some localised application of poisons, lime and rotenone to kill unhatched carp embryos. 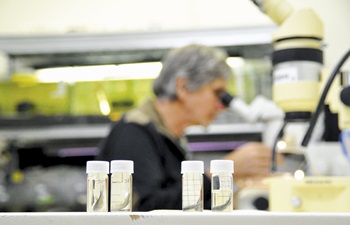 Zebrafish have been used to test the daughterless technology
Photo: CSIRO

With funding from the Murray–Darling Basin Authority (MDBA) and the Invasive Animals Cooperative Research Centre, research to trial ‘daughterless technology’ on fish began in 2000, about the same time entomologists in the UK began similar trials on insects in an attempt to improve the ‘sterile insect technology’ for pest insect control. The technology clearly works on insects, and field trials involving mosquitoes have now been carried out in several countries.

CSIRO honorary fellow Ron Thresher and his team identified and decoded the gene sequences that produce a sex-change effect in fish and then began laboratory studies to test if the altered gene assembly would actually produce male-only offspring.

“To establish if daughterless technology works on vertebrates, we undertook studies with Zebrafish (Girella zebra). We chose this fish species because it is small, has a short generation time and is closely related to several invasive carp species,” Ron Thresher says.

“We are also in the process of testing the technology on carp themselves; however, this takes much longer because carp have a much longer generation time.”

Trials on carp have been underway since 2009 at specialist facilities at Auburn University in Alabama, US. Several thousand juveniles carrying different versions of daughterless genes are being reared and tested, including versions that are suitable for field trial and release.

“We trialled three approaches using three species-specific gene assemblies: one that is lethal to females, but not males, before they reproduce (female lethal); one that converts female embryos into males (daughterless); and one that causes female but not male sterility (female sterile).”

He says of the three, the female lethal system is the most advanced, with Zebrafish carrying a prototype gene assembly having been bred through four generations. All fourth-generation fish were males.

Importantly, because the carriers have to compete with wild-type males for breeding, the CSIRO team was able to show that the male carriers are fully competitive for females and had the same levels of reproductive success as the wild-type males.

There are possibilities to enhance the success rates of the male carriers, which would improve the efficiency of a pest-control program.

So far, only one generation of female sterile fish have been bred. The gene assembly reduces female fecundity by approximatey 85 per cent and has had no apparent adverse effect on the fitness of male carriers.

“The sex-change gene assembly appears to be working in carp, with a large excess of males in the first generation of fish bred, but we need to wait until more fish are mature before we can be certain it is effective,” Ron Thresher says. 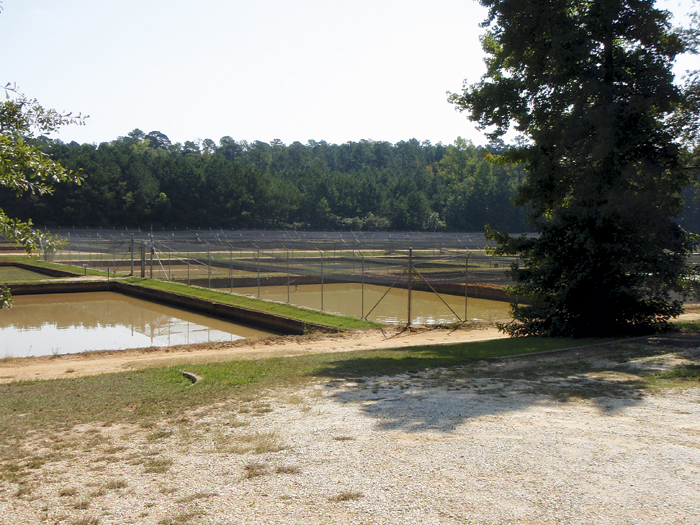 Fisheries facility at Auburn, Alabama, US, where Rex Dunham is raising carp for the trial.
Photo: Ron Thresher, CSIRO

The MDBA stopped funding the project in 2012, but the project was taken up by the Lower Murray Darling Catchment Management Authority, which supported the daughterless carp research for a further 12 months. The funding ensured that newly maturing carp were kept alive to breed and the next stage of the research on the second generation of carp could continue.

“Once this research with carp is complete our results will be evaluated by government regulatory bodies including the Australian Government Office of the Gene Technology Regulator and, as we have done throughout the course of this research, we will also continue to consult widely with industry and stakeholders,” Ron Thresher says.

Soon after the start of the project, community consultation, in the form of feedback from media reports, public presentations, discussions with state and Commonwealth managers and a formal survey, indicated that such a technology, if practical and species-specific, would be publicly acceptable.

“At that time, the public seemed comfortable with this gene technology for controlling carp, but they clearly want to be fully consulted before anyone contemplates releasing genetically modified fish into Australian waterways,” Ron Thresher says.

Daughterless technology alone can lead to pest eradication; however, CSIRO’s models indicate this technology is much more effective when combined with complementary control strategies such as use of localised poisoning, disruption of spawning activities or the introduction of a biological control agent, known as biocontrol.

A future where Australia’s rivers are free from carp and many of the native fish are potentially returned from the brink of extinction depends on further research, careful and controlled field trials, consultation with the Australian public and consideration by government regulatory bodies, specifically the Office of the Gene Technology Regulator.

Nonetheless, this research is an exciting advance for vertebrate pest management.

CSIRO acknowledges the funding agencies that have supported this research, which include the Murray–Darling Basin Authority, the Lower Murray Darling Catchment Management Authority, CSIRO, Auburn University and the Invasive Animals Cooperative Research Centre.