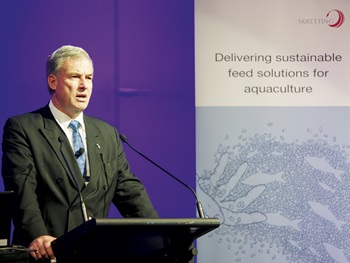 Senator Richard Colebeck launched the Australian Government’s new National Aquaculture Statement at the World Aquaculture Conference, as a precursor to the development of a national aquaculture strategy. He says the statement is a clear commitment from federal, state and territory governments to help the industry expand.

It recognises that there are several issues that need coordinating or streamlining at a national level to help the industry to progress. These include biosecurity, veterinary medicines, environmental approvals and market access.

Extensive stakeholder consultation will be undertaken in developing a national aquaculture strategy, with the industry committed to best practice in environmental and animal management.

Richard Colebeck said innovation is an important part of the aquaculture sector in Australia and the focus on quality and research and development is driving growth in the industry.

More than 40 species of fish and seafood are cultivated in Australia: the most prominent are Atlantic Salmon (Salmo salar), Southern Bluefin Tuna (Thunnus maccoyii), oysters, mussels and pearls. He said the aquaculture sector as a whole is predicted to overtake the wild-capture sector this year, in terms of value to the Australian economy.

The Tasmanian Atlantic Salmon industry was leading the way, with a value of more than $500,000, and a target of $1 billion by 2020. However, Richard Colebeck said other species offered the potential for similarly ambitious growth as Atlantic Salmon, particularly the emerging Yellowtail Kingfish (Seriola lalandi) sector.

The National Aquaculture Statement is available

The next World Aquaculture Society Conference will be held at Jeju Island, South Korea, from 26 to 30 May 2015. South Korean organisers expect more than 3000 delegates to attend the event, which is in a central location for areas of greatest industry expansion in Asia.

While annual Australian aquaculture production totals around 80,000 tonnes a year (FAO, 2012), South Korea produces 1.5 million tonnes, much of which is seaweed-based aquaculture (FAO, 2012). 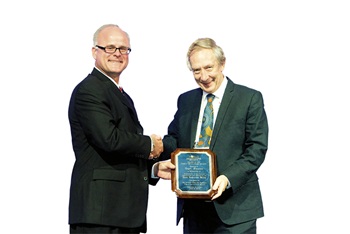 Australian scientist Nigel Preston, from CSIRO, was named as a Fellow of the World Aquaculture Society (WAS) at the annual conference, held in Adelaide in June. Nigel Preston is director of CSIRO’s Food Futures Flagship, which has a focus on breed engineering.

New WAS Fellows named at the conference were Wagner Valenti, from the University of São Paulo (Brazil), who pioneered the culture of freshwater prawns (or shrimp), and Tom Losordo, a world-leading aquaculture engineer and principal scientist with the global engineering firm Pentair, and an emeritus professor at North Carolina State University in the US. 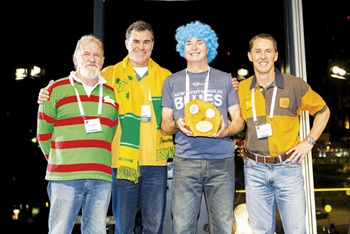 ‘Football colours’ was the dress-up theme at the President’s Reception where the Australian Aquaculture Blue Thumb award winners were announced.

The winners of annual Australian Aquaculture Awards, the Blue Thumb Awards, were also announced as part of the WAS conference, with presentations made at the final conference dinner.

Winner of the science and researcher award was the New South Wales Department of Primary Industries Port Stephens Fisheries Institute.

The best new product or technical innovation award was presented to BioGill, and the service provider award was won by Sue Carson of Aquasonic, Marine Solutions and Aquanel. The production award went to David Ellis.

A special recognition award was presented to Tim Walker and the producers of Austasia Aquaculture Magazine, for services to the industry.

The magazine, which had been in circulation for 27 years, ceased publication earlier this year.