From research to real world

The importance of interdisciplinary interactions was highlighted during the 51st annual Australian Marine Sciences Association (AMSA) conference, held in Canberra in July, with the theme of ‘Investigating our Marine Nation’. 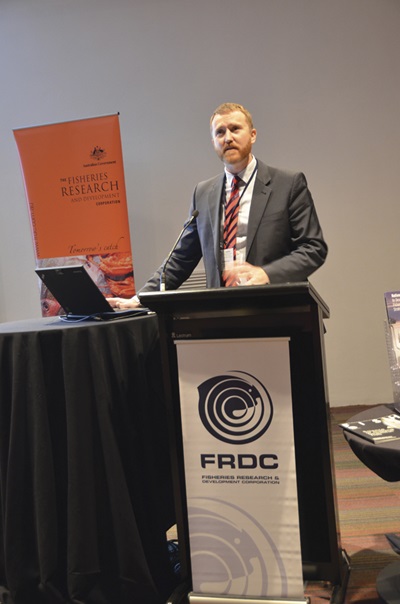 Over the four days of the conference, more than 260 presenters contributed to the 21 sessions. The plenary speaker was the director of meteorology and CEO of the Bureau of Meteorology (BoM), Rob Vertessey, who outlined the many synergies between meteorologists and marine scientists and described BoM’s marine services that could be of use to researchers.

Climate-related themes were also part of the conference’s dedicated fisheries session, sponsored by the FRDC.

Claire Spillman from the Centre for Australian Weather and Climate Research spoke about how the latest climate models could assist fishers and aquaculture operators better plan their businesses.

The fisheries session was well attended and featured talks that covered everything from more efficient data analysis methods to evaluating stocks. CSIRO’s senior fisheries modeller Malcolm Haddon opened the session with his presentation about the science of invertebrate stock status reporting.

“But to measure management success we need operational objectives that measure the performance of the fishery relative to defined reference points. If data was lacking, proxies may have to be used.”

Malcolm Haddon explained that the general approach both here and overseas was to reconcile the available science with necessary management decisions and from there develop a harvest strategy appropriate to the fishery.

Harvest strategies were an effective way to guide the fishing industry and fisheries managers through difficult decisions, Sean Sloane from the Department of Primary Industries and Regions, South Australia, reported.

Sean Sloane said the common language was important to help stakeholders establish a shared understanding of the purpose and application of a harvest strategy as a management tool.

Another way for fishers to be actively involved in the management of their fishery was to adopt a co-management model, as discussed by Rob Day, from the University of Melbourne.

His presentation emphasised the importance of setting up the right context where industry felt confident in the research approach presented.

But sometimes deciding whether the science at hand was trustworthy could be difficult – an issue outlined by Andrew Penney from the Australian Bureau of Agricultural and Resource Economics and Sciences (ABARES) in his presentation on science quality-assurance standards.

Peer review was recognised as the primary mechanism for reviewing science against these principles, he said. Openness, transparency and management of conflicts of interest were key elements for increasing trust in scientific information.

“A scientific quality-assurance standard for Australian fisheries science should be based on international experience and be relevant across all science institutions,” Andrew Penney said.

Matthew Flood, also from ABARES, presented the latest news on the development of the next edition of the Status of Key Australian Fish Stocks Reports.

First released in 2012, the next edition, to be released at the end of 2014, will include 18 more species. The second edition will, like the first, provide invaluable information about the status of each species, assessed through a standardised and consistent national fisheries reporting framework.

Rick Fletcher, from the Department of Fisheries, Western Australia, spoke about cost-effective, risk-based ecosystem management for fisheries and aquatic environments.

“If you have 400 species, you can’t regulate them all individually,” Rick Fletcher said. “Grouping them allows for easier and more efficient regulation of species with similar characteristics. The biggest challenge is therefore getting an appropriate governance framework developed, not how to collect more data.

“Even if you can collect lots of data and complete complex analyses, these will not be useful unless there is a governance framework that is capable of using this information in an effective manner.”

The manager of the Gillnet Hook and Trap Fishery for the Australian Fisheries Management Authority, David Power, also talked about novel approaches to management. He said AFMA was using sophisticated cameras installed on vessels to ensure accurate bycatch records were kept and to minimise the impact of fishing activities on marine mammals.

Craig Mundy from the University of Tasmania was also part of the fisheries session, reporting on fleet dynamics and site fidelity in Tasmania’s abalone fishing industry. 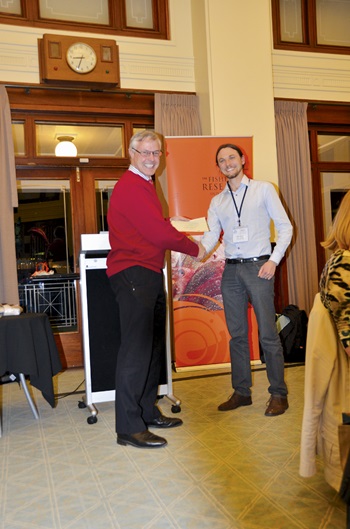 At the gala dinner on the final day of the Australian Marine Sciences Association conference, the FRDC’s executive director Patrick Hone presented the FRDC AMSA 2014 Student Award to John Ford, for his presentation ‘Empirical evidence for source-sink dynamics in a marine fish metapopulation’.

The presentation, based on John Ford’s PhD research, focused on the connectivity among fish populations.

“When fishing a species with many separate stocks, it’s important to understand to what degree those stocks are connected. How are the stocks reliant on one another? Does fishing one stock affect the other? From a fisheries management perspective, it is critical to effectively manage the more productive populations because any decline in these will also affect the less productive populations they are connected to,” John Ford explains.

He was able to successfully evaluate the dynamics between more-productive and less-productive fish populations by directly observing them, rather than through computer modelling studies. He conducted counts of the Southern Hulafish (Trachinops caudimaculatus), which is an important prey item for snapper and Southern Calamari (Sepioteuthis australis) in Port Phillip Bay, Victoria, over five years.

By tracking natural chemical markers in fish otoliths (ear bones) he was able to estimate the connectivity among different Southern Hulafish populations in the bay. He was able to identify two important source populations in Port Phillip Bay and provided a strong framework for applying his theory to other more commercially valuable fish species.

After finishing his PhD this year John Ford is now working at the University of Melbourne, leading an FRDC-funded project titled ‘Using local knowledge to understand linkages between ecosystem processes, seagrass change and fisheries productivity to improve ecosystem-based management’.

The project partners with commercial fishers in Corner Inlet, Victoria, and the West Gippsland Catchment Management Authority to harness the knowledge of fishers for improved catchment management and maintenance of healthy seagrass and sustained fisheries productivity.

He says he would like to continue to engage fishers in management stewardship and conservation through his current project, and to boost fisheries productivity through the restoration and rehabilitation of important habitat such as oyster reefs.

On 13 May 2014, the Australian Government announced a $15 million package assisting small exporters.

The rebate will be available to eligible small exporters in sectors where there is a specific export registration charge – that is, in the meat, dairy, egg, seafood, horticulture and grain export sectors.

Five specific industry consultative committees will work with the Department of Agriculture to roll out this initiative.

This will involve leading the discussions on the fees and charges review, and making recommendations to the Hon. Barnaby Joyce, MP, Minister for Agriculture, by 30 June 2015 about the equity and sustainability of the current fees and charges, including a proposal for a new structure, if appropriate.

The consultative committees will also recommend suitable projects to the Minister by 30 June 2015 to improve market access for small exporters.

Applications for the rebate and criteria for eligibility are available online.