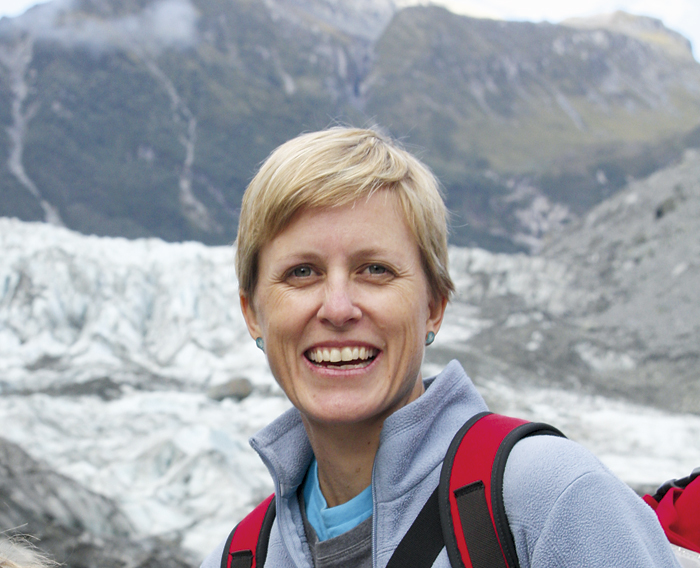 Initially an impassioned environmentalist, Renae Tobin has become a committed social scientiest during the course of her career, recognising that the health of a community direcly relates to the health of the environment in which it lives.

“The relationship between society and the environment is clearest in developing countries,” she says.

“Generally, when people are struggling the ecosystem also starts to struggle because people must exploit it to survive. Likewise, when people feel secure about their resources they are more likely to look after them.”

Now based in Townsville, at the James Cook University Centre for Sustainable Tropical Fisheries and Aquaculture and the School of Earth and Environmental Science, Renae Tobin’s interest in social science developed through her undergraduate years.

“I started in marine ecology, wanting to ‘save the environment’ – I was young and idealistic. Marine ecology was interesting but I didn’t feel like I was having any community impact. So I spent a few years doing a fisheries course with the Australian Maritime College and working with the CRC Reef Research Centre. I developed a real understanding and appreciation for fisheries research and quickly found that fishers know a lot more than researchers because they’ve been immersed in the marine environment for much longer.” 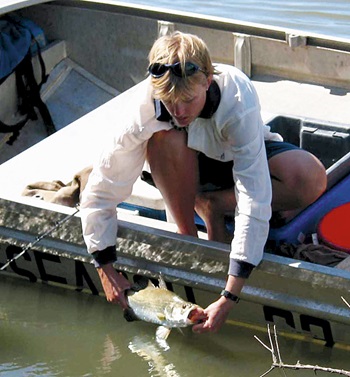 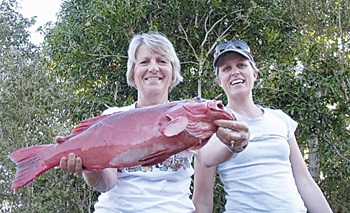 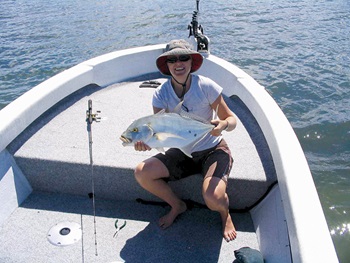 Working with fishers led Renae Tobin to undertake PhD research on the competition for fish that recreational fishers perceive exists with the commercial fishers in the Great Barrier Reef.

Her study revealed that when it comes to fishing, perception shaped reality.

“The public, the media, the industry and the government bodies supporting the industry are making decisions based on perception and psychology rather than hard data,” she says.

“It’s human nature – if you’re a recreational fisher, it’s easier to blame someone else for why you can’t catch a fish rather than the complexity of the tides, the weather, the location, the time of year or your own skill levels.”

She says her “pie in the sky hope” is to see the Australian community understand the value of supporting the fishing industry.

“I’d love to see the public and fishing industries stand together against the actual – and not perceived – threats to the Great Barrier Reef.”

She would like to see more information available to counter the widely held perception that commercial fishers only want to exploit marine environments.

“This misperception is usually based on outdated data or things happening overseas – or just whatever makes a controversial news headline. It’s frustrating because it means everything we recommend ends up in the political arena. Meanwhile, Australia has a very sustainable fishing industry that is much kinder to the environment than most forms of food production.”

The good news is that social science can, and does, make a difference to policy.

For example, in 2011-12 Renae Tobin worked on a regional co-management project that involved setting up local stakeholder committees in coastal regions. The newly formed Burdekin Sustainable Fisheries Alliance raised concerns about dugongs becoming entangled in fishing nets in their area.

In 2009, she was part of a multidisciplinary review funded by the Australian Department of Agriculture, Fisheries and Forestry to look at the ecological, social and economic aspects of fish spawning closures in the Coral Reef Fin Fish Fishery.

“There were nine-day closures in the months of October, November and December. Our social surveys revealed that these closures affected the way fishers normally operated. For example, in between closures, they were driven to go fishing even if weather conditions were bad.

They reported that they were happy to keep some closures, but the December closure was so close to Christmas and New Year they basically had to stop fishing for three to four weeks. This obviously had a big economic impact.”

Meanwhile, the ecological component of the project found the December closure was not actually providing much ecological benefit.

As a result of this and other information in the review, the December closure was removed and the number of days for the remaining closures in October and November were reduced.

“To me, this was an excellent example of how combining ecological and social and economic information can influence policy,” Renae Tobin says. “It shows how fisher surveys can make a real difference.”

Renae Tobin also brings her focus on commercial and recreational fishing to the landmark Social and Economic Long Term Monitoring Program (SELTMP) for the Great Barrier Reef. This project is designed to help reef managers make decisions that incorporate an ongoing understanding of social and economic conditions and effects.

The SELTMP surveys reveal a truth about commercial fishing that goes against the common perception.

“We asked commercial fishers what word comes to mind when they think of the Great Barrier Reef. Overwhelmingly the word was ‘beautiful’. For them, it’s not all about what they can harvest from these resources. It’s about seeing birds and dolphins, sunrise on the water, being linked to the natural environment. Commercial fishers feel a very strong desire to conserve these things.”

Renae Tobin is looking at the factors that make some commercial fishing businesses more secure or resilient than others in the face of change. The FRDC-funded ‘Adapt or Fail’ study was launched in July 2013.

She says commercial fishers in the region are under increasing pressure from a range of changes – in the environment, in the economics of their businesses, and in fisheries management.

“Meanwhile, government assistance is decreasing. So the only way fishers are going to survive is if they can adapt and organise themselves. We’re hoping this study can help fishers do better in the face of these changes.”

Scientists noticed that different business models adapted differently to recent changes such as re-zoning cyclones Yasi and Hamish and the Queensland floods.

“Everyone assumed bigger businesses would adapt better, because that’s generally the case in other industries,” Renae Tobin says.

“But we found the complete opposite – the bigger businesses tend to be more specialised, which means less flexibility. It was actually the more diversified businesses that adapted best. This is a fundamental challenge to the current industry philosophy.”

As part of the FRDC-funded ‘Adapt or Fail’ project, Renae Tobin is surveying commercial fishers who operate along the Queensland east coast.