Fuel for the future 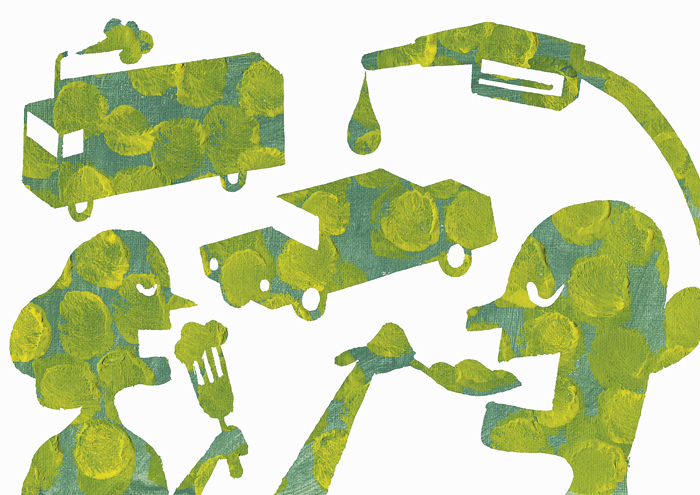 Julian Cribb, an adjunct professor at the University of Technology, Sydney, presented a discussion paper on the potential value of an Australian algal industry for Future Directions International, an independent, not-for-profit research institute based in Perth, Western Australia.

The aim of his paper was to stimulate debate about the potential role of algal biofuels and the role of aquaculture. Future Directions International conducts independent strategic analysis and research into issues Australia will face in the medium to long term.

Julian Cribb argues that, given the country’s reliance on road-based transportation for food distribution, wide-scale algae farming for biofuels offers a viable energy risk-management strategy. There are also potential applications for both micro and macro-algae species in nutrition, waste disposal and plastic production.

“Algae are not a ‘silver bullet’ – there is no such thing in the energy and food industries,” Julian Cribb says.

“However, they are a new, highly promising option for Australian farmers, resources companies, investors, governments and young people to consider as we plan a more prosperous, sustainable and secure future in an insecure and fast-changing world.

“Where algae have an advantage over existing industries is in their ability to provide enduring solutions to real threats to national security, both of food and fuel. They have particular suitability to the climate and geography of Australia, and to the technical skills and positive outlook of its people.”

Julian Cribb has calculated that an expanded algal industry could generate $50 billion in new revenue and create more than 50,000 new jobs, particularly in regional Australia. But to seize the opportunity, Australia must accelerate its national research and development effort into algae culture and biofuels, he argues.

“Petroleum is primarily a biological product, produced over millions of years by the breakdown of organic matter (chiefly from algae) and its reprocessing by geological heat and pressure,” he explains. “Oil is also produced renewably every day by living plants, using sunlight as their main energy source, in forms that can be used in all the ways we now use petroleum – and many more.”

Julian Cribb says the United Nations Food and Agriculture Organization’s research has found that “the most productive source of ‘fresh’ oil is green algae … these produce over 100 times more oil than do land plants (such as canola, sunflowers or soybeans) because they do not have to divert energy to producing roots, stems, flowers, seeds and leaves”.

There are 72,500 known algal species and the oil content of each plant as a proportion of dry weight for wild species can be as high as 77 per cent for Schizochytrium and 42 per cent for Dunaliella.

Australia is uniquely positioned for algal farming because of its land mass and sunshine, according to Julian Cribb.

“Algal fuel and food is ‘bottled sunshine’. The energy from the sun is converted by tiny plants using photosynthesis and stored as oil, proteins and carbohydrates ... thanks to our mid-latitude location and relatively cloudless skies, Australia receives more sunlight per square metre … than almost any country on Earth.”

Based on current literature on oil yields, he says it would be feasible to produce enough algae for Australia’s fuel needs from 6000 square kilometres of ponds, about 0.07 per cent of Australia’s land surface area. But the ‘ponds’ could take on versatile forms.

“Algae, being water plants, can also be grown at sea and in bays in floating tanks or plastic bags, so the actual area required for fuel self-sufficiency may be as low as 0.03 per cent of Australia’s sovereign land and ocean territory.

“Intensive algal production may take as little as a tenth of the land required for ponds, and can be carried out on individual farms, factories, mine sites, urban wasteland or industrial land, providing renewable local fuel right where industry most needs it. There is no reason for algae culture to compete for land area with food production or wilderness.”

Smarter water and nutrient use

Large amounts of water would be a prerequisite for algal farming, but this industry need not compete with current uses for water, particularly as algae grow in salty, marine or brackish water not fit for drinking, livestock or industry, Julian Cribb says.

“Algae farms can be located in bays and bights, in tidal inlets and in salt flats and salt lake beds, on abandoned farming or grazing lands, or contaminated industrial sites. Most algae farms recycle their water, so losses are mainly confined to evaporation. In intensive algae culture, most water used can be recycled.

“Algae farms can also make use of sewage effluent and other urban or industrial wastewaters, or groundwater released by mine dewatering or oil and gas production. The bioremediation of these sources is a significant opportunity to clean the water for reuse and offset the costs of fuel production as well as reducing costs to the polluting industry.”

Nourishment for algal crops could be from the $3 to $4 billion worth of food Australians throw away each year, and other organic wastes from factories and abattoirs, garden and park clippings, and most of the nutrients in its sewage system.

“All these nutrients can readily be recycled to nourish algae, which in turn will yield fuel, fertiliser and feed for animals and fish.”

As part of a national algal farming strategy, Australia could adopt similar organic waste-recycling systems to those operating in parts of Europe, with sewage biosolids and effluent also recycled.

“Algae farming, in other words, offers a cure for a major waste-disposal headache for Australia by reusing nutrients currently considered too contaminated to use in food production. This will reduce the flow of material into landfill, and eliminate ocean and river pollution by effluent. Algae thus provide the ‘missing link’ in Australia’s nutrient-management chain, encourage recycling and reduce national exposure to imported fertilisers (from global sources as risky as oil).”

Julian Cribb foresees a growing role for Australian cultured algae in both human and animal foods.

“An important aspect of a widely dispersed algal feed production is that yields are less likely to be adversely affected by climate extremes than broadacre grain production, especially the closed intensive algal systems. Algae therefore represent a far more climate-stable and reliable source of feed (and food) at a time of growing climatic instability, and hence a genuine national response to climate change adaptation,” he says.

“As grain production becomes less reliable due to a changing climate and more grain is required for human food, the potential to feed the world’s meat animals, poultry and fish on a diet based on algae will grow dramatically. Up to half the by-product of algae grown for oil consists of vegetable protein and carbohydrates highly suitable as animal and fish feeds. This in turn holds major benefits for Australia’s livestock and aquaculture sectors.”

Unlike traditional agricultural sectors, an expanded algae industry could also slot seamlessly into the urban environment, helping to create greener cities, he says.

“Algae (both micro and macro) can be integrated in many creative ways with the production of vegetables, fish, fruits, health foods and small livestock as part of the emerging urban agriculture, both to recycle wastes and to create new products.”