The Wahoo (Acanthocybium solandri) research is part of Mitchell Zischke’s PhD thesis; he has also created a model for the assessment of other bycatch species. More than 400 people attended the conference in July where he presented his findings.

The second award was won by Stacey Trevathan-Tackett for her poster on microscale sediment chemistry during seagrass decomposition. 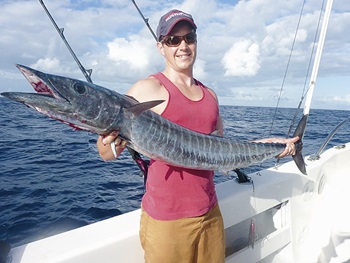 Although the Eastern Tuna and Billfish Fishery focuses on tuna and Swordfish (Xiphias gladius), 20 to 40 tonnes of Wahoo are also harvested each year.

This contributes to an annual global catch of about 3000 tonnes. He found that the lack of biological information about the species was limiting stock assessment and management.

The work he presented at the conference is part of a larger body of information he has collected to assess life history, stock structure and sustainability of Wahoo. Stock structure data has allowed him to determine that Wahoo off the east coast of Australia are a single population, which do not appear to mix with other populations from the eastern Pacific Ocean.

Apart from examining the commercial catch, Mitchell Zischke also conducted surveys of recreational fishers at boat ramps and in tackle stores to determine who was targeting Wahoo (and other pelagic species) and how many they were taking.

The final part of his PhD combined biological and fishery information to produce the first stock assessment of this species for the region (eastern Australia). He has found that the current levels of catch are below reference points, which means Wahoo is being fished at a sustainable level, given their fast growth and the low levels of catch.

His work provides a baseline for the management of commercial and recreational fisheries that catch Wahoo. It also provides important information to aid in future assessment of the species. 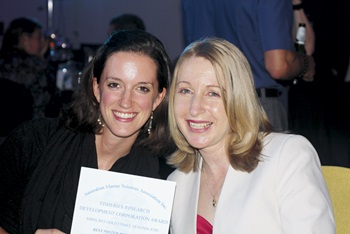 Stacey Trevathan-Tackett’s winning poster illustrated the work she is doing on the cycling of chemical compounds between seagrass and the environment during seagrass decomposition.

Seagrass meadows are a globally significant carbon sink. They cover only one per cent of the sea floor but capture about 70 per cent of marine carbon dioxide and at rates up to 40 times faster than terrestrial forests. This ‘blue carbon’ – atmospheric carbon captured and stored by marine environments – can remain stored for millennia.

Her research is centred around Gosford on the New South Wales central coast. She is looking at factors that can adversely impact seagrass meadows, and how the health of seagrass meadows affects their capacity to store carbon, including how carbon is released as the meadows decompose.

Found in coastal areas including salt marshes and mangroves, seagrass meadows are in decline around the world. About 30 per cent have been lost since records began in the late 1800s. Since the early 1990s, the rate of loss has accelerated and they are now declining at a rate of seven per cent per year.

Stacey Trevathan-Tackett says declining water quality due to sediment and nutrient inputs from land can cause algal outbreaks that block out light and cause the death of seagrass. Physical disturbances such as dredging and boat groundings can also kill seagrass.

With sea temperatures predicted to rise, she is investigating how high temperatures and high nutrient loads might affect seagrass decomposition, nutrient cycling and carbon stocks.

The role that coastal environments can play in a future low-carbon economy is a fast-growing area of research and Stacey Trevathan-Tackett’s work is adding to the knowledge about how chemical, microbial and environmental factors come together to impact seagrass carbon storage.