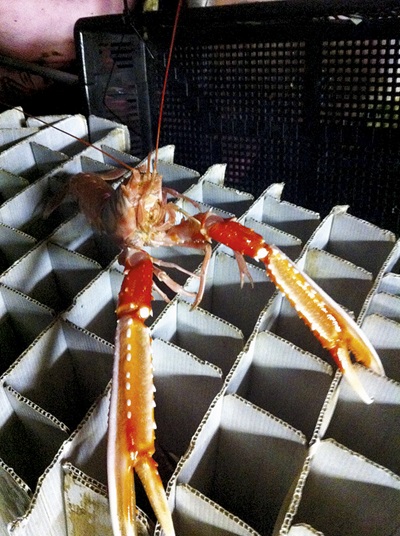 Live langoustine – or scampi – are individually packed and chilled into dormancy before transport to market.
Photo: Clint Scharfe

The live export of King Prawns should be revisited, suggests FRDC-sponsored Nuffield Scholar Clint Scharfe, whose scholarship travels included a visit to Scotland’s Isle of Skye where a premium trade in live langoustine – or scampi – has been developed.

Clint Scharfe is a third-generation prawn fisher from South Australia’s Spencer Gulf, and says the technology on board trawlers has advanced significantly since the original live King Prawn trials were undertaken in 1999 and 2000.

Fishers in the Spencer Gulf also have a far more detailed knowledge of the fishery today than they did a decade ago, which may help them target prawns specifically for live export, he says.

During his travels Clint Scharfe visited the McKinnon family, fishers on the Isle of Skye, who had been able to develop a premium, niche market for live langoustines (Nephrops norvegicus), also known as Dublin Bay prawns or Norwegian lobster, and served to diners as scampi.

The langoustines are trawled in the conventional way in water 100 to 500 metres deep off the coast of Scotland, although for the live market fishers use creel pots. The small fleet on the Isle of Skye has perfected the art of live capture and transport of the crustacean, which is sold into Europe.

The live product has attracted a premium price, which has also increased the value of fishing licences.

The live langoustines are stored and transported in tubes and plastic dividers in the storage crates prevent damage and cannibalism. During transport the water temperature of crates is reduced from 8°C down to between 3°C and 5°C to trigger dormancy, which significantly reduces mortality.

Australia was successfully exporting live farmed Kuruma Prawns to Japan in the 1980s and 1990s, transporting animals in chilled wood shavings. At its peak, prices reached $300 per kilogram, before the market crumbled in the face of disease and falling prices.

A decade on, Clinton Scharfe believes further investigation of opportunities for live, wild-caught King Prawns are worth considering.

In addition to the Scottish scampi fishery, he investigated the benefits of environmental accreditation in overseas markets, and new technology for the prawn industry.

With the price of prawns falling in the past 15 years, he says every effort is needed to add value to their product. As an active supporter of the Spencer Gulf Prawn Fishery’s Marine Stewardship Council sustainable certification, he says this is one investment he is confident will pay dividends.

Following certification in 2012, the fishery has received increased inquiries, particularly from Europe, where environmental accreditations are strongly supported.

Clinton Scharfe reports that the Belgian seafood company Setraco replaced non-certified scallops with an environmentally accredited product, which resulted in increased sales at a 30 per cent higher price, when there was otherwise little difference between the two scallop suppliers.

“For this very reason, Setraco agreed to meet and discuss the possibility of a relationship with Spencer Gulf King Prawns sourced from SA,” he says. But there will also need to be a greater focus on marketing and differentiating the Australian product in international markets.

He says he quickly realised during his travels that Australia’s fisheries management was second to none, and that a global system of labelling was needed to accurately identify both products and country of origin.

This would help to further enhance and protect the reputation of Australian seafood, including high standards of sustainability, quality and food safety.

As part of his scholarship, Clint Scharfe also visited a Danish company that manufactures a continuous cooker, which could be used on board a trawler. The equipment was “very impressive and has good potential, but there would need to be a more regular demand for cooked prawns.

“At this stage, most of the demand is pre-Christmas and at Easter, when consumers are looking for the ease of pre-cooked product. The rest of the year, the demand is for green prawns.”