It is easy to see how changes in river flows affect trees and waterbirds, but researcher Alison King has taken on the greater challenge of identifying the effects of a river’s fish populations

Environmental flows have long been an important issue in the Murray–Darling Basin, one of the most regulated rivers on earth. In contrast, northern Australia is home to some of the world’s last remaining unregulated river systems.

However, ongoing interest in developing the north, particularly for irrigated agriculture, could see these rivers put under pressure unless any development is carefully managed.

Having studied the effects of environmental flows on fish in the Murray–Darling Basin for more than a decade, ecologist Alison King is now applying her insights and experience to  Australia’s northern waterways.

When the need for environmental flows in the Murray–Darling Basin was first raised in the 1980s and 1990s, there was little information about how they would work, and how to achieve the best return from the use of the water, according to Alison King.

She was part of a team of researchers from the Victorian Government’s Arthur Rylah Institute for Environmental Research working to provide evidence on the benefits of environmental flows for fish in the Murray River. 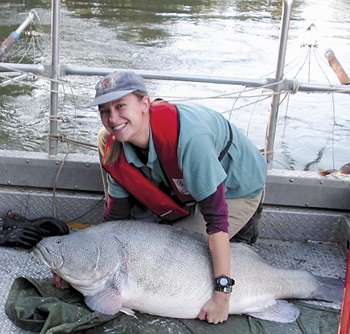 Now there is a substantial body of work that is helping to finetune the delivery of these flows to maximise the ecological benefits, including her own five-year project focused on the Murray River and flows in the World Heritage-listed Barmah–Millewa Forest.

Her research in the forest from 2002 to 2007 included much of the Millennium Drought period. In 2005, an environmental flow of 513 gigalitres was delivered to the Barmah–Millewa Forest, on the Victorian–New South Wales border, east of Echuca. The flow was delivered over three months, from October to December.

“It was the first time we have been able to demonstrate that environmental flows were having positive outcomes for native fish,” she says.

She was part of a technical committee providing advice to the Murray–Darling Basin Authority to optimise environmental flows at Barmah–Millewa Forest for improved ecological outcomes.

“We were able to design the flow to target fish spawning, and we got the response we wanted. We found that quite a few fish species responded to the flood conditions. Golden Perch (Macquaria ambigua) and Silver Perch (Bidyanus bidyanus) were the two main species, and significantly increased their spawning activity during the environmental flow.”

She says pulses in the delivery of the environmental flows seemed to help trigger spawning. The fish did not spawn as soon as flooding began; warmer temperatures and repeated rises in flow were important.

Other species such as Trout Cod (Maccullochella macquariensis) and Murray Cod (M. peelii) showed improved recruitment following flooding of the forest region as a result of the environmental flow. Alison King says it is likely the flooding provided access to more food and suitable rearing habitats, helping more young fish to survive.

Benefits from the environmental flows were also reported for other flora and fauna, such as waterbirds and vegetation.

“All in all, when you looked at a whole-of-ecosystem perspective, the environmental flow was seen as very successful.”

She says there were several presentations to local communities about the research findings.

“Many locals love and enjoy the forest and the river, and can see benefits in the flourishing wetlands and trees, where the water birds come in en masse and breed and trees turn green again; these are obvious things. It is a lot harder to identify what is happening with fish because you can’t see under the water. So the research was able to tease some of that information out and explain it to the community.

“We also learnt a lot about the balancing act of environmental flows and flooding, as recent events have highlighted there are some ecological risks associated with inundating floodplains.”

These include increasing the breeding of exotic species, most notably European Carp (Cyprinus carpio) and Oriental Weatherloach (Misgurnus anguillicaudatus); and increasing the potential for a ‘blackwater’ event.

When the Millenium Drought finally broke in 2010, she says up to 2000 kilometres of river were affected by black water – stained by tannins leaching from accumulated organic matter on the floodplains.

The organic matter was rapidly consumed by microbes, depleting the water of oxygen and making it difficult for many fish to breathe and resulting in widespread fish and Murray crayfish deaths.

She says the rebuilding of both fish and crayfish populations will be largely reliant on recruitment and migration of animals from outside the affected areas and could take many years. 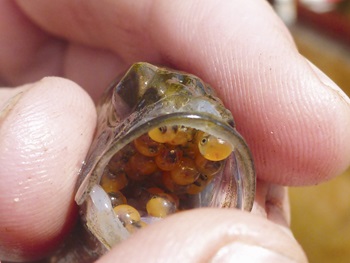 In 2012, Alison King joined Charles Darwin University as a principal research fellow. In this role she is working as part of a team in the National Environmental Research Program’s (NERP) northern Australia hub and is now investigating how different types of flow in northern Australian rivers affect various tropical freshwater species.

Northern Australia’s rivers are still largely in their natural state, but ongoing interest in developing the north could see the environment competing with other water users. Alison King is using her experience in the Murray–Darling Basin to address environmental flow questions in northern Australia, specifically how flows influence recruitment, total abundance and key life-cycle attributes of several fish species.

“We’re interested in a range of fish species, such as the iconic Barramundi (Lates calcarifer), and those that are important to Indigenous communities such as Sooty Grunter (Hephaestus fuliginosus) and catfish species, and also smaller-bodied species with no recreational importance, such as rainbowfish and archerfish, which are an important part of the ecosystem”.

“The diversity of fish species is much higher in the north than in the southern rivers, and we are missing even basic biological information about many species. It is likely that land and river management may change, and we are trying to get more information about how important flow is so we can manage and reduce any potential impact on the environment.”

Alison King’s research is focusing on the Daly River, while other aquatic researchers in the NERP northern Australia team, which includes David Crook, Michael Douglas and Stuart Bunn, are focusing on movement patterns of fish in the Alligator Rivers region in Kakadu National Park.

“We think water extraction will mostly affect the dry season flow – the lower flow period. But we know little about its ecological importance for fish. The wet seasons appear to drive the ecosystem, so we are also investigating how important the preceding wet season is, or the one before that, to the resilience of fish during the dry season.

"We want to know where fish go across the range of flow conditions, what areas they use and why, and what they need to reproduce and survive.”

There is so much to learn, and fish research in the north, she says, is really just getting started.

Alison King presented an overview of her work to the Australian Society for Fish Biology’s annual conference, as the winner of the society’s 2012 Early Career Excellence Award.