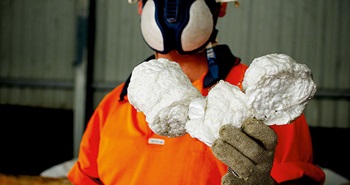 Shredded, shrunk and compressed, polystyrene boxes are recycled for use in a variety of plastic products. 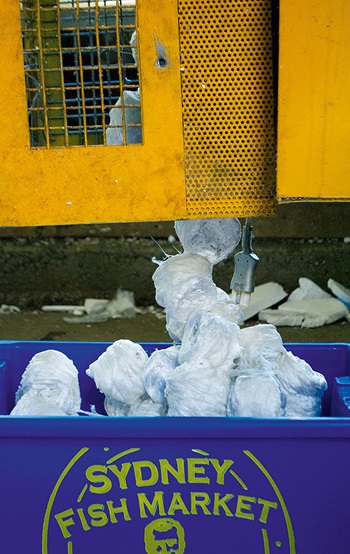 Along with the 14,500 tonnes of seafood traded every year at Sydney Fish Market comes an awful lot of polystyrene box packaging.

These boxes have traditionally been sent to landfill, stamping a significant footprint on the environment. But that footprint is now being dramatically reduced thanks to recycling technology that is transforming the way the market disposes of its waste.

In a six-month trial, a specialised recycling machine bought with an Environment Protection Authority grant of more than $50,000 has been “working its little heart out” diverting the majority of the market’s polystyrene box waste from landfill.

Sydney Fish Market general manager Bryan Skepper says that over the trial period more than 28 tonnes of polystyrene was processed. That equates to more than 56,000 average-size non-degradable boxes saved from clogging up landfill.

Instead of polluting the environment, the recycled boxes are shredded, heated, shrunk and transformed into small odour-neutral blocks, roughly the size of a softball. The compressed material is then re-sold to make hard plastic products such as CD cases, letterboxes and fence posts.

“The aim is to divert the boxes used for packing fish out of the waste stream and into a product that can be re-manufactured … so in effect closing the loop on the polystyrene box,” Bryan Skepper says.

The machine’s operating costs over its first year, including the trial period, are estimated to be about $70,000, representing an overall marginal net cost. However, as the market implements its site-wide waste management plan, in which the machine will become a permanent fixture, operational efficiencies are expected to reduce that cost.

Under the plan, the recycling program will be expanded over the next two years to include cardboard, bottles, cans and shrink-wrap plastic.

“Equipment to process these materials will be implemented over the next six months at a cost of $250,000. In three years, 40 per cent of all waste from the markets will be recycled,” Bryan Skepper says.

“In the end, our price-modelling is showing it will probably be very close to cost-neutral, and for the tenants that really embrace recycling in a consolidated way, it might be a financial saving to them.”

Traders can dispose of boxes into the on-site recycling system for free, while there is a charge for sending waste to landfill. Making recycling the cheaper option is expected to encourage more traders to make use of the new system.

Bryan Skepper says this strategy may cost more in the short term, but there will be savings in the long term. More importantly, it will divert more than 100,000 polystyrene boxes each year from landfill and transform them into useable products.

“There are social benefits brought by the recycling program, simply from tenants feeling good about their actions: a major upside of the initiative,” Bryan Skepper says.

It is also a validation of the broad Sydney Fish Market strategy developed over the past six months, which puts social responsibility at its core. This includes the supply and promotion of seafood harvested responsibly, as well as ensuring its own activities are environmentally sustainable.

The waste recycling program has been implemented under that strategy as part of the market’s commitment to innovation, and its waste management plan was developed as part of an environmental management system, which is certified against the international quality assurance standard ISO 14001.

“It makes a lot of sense to go down this path,” Bryan Skepper says. “If you are going to be good corporate citizens, you’ve got to invest in this type of approach.”

Sydney Fish Market’s recycling of expanded polystyrene is supported by the NSW Environmental Protection Authority and the Australian Packaging Covenant.