Comparing apples with oranges may be difficult, but at least they are both fruits. Infinitely more difficult is the comparison of fish and beef, of sea and land-based foods – and particularly the environmental impacts of production. 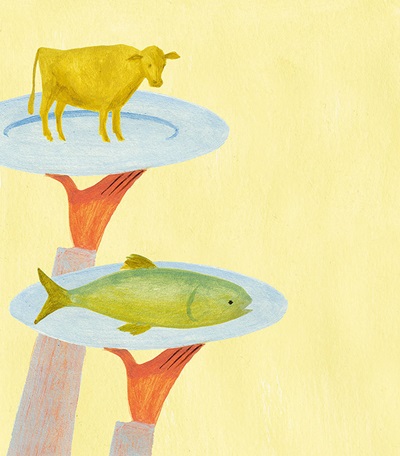 Tasmanian researcher Bridget Green will travel to Sweden later this year to help establish new biodiversity measures that will allow the production methods and effects of fishing to be compared more equitably with other food production systems.

Bridget Green says fisheries often seem to be left off the agenda when it comes to discussions about feeding a growing population.

“Fisheries also seem to get a bad rap when it comes to sustainable food production,” she says.

“But different standards are used to assess the sustainability of fisheries, compared to land-based agriculture.

“There are different moral perspectives applied to what is acceptable on land and in the oceans.”

While fishing generally leaves a functioning ecosystem, this is not the case for agriculture. In many cases, terrestrial production is based on fundamentally changing the natural environment to produce food as efficiently as possible.

Bridget Green says there is a perception that eating fish is an environmentally unsustainable choice.

“However, wild fisheries don’t have the freshwater inputs that land-based farming does in countries such as Australia. They don’t use antibiotics, fertilisers or pesticides. Wild fisheries have a lower carbon footprint than chicken, pork or beef. Wild-caught fish, in fact, offer one of the most environmentally sound choices there is.”

The comparison of biodiversity impacts by different food production systems is one of several initiatives to come from a series of Australian workshops focused on the role of fisheries in the national and global foodbowl. The workshops were designed to develop a research framework that would outline the development of a life-cycle assessment (LCA) for fisheries products.

Held in Tasmania in February 2012 and 2013, the workshops were funded through the Australian National Network in Marine Science. Researchers from the University of Tasmania, WA Fisheries, James Cook University, the University of Washington, Dalhousie University in Canada and the European Commission’s Joint Research Centre Institute for Environment and Sustainability have all been involved.

Discussions from participants at the first workshop, including leading national and international fisheries experts, considerably broadened the scope of the research directions that emerged.

Several concepts were refined at the second workshop and more than a dozen scientific papers are expected to be produced that will report on different issues related to the production from fisheries within the global food network and food security.

“The group began to consider other issues, such as how susceptible fisheries are to fuel price spikes, which have happened before, and how that might affect production and as a result food security,” Bridget Green says.

The initial focus of the project is to develop life-cycle assessments for four sample fisheries: Tropical and Southern Rocklobsters, Banana Prawn and the Commonwealth trawl fishery. Bridget Green says the findings broadly reflect those of similar international LCAs.

However, as with all primary industries, there is a range from inefficient to efficient. For example, purse seine and trawl fisheries with freezers on board are highly efficient, but some can have issues with bycatch, which reduces efficiency.

The rocklobster fishery is highly efficient in terms of catch harvested from a comparatively small geographic area and there is virtually no bycatch. However, transport of product to high-value international markets adds to the carbon cost.

Bridget Green hopes her trip to Sweden, working with the Swedish Institute for Food and Biotechnology’s Sustainable Food Production department, will help to develop the ways to incorporate biodiversity impacts, such as bycatch and ecosystem functions, into LCAs, along with resource use and greenhouse gas emissions.

In another project, Nathan Pelletier, from the European Commission Joint Research Centre Institute for Environment and Sustainability in Italy, has taken the lead on research into the effects of fuel price spikes on fisheries.

Many countries in the developing world were identified as being highly susceptible to fuel price spikes, because of a high reliance on seafood in their diets, and lower adaptive capacities.

These included India, Chile, Peru and Ecuador. Norway and the UK had moderate vulnerability, which was unusual for developed countries, but may be because of their high levels of fuel use for fishing and reliance on the industry for food and jobs.

Seafood makes up a comparatively small portion of Australian diets, and Australia is among those rated with low susceptibility to fuel shocks, along with the US, New Zealand, Spain, France, Canada, Japan, Belgium, Algeria, Czech Republic, Israel, Ukraine and Finland. High scores for adaptive capacity in these countries contribute to a lower susceptibility rating.

A third research area to emerge from the workshops is evaluating the cost-benefits of marine protected areas for future fisheries production.

Bridget Green says the introduction of marine protected areas will have an impact on fisheries production and the environment. Exactly what they are is hard to say at this stage. New research will look at some of the effects, both intended and unintended, that preservation decisions may have on the efficiency of fishing effort, greenhouse gas emissions and food production capacity.

“With the need to feed nine billion people by 2050, it will be a struggle to do so from land alone, and we’re going to lose a lot of arable land from production during the next 20 to 30 years, so we have to keep an open mind about where that food may come from,” Bridget Green says.

“As scientists, we’re trying to identify how different values underpin decision-making and to evaluate the trade-offs so that managers can make better decisions, but it will always be difficult to marry all the different priorities together.” 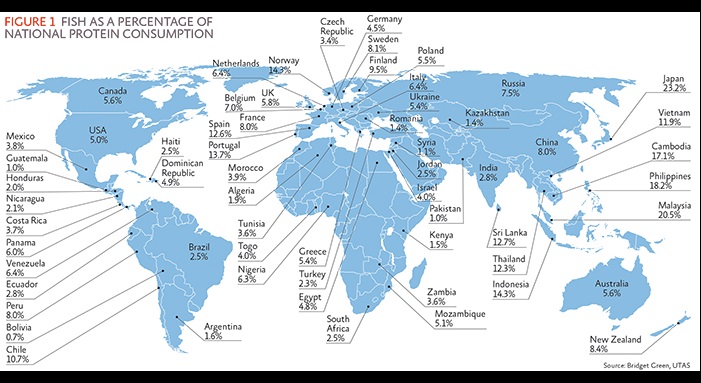 Figure 1  Fish as a percentage of national protein consumption.

As part of her PhD thesis, Anna Farmery is researching the sustainability of fisheries in terms of the environmental footprint, rather than sustainable harvesting of the biomass.

She has analysed the Tasmanian Southern Rocklobster fishery against several environmental indicators as part of a life-cycle assessment and compared the likely effects on these indicators under a range of different management scenarios.

Under the current management arrangements, the combined effects of harvesting, processing and delivery to export markets in China include 32.28 kilograms of CO2e per kilogram of live rocklobster harvested. Water use is 22.43 litres, cumulative energy use is 487.37 megajoules, the eutrophication impact is 0.04 kilograms, and contribution to aquatic toxicity is 4.88E-10 DAY.

As part of her work, Anna Farmery has compared:

Anna Farmery says the scenarios suggest that a management regime based on MEY without pot limits could most significantly reduce the potential environmental impacts.

The interim MEY scenario showed potential reductions of about half the indicators compared with the unlimited MEY scenario in both the harvesting and supply chain.

The introduction of no-take areas increased potential emissions across all fields, including an increase of carbon emissions, eutrophication potential and energy use by more than 23 per cent during harvesting.

Anna Farmery says this is because the implementation of no-take areas increased the effort required to achieve the same catch levels, as there was no corresponding decrease in total allowable commercial catch in the fishery.

While the aim of the project is to highlight some of the unintended consequences of fisheries management decisions, there is always some kind of trade-off involved, she says.

Based on this modelling, if producing food or maintaining employment were priorities, then MSY provides a better scenario, while MEY would be more effective in maximising returns for fishers and reducing environmental effects.

Other aspects of her PhD will focus on the environmental footprint of imported fish compared with domestically produced fish.

The international information will be sourced from available literature and will focus on imports such as prawns from Thailand, Basa from Vietnam, lobster from Europe and the US, and tuna and other fish from around the globe.

She will also compare the effects of fish production with other forms of protein.

“We already know that fish and seafood are low water users. My rocklobster research showed water use of 22 litres per kilogram of live rocklobster harvested, across the whole supply chain.

As a measure of comparison, average global figures put water use for beef production at 15,500 litres per kilogram,” Anna Farmery says.