Young abalone in the fast lane 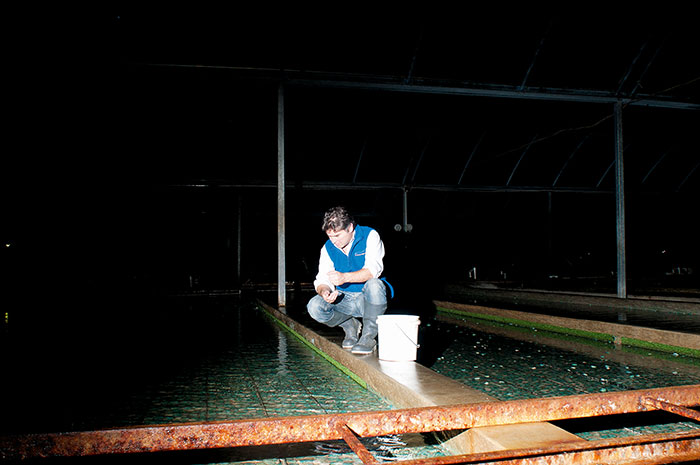 Anton Krsinich looks over one-year-old abalone that are part of a commercial trial at Indented Head, Victoria.
Photo: Clarisa Collis

New research exploring the nutritional needs of farmed abalone indicates that a feeding strategy tailored to different growth stages could increase the productivity of this lucrative industry by 10 per cent.
Production increases could add $3.5 million to the income of Australian abalone farmers, based on national exports worth $35 million in 2012, by reducing the time taken for abalone to reach market size.

The research, undertaken at Marine Innovation South Australia (MISA), has already stepped out of the laboratory and is being trialled by commercial abalone growers in Victoria and SA. The initial results are positive.

Key to the production improvements is the finding that the protein requirements of abalone vary throughout their life cycle, depending on the animal’s age and seasonal temperatures.

Young, fast-growing abalone consume five per cent more protein than older abalone, particularly at warmer water temperatures, ranging from 18°C to 22°C, that are typical in summer, autumn and spring.

Leading the research at MISA is nutrition and feed scientist David Stone, who says nutrition is a major bottleneck in abalone farming systems. Feed accounts for about a quarter of total production costs.

“Industry members have long suspected that farmed abalone were not achieving their growth potential, with one formula for feed provided throughout the 2.5-year production cycle, regardless of abalone life stages and varied seasonal conditions,” David Stone says.

Wild abalone are known to have at least two distinct feeding strategies as they develop. Young abalone graze on epiphytic organisms while older animals feed on macroalgae.

The conventional diet for cultured abalone contains between 27 and 30 per cent protein. However, the research has found that an extra five per cent protein can optimise growth in one-year-old abalone and fast-track their weight to market sizes.

Spurred by the initial laboratory trials, scientists are now collaborating with abalone producers and feed manufacturers to undertake large-scale commercial trials over 18 months.

Three abalone farms – two in Victoria and one in SA – are hosting the trials and providing the animals. Meanwhile, all three of the country’s abalone feed manufacturers are contributing a new diet, containing 35 per cent protein, at half the cost price.

The FRDC and the Australian Seafood Cooperative Research Centre have also provided $300,000 through the Australian Abalone Growers Association for the on-farm trials. Flinders University in SA and the University of Tasmania are also collaborating on the research.

“The clincher is that we have the feed companies participating with the farmers, so any improvements to feed will become available to all abalone farmers in SA, Victoria, Tasmania and Western Australia,” David Stone says. 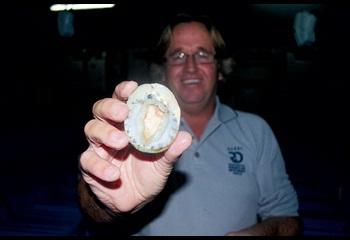 Great Southern Waters has dedicated 16 production raceways to the trials – each about 20 metres long and 2.5 metres wide. The raceways are used to grow out the abalone in dark conditions.

They are covered with a few centimetres of water pumped from nearby Port Phillip Bay via pipes that extend 0.5 kilometres offshore, so the cultured abalone experience seasonal changes in water temperature.

Growth reports are generated every three months and are based on 50 abalone randomly selected and individually weighed and measured. Another 300 abalone are bulk weighed.

After three months, the individually weighed abalone in the trial showed a 3.5 per cent weight gain compared with abalone on standard commercial feed.

The findings of the six-month growth report based on bulk-weighing the abalone in the trial showed a 12 per cent increase in weight. This suggests the commercial trials are on track to achieve the 10 per cent productivity increase demonstrated in the laboratory work.

“Because we harvest our abalone at a size that is optimal for the market, the weight increase means we can reach that point eight per cent faster, so it shaves about 2.4 months off the production cycle that usually takes about 30 months,” Anton Krsinich says.

He estimates that this time-saving reduces overall production costs by about $1.60 per kilogram, and could save the company $320,000 per year for the 200 metric tonnes of Jade Tiger Abalone® that Great Southern Waters is forecast to produce in 2013.

Better efficiency in converting food into body mass also means there is less effluent in the water used to grow out the abalone, so less nitrogen is discharged into the environment.

Although the commercial trials are due to finish in March 2014, Anton Krsinich is already looking to apply the research procedures, developed by David Stone in consultation with industry, to other areas likely to further improve abalone feed conversion rates and reduce production costs.

For example, Great Southern Waters staff plan to explore a reduction in dietary protein for abalone larger than 60 grams to save on nitrogen inputs in the winter months when sea temperatures are cooler.

Such trials could allow abalone farmers to develop a precision-feeding strategy, pinpointing the exact amount of protein required at every stage of the abalone life cycle.

He says the new expertise in commercial trials also provides scope to experiment with heating water in the abalone nurseries to stimulate growth in juvenile stock. However, this tactic is said to be unviable on the raceways due to the large volume of water that would require heating.

As a committee member of the Australian Abalone Growers Association, Anton Krsinich says the faster growth rates using new feeding strategies could help the Australian abalone aquaculture industry increase its market share in high-value export markets, which return between 12 and 16 per cent more than domestic markets.

The increased productivity could also help offset the high value of the Australian dollar in export markets, he says.

Meanwhile, David Stone has started a three-month trial to compare the protein needs of different abalone species, with a focus on Greenlip and Blacklip Abalone. These breeds attract a premium in both export and domestic markets.

Interbreeding between Blacklip Abalone females and Greenlip Abalone males is also used to develop hybrid breeds that are more productive in aquaculture systems and that satisfy the preferences of different export markets.

“We’re expecting to see the Greenlip Abalone perform better at higher temperatures of about 22°C, and the hybrids will probably be more productive at 18°C, but we’re about to find out whether that’s the case,” David Stone says.

Other research priorities at MISA include the development of diets for juvenile abalone in nurseries and abalone farming in offshore cages, possibly using a combination of commercial food and macroalgae in marine diets.

David Stone says there is a lot of interest around the world in using live food, such as cultured seaweed, in abalone feed. This is becoming a more cost-effective option as a by-product of increased seaweed production for use in pharmaceutical and oil manufacturing.

In additional research to improve abalone productivity, four PhD students based at the South Australian Research and Development Institute and Flinders University are looking at the potential for live and dried macroalgae as feed ingredients. 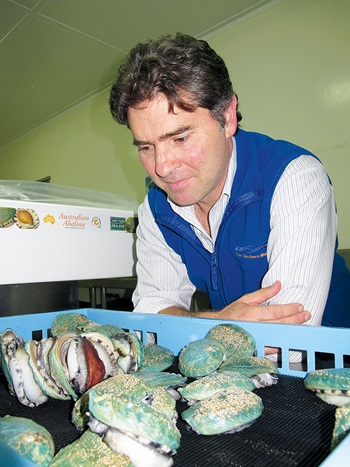 For Anton Krsinich, chief executive officer of Great Southern Waters in Victoria, increased dietary protein in young abalone could add to the production gains the company has already achieved through selective breeding.

With seed funding from the FRDC, the company’s selective breeding program developed in conjunction with CSIRO has led to a focus on farming a hybrid abalone breed, marketed as Jade Tiger Abalone® (JTA) (see Figure 1 above).

Since 2006, the move to producing only JTA instead of pure species of Blacklip and Greenlip Abalone has enabled Great Southern Waters to achieve 25 per cent faster growth rates.

In particular, the domesticated breed is characterised by a range of profitable traits, such as better growth, meat yield and survival rates in live export markets, plus the distinctive jade colour of the shell and tiger-like black stripes on the abalone’s foot.

Anton Krsinich says these traits have played a large part in reducing overall production costs, which have declined by about 60 per cent in the past seven years.

Now Great Southern Waters aims to use genetic improvement as a mechanism to further optimise the 10 per cent lift in productivity that higher dietary protein in young abalone is expected to provide.

This means examining 270 parental abalone lines so that nutritional requirements, such as protein and feed-conversion efficiency, can be added to the selection criteria in the company’s ongoing breeding program.