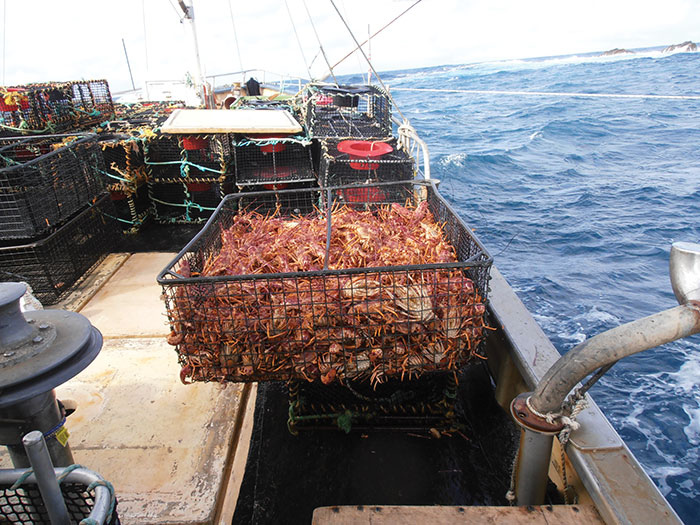 A tray of Southern Rocklobsters collected off Tasmania’s south-west coast are lifted from the well of the boat just prior to their translocation to their new reef home in shallower waters.
Photo: Randall Harper

Over the past two fishing seasons, 160,000 Southern Rocklobsters (Jasus edwardsii) have been relocated from the deep, cold waters off Tasmania’s south-west coast to reefs further inshore or northwards up the west coast. Here, their growth accelerates and their pale shells adopt the richer red colour that is much sought after in the marketplace.

These efforts are part of an industry-funded commercial-scale trial of rocklobster translocations that could increase the harvestable biomass of the Tasmanian fishery by more than 20 per cent on an ongoing basis.

Rocklobsters living in shallow water have more rapid growth, which means that each animal is more likely to contribute to fishery harvests. Shallow-water rocklobsters are also more desirable for marketing because of their vibrant red colour, better shape (wider tail) and because they are more robust when exported live, with lower mortality rates.

They also lay more eggs, which may assist future recruitment. In contrast, deepwater rocklobsters may grow less than one millimetre a year and many never reach harvestable size.

Fisheries program leader at the University of Tasmania’s Institute for Marine and Antarctic Studies Caleb Gardner says the commercial trial follows a successful proof-of-concept trial between 2008 and 2011.

The initial industry-driven trial involved relocating 30,000 rocklobsters over four years from an area of less than one square kilometre off the southern tip of Tasmania to eight shallow-water sites on the east coast. It was funded by the Australian Seafood Cooperative Research Centre and industry; fishers also assisted with the logistics of the translocations and data collection.

Environmental monitoring at the relocation sites showed no impact on algae, invertebrates, resident rocklobster populations, disease or fish stocks. The translocated rocklobsters generally remained in their new location and integrated with local populations.

While 30 per cent of females translocated put a hiatus on egg production for the first year, all females returned to reproduction after that time.

The growth rates of translocated females increased at their first moult and in their first year after release even exceeded those of local shallow-water females. Translocated rocklobsters increased in weight by 30 per cent, while those remaining at the source increased by only five per cent.

With these positive findings, the commercial trial began in 2011-12 when the Tasmanian Rock Lobster Fishermen’s Association (TRLFA) agreed to a levy of $10 per unit of quota, raising $105,000 a year to fund the project.

Caleb Gardner says the project essentially tests whether translocation can operate as a business enterprise. Tenders are called for the collection of rocklobsters from sites along the state’s west coast.

Businesses that tender for the work need to consider a range of factors including how far the rocklobsters are being relocated, fuel prices and other fishing activities that they could be doing at that time. The average translocation price to date has been about $1.30 per rocklobster.

The translocation does not target any particular size or gender of rocklobster; anything undersized can be collected for relocation. The translocations are ideally run in November, when catch rates are highest, although Caleb Gardner says future tenders for October may occur.

“The fishery is closed at this time, so fishers would be able to work on translocation without affecting their normal business. One of the most difficult aspects of the operation has actually been filling the translocation tenders.”

In 2011 and 2012, 60,000 and 100,000 rocklobsters were relocated respectively. There is no legal issue with loss of quota or resource among fishers because the rocklobsters remain the property of the government until legally harvested. Quota is also is state-based, not restricted to particular regional zones.

For fishers this is a positive return on investment, Caleb Gardner says. Additional annual quota can be leased on the open market for about $20 per kilogram; the same increase in catch funded through translocation equates to only $2 per kilogram.

“If translocations continue, one of the issues we need to plan for is the situation where future translocation of rocklobsters is assumed in decisions about quotas but we aren’t able to fill the tenders to relocate them. For example, in the first two years, 40,000 fewer lobsters were moved than we had planned. Fortunately, the details of the translocations that occurred meant that the quota decisions made were reasonable in this instance. But it does highlight a possible future problem.”

The trial has been funded for only two years, but TRLFA president John Sansom says industry response has been generally positive. Association members will vote on the continuation of translocation operations at their annual general meeting later this year.

“It has been an innovative management strategy,” John Sansom says.

Increasing productivity without increasing catches is high on our priority list. Translocation offers the opportunity to change a lower-valued product into a more highly valued product, through increased growth rates. When this can also forestall a decrease in the TAC it is a win-win for industry,” he says.