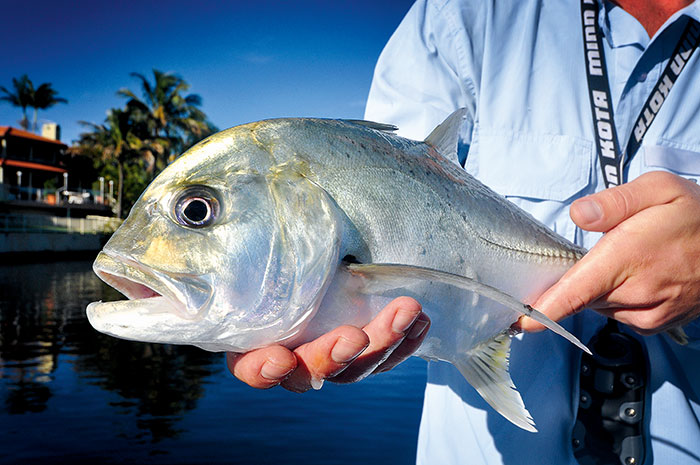 Several important species for recreational fishers including trevally are known to use sounds to communicate.
Photo: Cheyne Jones

By Matt Barwick and Geoff McPherson

Australia is home to a species of animal whose mating call is almost as loud as a rock concert. While a blue whale or other large mammal may come to mind, the call actually comes from the humble Mulloway.

FRDC-funded research has found that Mulloway produce three different call types when spawning, with some calls exceeding 172 decibels in underwater sound units when recorded from one metre away. By comparison, a loud rock concert roughly compared to underwater levels reaches about 177 decibels.

Mulloway calls can be detected from more than 110 to 400 metres away using correct equipment, and their calls can actually prove painful to divers in close proximity.

There are more than 700 fish species worldwide that make sounds as part of intricate social and reproductive behaviour. These including several recreationally important species such as Samsonfish, trevally, Dhufish, some tuna species, Spanish Mackerel, and species belonging to the family of fish we call cod, which includes Queensland Groper and Coral Trout. The Goliath Grouper, for example, advertises its presence with such power that they can be heard up to 2000 metres away.

Fish species have developed the ability to produce sounds in a variety of ways, including drumming their swim bladder with specialised muscles or bones, as well as hydrodynamic tail slaps, fin flicks, fin spine extensions and jumps.

Recreational fishers have known for years of the noise-making ability of many species they catch. Some fish have earned common names like grunters, croakers, blurters and yakkas as a result. The ability of fish to hear has also helped to shape our fishing practices and anglers have been tiptoeing along the riverbank ever since.

So why do fish species use the ability to make and hear sounds? Finding a mate appears to be the primary reason. In some species, huge groups of males form and they call together to attract females to their large aggregation.

This underwater acoustic communications opens new avenues for research. Overseas researchers have developed innovative techniques to monitor the size of the spawning stock of species such as Coral Trout and jewfish using passive acoustic recording. Other researchers in Australia have explored ‘calling’ pest species such as Tilapia into traps to control their populations.

The fact that many of our fish species both make and respond to sounds raises questions about the impact of human-generated sound. In the US, the sound of a faulty gearbox on a vessel in the albacore fishery was inexplicably associated with increased catch rates.

International research has suggested that sounds of large ferries, and even outboard motors, may affect fish, increasing their heart rate or even disrupting cohesion of schooling. There is a need to better understand the potential effects of sound on fish stocks, particularly in areas of intense shipping activity, or perhaps seismic exploration/drilling activity.

Research has also shown that larvae of corals, crabs and fish (at least) are attracted to the sounds made by reef complexes, and may use these sounds to navigate towards their eventual home. It is possible that increases in background noise levels may make it harder for them use their ‘sonic compass’.

Researchers have highlighted concerns that increasing noise levels may mask the communication of adults (basically drowning out the conversation), perhaps making it more difficult for them to find a mate.

Recreational fishers intuitively recognise the need for a stealthy approach to maximise catch rates, and the rapid adoption of the use of electric motors, drift fishing in open waters, use of poling platforms on the flats, and proliferation of kayaks in recent years demonstrate various approaches adopted in the search for increased strike rates.

While reduced sound during fishing activities may reduce negative effects on fish behaviour and help maintain catch rates, it may be valuable to gain a better understanding of the impact of noise pollution on key recreationally important fish species.

Some Australian states have no regulations relating to underwater noise in fishery management plans and do not recognise noise as pollution. Establishment of long-term baseline monitoring programs would help to track how noise levels are changing over time as development continues to increase.