Six challenges for our marine nation 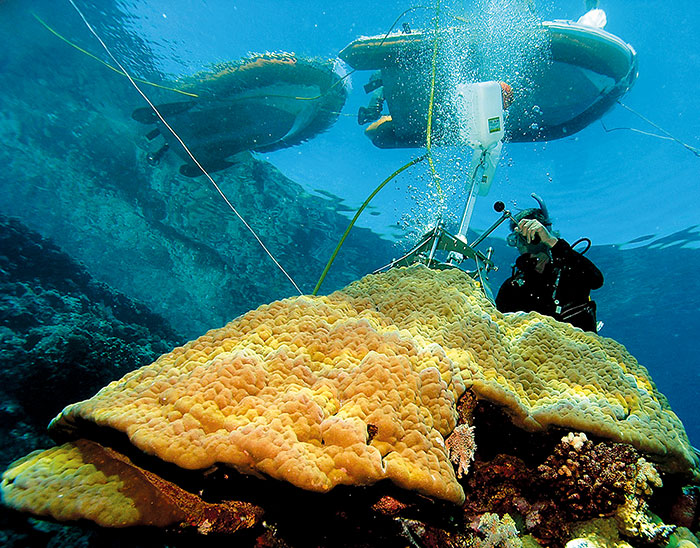 Our national anthem sings the praises of our ‘golden soil’ but perhaps a more significant phrase is ‘girt by sea’. Australia’s oceans contribute about $44 billion each year to our economy, and that figure is projected to more than double by 2025.

“We figured it was time, not just to write a statement of intent but to really try to outline what we thought were the big challenges facing Australia,” John Gunn says. “The marine science community is united in wanting to assist Australia to meet those challenges.”

The challenge of food security has particular relevance for the fisheries industry, which contributed a gross value of $2.23 billion to the national economy in 2010-11, according to the Australian Bureau of Statistics.

John Gunn says there is significant opportunity for future growth in fisheries and aquaculture. Globally, aquaculture is expanding rapidly to meet growing demand for seafood. In 2009, fish accounted for about 16 per cent of animal protein consumption.

The report indicates that Australian aquaculture production, and associated total value, has increased substantially during the past decade, from $0.68 billion in 2000 to $0.87 billion in 2010.

“The document basically says that the path to sustainability has certainly been well charted and now what we must do is value-add – we must make sure that every tonne of catch is worth as much as possible in a food security way and in economic returns,” John Gunn says.

For example, developing cost-effective and sustainable aquaculture feeds and moving from reliance on wild broodstock to focusing more on domesticated, selectively bred stocks.

The report has also highlighted some additional challenges for wild fisheries management, such as improving data on fish stocks, mortality and total economic value, and moving towards ecosystem or multi-species approaches to fishery management.

“This will require a more detailed understanding of complex food-web dynamics, the effects of changing baselines on fish stocks and the ecosystems that sustain them, and the social and economic drivers and impacts of fisheries,” the report says.

The report has reasserted the value, importance, independence and credibility of Australian marine science; it has recognised the limited dollars available and the need to better coordinate, collaborate and plan for marine research to be done in Australia; and it has developed an effective planning framework to clarify priorities for resource allocation and areas for investment in marine science.

“There is a critical need to investigate resource allocation for the marine environment. From the professional fishing industry and the aquaculture industry, that is going to be a central plank of all resource management, in my view, over the next 12 years,” Martin Exel says.

“From where I sit, the marine parks debate and a number of other major negative fisheries issues from the past 18 months have largely been around resource allocation,” he says.

“There are different groups angling to promote their views over others, and so having a structured framework to deal with resource allocation within our marine environment and deal effectively and scientifically with society’s changing views on appropriate use of our waters is critical.”

Recognising that marine science is relevant to a range of disciplines and institutions, the OPSAG has called for more investment in significant national research infrastructure such as data networks, research vessels and large-scale experimental facilities.

It has also called for a plan for the next decade for marine science and the establishment of a formal national marine science steering committee “with the specific remit to coordinate provision of strategic advice to government and develop the marine science strategy”.

John Gunn says following the release of the report, the next step is to use it to guide development of a strategic plan to address each of the six challenges identified and to identify how science can help each of the sectors involved go forward.