The inland nurseries of many sought-after Australian marine fish have been losing out in the battle for competing land uses, but a new study finds a cooperative approach can help redress the balance 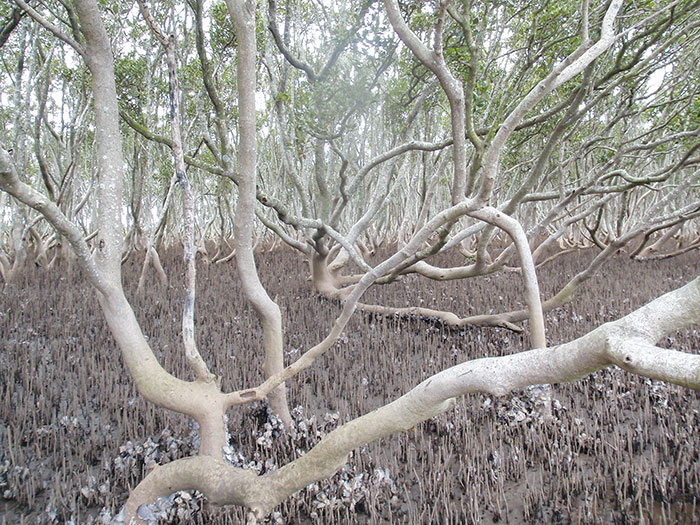 Healthy mangroves on the Crookhaven River, near Nowra, NSW, provide an essential nursery for many popular recreational and commercial fish species.

The vital role of estuaries, salt marshes, tributaries and wetlands as nurseries for many of Australia’s favourite fish is receiving much-needed attention with a new series of reports assessing how functional these areas remain and potential restoration efforts to improve their productivity.

The first of these reports, Revitalising Great Barrier Reef Estuaries and Coastal Wetlands, has been completed, with an Australia-wide report to be completed later this year. Author Colin Creighton says the importance of estuaries and wetlands in fish life cycles has been well known for many years.

“But we’ve somehow forgotten, not thought about or not really taken account of, all the little small changes to our estuaries.”

Colin Creighton also chairs the FRDC’s climate change adaptation/marine biodiversity and fisheries committee. He says the reports have come about partly because of concerns about how fisheries would adapt to a changing climate, and the role that oceans play in sequestering carbon – so-called ‘blue carbon’.

But the focus has returned to basics, in terms of improving estuarine and wetland productivity.

In the Great Barrier Reef region more than three-quarters of the commercial fish catch, and as much as 90 per cent of the recreational catch, spend at least part of their life cycle within estuaries and inshore wetlands, according to the report.

Commercially and recreationally important species such as Common Coral Trout (Plectropomus leopardus), Mangrove Jack (Lutjanus argentimaculatus) and Barramundi (Lates calcarifer) all have a juvenile or a larval phase in an estuarine environments.

However, these habitats have been suffering significant losses due to agricultural, infrastructure and urban development. More than 80 per cent of fresh to brackish wetlands in the Great Barrier Reef catchment have been lost, particularly in the wet tropics and Mackay-Whitsundays region. 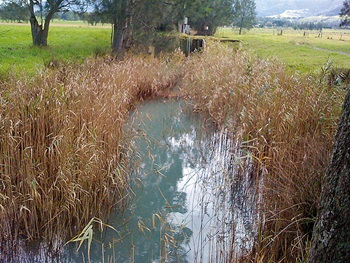 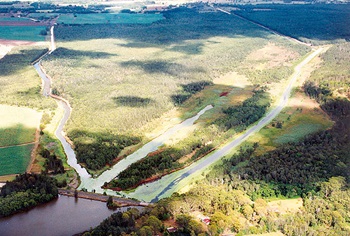 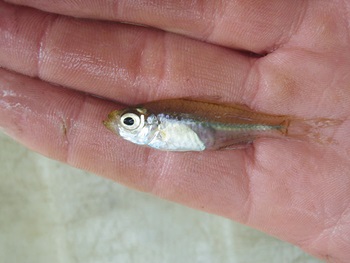 There are several key threats to estuaries and wetlands, Colin Creighton says. At one level, these habitats have simply disappeared, making way for urban development and agriculture.

A more insidious threat is the loss of connectivity in remaining wetland systems – cutting the habitats off from life-giving tides that bring flushes of oxygen, nutrients, microorganisms and macroorganisms, and clean water.

“Tide drives estuary productivity – without tide, there is no productivity,” Colin Creighton says.

“Along the eastern, southern and south-western coasts of Australia, we’ve lost the tide getting into our salt marshes. Turbidity has wiped out the sea grasses and mangroves are not getting the tide anymore. The fresh to brackish wetlands where species such as Mangrove Jack and Barramundi spend the first two-and-a-half years of their life, post-spawning are blocked off and they’re no longer accessible.”

Connectivity loss is a global problem, says fisheries ecologist Marcus Sheaves, based at James Cook University, who was a contributor to the Great Barrier Reef report.

“Coastal habitats are the places where we live, where we work, where we go to the beach, where we do all the development. In Asia, if you look at coastlines and estuaries on Google Earth, the whole thing is covered with aquaculture ponds and paddy fields, everything is developed.”

In Australia, even in the undeveloped areas, these habitats are still being affected, he says. For example, Bowling Green Bay, a national park north of Brisbane, is recognised internationally as a significant wetland. However, there is only one estuary on the bay, out of about 30, that does not have some sort of physical barrier on it.

It does not need something as big as a dam or a causeway to block movement of the tide, Marcus Sheaves says.

“Cane and cattle farmers want to stop the saltwater intrusion; those few biggest tides of the year, if you can stop those getting in, you can have a lot more freshwater land. You don’t need to build much – often it’s just a very small mound of dirt or a bit of concrete across a little bit of a waterway, a drain almost.”

But they add up. Marcus Sheaves says at last count there were about 1500 bunds across the Burdekin irrigation area of north Queensland. These barriers not only prevent tidal water from reaching the wetlands and salt marshes, but also stop juvenile fish from reaching nursery grounds. For the wet tropics, more than 5500 blocks to connectivity were counted.

For drier regions to the south, such as around the Fitzroy River, massive areas of salt marsh have been lost to ponded pastures. In many cases the agricultural production from these ‘reclaimed’ areas is low.

“Like ‘a death of a thousand cuts’, it’s been going on for a long while,” Marcus Sheaves says. It is particularly damaging to iconic species such as Barramundi.

“They live throughout the estuary in the freshwater, but they move down to the saltwater to breed. So they breed in the mouths of estuaries when there’s a flood, and then those babies have to get back up into places like big flooded wetlands,” he says.

In these wetlands, they are relatively safe from predators and can enjoy an abundance of insects and grubs to eat; however, as the water contracts after the flood, the young fish are trapped behind barriers.

According to Pia Winberg, director of the Shoalhaven Marine and Freshwater Centre at the University of Wollongong, another issue – one that particularly affects the Shoalhaven region on the New South Wales south coast – is acid sulfate soils.

“These transition and riparian zones in the floodplains and the tributaries are being changed functionally. You can’t say there’s less of it, just that it’s not functioning any more as a habitat, as it used to, and that’s because not much lives in a pH of 3.”

She says what can often happen is that a barrier built to prevent seawater from reaching an area also allows freshwater to build up behind it. In a flood, that ‘dead’ water behind the barrier, which has a low pH and virtually no dissolved oxygen, can be released as a big pulse into the estuary.

“So you have a physical barrier to fish recruitment and productivity but it’s also a chemical barrier because of the changes to pH and oxygen, simply because you’re not allowing a buffering of tidal water to go up and down these zones,” Pia Winberg says.

In the Shoalhaven River south of Wollongong through to the Clarence, Richmond and Tweed Rivers in northern NSW, this and other damage to estuaries and wetlands is affecting popular fish species such as mullet, flathead and bream. She says it has almost certainly contributed to the decline of the area’s prawn industry.

Given the size and complexity, what are the solutions? Colin Creighton says some are simple. A solid causeway blocking tidal flow to a lake could be replaced by culverts that allow movement of water and fish, as has been installed in Shallow Channel at the entrance to Lake Wooloweyah on the Clarence River in northern NSW.

“Two culverts are now in place and probably at least two more are needed, but it’s a start,” he says.

Another option is to replace fixed floodgates with smarter systems, Pia Winberg says. This simple structure contains a float and when open it allows seawater to pass up a channel, but if water levels reach a certain height, the float triggers the gate to shut.

“So you do get some water but the farm doesn’t have to have that maximum saltwater impact. This can reintroduce fish and prawns and primary production to those habitats that are small and intricate, but collectively very important to fisheries. Farmers and fishers can share in the benefits of a better managed estuary,” she says.

“Those little [riparian] tributaries are immensely important to recruitment because it’s where some of the big fish species can have protection in their juvenile life stages as well as access to food.”

The solution also lies in finding a way for agriculture and these vital wetland habitats to coexist, which Pia Winberg says may require “a bit of give” on both sides. If farmers can agree to retain some riparian vegetation and salt marshes on the edge of their pastures, they will have less impact on the ‘paddock’ of fishers and oyster farmers than they do at the moment.

“We will never have the massive fish and prawn populations of 200 years ago, and remember many of our cities such as Brisbane or Bundaberg are on what were previously floodplains, so more levies will be required; they’re now people places,” he says.

“What we can do is repair key habitats and tidal connections where we know previous works were mistakes .With smart investment and strong community support we can deliver a net improvement in fisheries productivity.” 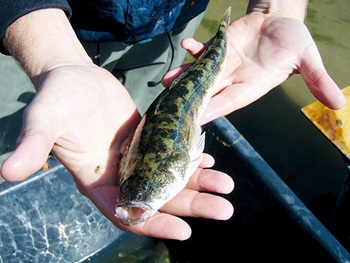 Congolli populations in the Coorong are rebuilding following the restoration of river flows and construction of fishways on barrages in the lower Murray River.
Photo: Brenton Zampatti

Until the mid-1900s, a small fish called Congolli used to migrate in huge numbers from the freshwater lower regions of the Murray River to South Australia’s vast Coorong wetlands and estuary and out into the open ocean to spawn. Young fish would then travel back up those same paths from the saltwater to the freshwater.

Then a series of barrages was built between the Coorong and the freshwater lakes that feed into it. This prevented saltwater from moving back up into those lakes – as was their purpose – but also prevented the movement of the Congolli between the river, lakes and ocean.

From those days of abundance, the Congolli is now a relatively rare sight in the region, says fish ecologist Brenton Zampatti, a senior research scientist at the South Australia Research and Development Institute (SARDI).

This is largely due to the barrages but also to the serious drought that affected south-eastern Australia during much of the past decade.

The barrages also prevented fish from moving upstream to freshwater. “Female Congolli migrate downstream in winter to spawn in the ocean and each spring and summer you get large abundances of these little juvenile fish trying to migrate upstream into freshwater.

“But the barrages essentially stop that migration and during the drought we saw massive declines in the abundance of Congolli in the freshwater reaches of the lower Murray.”

Two things have since improved the outlook for Congolli, he says. The first is the eventual easing of the drought, which restored some flow from the Murray River to the Coorong. The second is construction of fishways or fish ladders in the barrages, which the juvenile fish can use to gradually ascend to the lower reaches of the river.

“As soon as you put in a structure that regulates flow it also inhibits the movement of fish. The way to mitigate that is to build something into that structure that enables fish and other organisms to move through or over the structure,” Brenton Zampatti says.