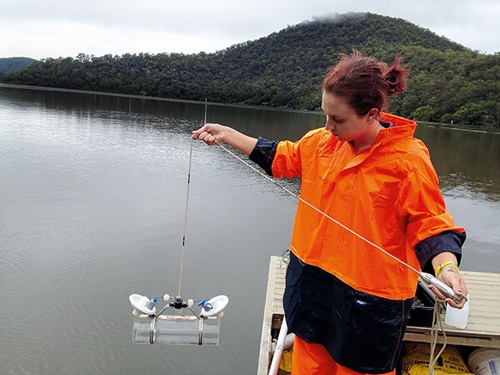 For oyster growers on the Hawkesbury River, in New South Wales, the outbreak of Pacific Oyster Mortality Syndrome (POMS) was every bit as vicious – and heartbreaking – as intimated by outbreaks in Europe and New Zealand, which halved the production of Pacific Oysters (Crassostrea gigas).

Bruce Alford, co-president of Broken Bay Oysters, was one of the Hawkesbury growers affected by the recent POMS outbreak, which began in Mullet Creek, a tributary of the river and major nursery area for most of the businesses. “It wiped out [our Pacific Oysters] in about 36 hours, probably about 10 million oysters over a three-kilometre radius,” he says.

“We watched them die. It was that violent that you could virtually sit there and watch [the oysters] open.”

Like most of his peers, he was only partially surprised by the mortality event in the Hawkesbury’s Mullet Creek.

POMS (which poses no risk to human health) arrived in the nearby Georges River in 2010. Since then, Bruce Alford and other growers have worked with University of Sydney researchers to develop mitigation strategies against the disease.

“We were expecting it, but we were still hoping that we would get another couple of years.”

The economic loss from the Pacific Oyster mortalities for the Hawkesbury growers is estimated to be more than $3 million. This was compounded in February when widespread rainfall in the catchment and release of water from Warragamba Dam resulted in the estuary being closed, and oyster harvesting was suspended until potential pollutants in the stormwater runoff had cleared.

Richard Whittington, a professor of Veterinary Science at the University of Sydney, describes POMS as the worst transmissible disease he has seen during his 30 years in the aquaculture and livestock sectors.

He and fellow researchers in the university’s Aquatic Animal Health team – Ika Paul-Pont, Navneet Dhand, Olivia Evans and Alison Tweedie – have worked even more intensively than usual on the Hawkesbury River since January to better understand the transmission of the disease.

Their efforts are supported by funding from the FRDC, the University of Sydney, the Sydney Metropolitan Catchment Management Authority and, more recently, the Australian Seafood Cooperative Research Centre (CRC) and Tasmanian Oyster Research Council.

While it is still unknown how POMS arrived in Australia, or how it moves from estuary to estuary, the research team’s experiments are shedding new light on the disease, which they expect will spread nationally. In particular, they have found that the presence of the causative Ostreid herpesvirus does not necessarily lead to an immediate outbreak of the disease.

Richard Whittington advocates various strategies of preparation for oyster growers across NSW, South Australia and Tasmania, who are as yet unaffected by the disease. These measures include diversifying the business to more than just a single species of oyster and investing in flexible infrastructure for leases.

POMS research in the Georges River has found that mortalities of adult oysters were halved if – before the disease struck – the trays were raised by 30 centimetres (so that oysters were submerged for less time as tides moved in and out).

Unfortunately for the Hawkesbury farmers in January, those who had invested in flexible cultivation systems were also those first hit by POMS in Mullet Creek, and there was insufficient warning to lift the oysters.

Being prepared also means making basic risk assessments, Richard Whittington says. “Planning for POMS must begin long before the disease arrives and needs to include things such as an assessment of the business model of the individual oyster business.

“What will be the impact of a sudden and complete cessation of cash flow? What are you going to do if, in a week’s time, you can’t sell oysters? Obviously people need to also look at debt levels.”

Ian Lyall, manager of aquaculture at the NSW Department of Primary Industries (DPI), agrees that species diversification is imperative, combined with culturing of disease-resistant oyster stock.

“This outbreak is going to lead to the most dramatic change the industry has seen in NSW in terms of risk management and business preparedness.”

At the NSW DPI’s Elizabeth Macarthur Agricultural Institute, an FRDC-funded project is also underway for developing an infection model of POMS so that it can be used to test the resistance of various Pacific Oyster families.

Another project, funded through the Australian Seafood CRC, with input from CSIRO, the NSW DPI and Australian Seafood Industries (an industry-owned company with a selective-breeding focus), is aiming to develop a POMS-resistant Pacific Oyster.

The POMS outbreak comes just eight years after QX-disease devastated production of Sydney Rock Oysters in the Hawkesbury River and prompted a switch towards the Pacific Oyster.

Now, many of the growers who made that change, such as Bruce Alford, are seeking to diversify from growing only Pacific Oysters by adding QX-resistant Sydney Rock Oysters to their production. But he says that the resistant spat can be difficult to source.

In the face of this new disease, several Hawkesbury growers have already sold up. A few others are relying on other businesses for income or have sought employment elsewhere.

Bruce Alford says most are focusing on the end of the POMS ‘disease window’, which is thought to run from October to April, when waters are warmer.

“We’ve been through QX before this, and it always works out that, given a bit of time, different techniques and opportunities arise. The biggest thing for us, and the industry as a whole, is diversifying.”

The disease poses the greatest threat to spat, which are almost always completely wiped out by POMS, as opposed to adult oysters, about half of which survive with improved husbandry (such as raising racks).

The first experiment focuses on identifying the closure of the window of infection, then putting commercial quantities of spat into the water and observing whether they can be grown out enough during winter to then be placed in a tray of elevated height for summer.

The second experiment looks at whether spat could be maintained on shore in an aquaculture system during summer. “We’re not interested in them growing, but just keeping them alive until it is safe to put them in the river. This is also vital information for hatcheries,” Richard Whittington says.

Bruce Alford says that he and other growers are also evaluating possibilities for sourcing larger juvenile oysters of 40 millimetres from Tasmania that would require a shorter grow-out period than the current 2.4 millimetre spat that they purchase from hatcheries. To do this would require an amendment to NSW oyster importation protocols following assessment of an import risk analysis.

“If we can grow them through that safe window of May to October, we might be able to get them up to a saleable size, and therefore still have cash flow,” Bruce Alford says.

Clues to a contagion

While Pacific Oyster Mortality Syndrome (POMS) first arose as a threat to aquaculture in Australia in 2010, little is known about its transmission here or overseas. The University of Sydney Aquatic Animal Health team, which has worked closely with the Hawkesbury growers since 2011, was well positioned to study the POMS outbreak as it unfolded when the disease hit the Hawkesbury in January 2013.

The intention is that any new findings might help the industry to develop an early warning system that would give growers enough notice of imminent infection so that they could take mitigation measures, such as adjusting their infrastructure or accelerating harvest.

The findings of the Aquatic Animal Health team have first and foremost challenged a long-held theory that POMS is caused by oyster-to-oyster transmission. Richard Whittington says that the rapidity of onset and destruction in Mullet Creek in New South Wales, with an area of three kilometres, would not be possible if the virus was jumping from oyster to oyster.

“We’ve discovered that this virus actually arrives in the river quite some time ahead of any signs of disease. Based on testing archived samples we think it was present in the Hawkesbury as early as October 2012 in small quantities. We feel that there must be an environmental trigger for this disease to erupt,” Richard Whittington says.

A clue to what this trigger might be is in the distribution of dead oysters within longline baskets and 24 test trays in the Georges River.

“We are finding that oysters that start to die in the top left-hand corner of a tray, do not necessarily spread the virus either to the tray next door or to the neighbouring segment of the same tray. In fact, the distribution of the deaths is quite scattered and ‘clustered’,” he says.

Similarly, adjacent baskets on a longline will not necessarily experience the full-blown disease, with healthy baskets on some longlines bordered by baskets containing dead oysters.

“This pattern tells us that the virus is not uniformly distributed in the water. It is actually packaged in the water. You can imagine a raft of virus particles being carried along, then encountering part of an oyster lease,” Richard Whittington says.

He and postdoctoral fellow Ika Paul-Pont recently published a hypothesis in the journal Diseases of Aquatic Organisms that something in plankton, which oysters filter, is carrying the virus.

“The general understanding of plankton is that it travels around a bay in tight packets. They’re not randomly or evenly distributed at all.”

For more research results and a complete diary of the outbreak as it unfolded in January, visit the Oyster Health Sydney website.