In the past seven years, scientists monitoring the Western Rocklobster (Panulirus cygnus) fishery off the coast of Western Australia have recorded low levels of the lobster’s late-larval-stage juveniles, called puerulus.

Puerulus numbers are highly predictive of the recruitment of legal-sized rocklobsters in the following three to four years, and the lack of knowledge about the causes of low puerulus settlement was identified as a risk for the industry.

Nick Caputi at the Department of Fisheries WA says in the past ocean temperatures and wind patterns had successfully explained fluctuations in settlement.

“Historically, the strength of the Leeuwin Current and associated changes in water temperature during February were known to significantly affect puerulus settlement, but this relationship has broken down,” he says.

Puerulus settlement in 2008-09 was the lowest in 40 years, and was not consistent with the predictions that there would be average or better-than-average settlement. 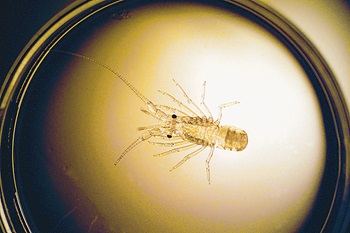 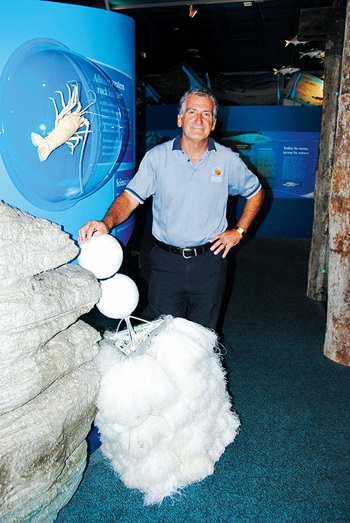 Nick Caputi with a puerulus collector used to monitor settlement of western rocklobster juveniles off the coast of Western Australia.
Photo: Rose Yeoman

New research by Department of Fisheries WA and CSIRO scientists found two new variables – breeding time and storms – that provide a possible explanation for fluctuations in settlement, including the most recent decline.

Rainfall was used as an index of storm activity affecting the lower west coast of WA because it is associated with oceanic conditions and westerly winds that may help bring larvae back to the coast.

“During May to October, rainfall, combined with the breeding time index, provides a good fit to the variation in puerulus settlement,” Nick Caputi says.

“The 2012-13 settlement provides a test of this relationship and indications are that it will be below average, which is what is predicted by storms and breeding times.”

He says climate change may be a factor in low settlement because water temperature and storm activity, which affect both spawning and larval periods, are demonstrating long-term trends.

“In recent years the spawning season has started earlier and appears to be caused by higher water temperatures near the onset of spawning in October. Higher temperatures since the mid-2000s coincide with below-average settlement and it is possible this earlier spawning time may result in a mismatch with other environmental factors such as peaks in ocean productivity or storms with westerly winds that assist the larvae to return to the coast,” he says.

A 50 to 70 per cent reduction in fishing effort in the past few years has also increased the migration of lobsters into deep water and contributed to an increase in breeding stock across the whole fishery.

Nick Caputi says the good news is that breeding stock is now at record-high levels in all other six areas monitored since the early 1990s.

“While managers and fishers cannot control the environment, they can significantly influence the abundance of breeding stock,” he says.