On a dark, new moon night in July 2010 when the sea was “glassy calm”, hundreds of phyllosoma – the larval phase of Western Rocklobster (Panulirus cygnus) – were captured in surface nets from the Leeuwin Current off the Western Australian coast north of Perth.

It was the first time phyllosoma of this species had been brought onboard alive for research purposes, and was a critical first step in a project led by Anya Waite, chief scientist in University of Western Australia’s School of Environmental Systems Engineering and at the university’s Oceans Institute.

The impetus for the study was the  low number of puerulus, a late stage of larval development. This ‘low recruitment’ of puerulus and subsequent decline in recruitment of adult rocklobsters in the WA fishery persisted for several years.

An industry workshop identified a lack of knowledge regarding biological and oceanographic mechanisms affecting phyllosoma nutrition, growth and survival in Australia’s most economically valuable single-species fishery. 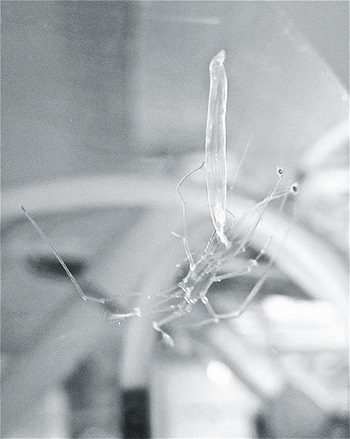 A phyllosoma, the first larval stage of Western Rocklobster, grows up to two centimetres in length. The one pictured here is ingesting the cylindrical body of an arrow worm.

Anya Waite describes the way phyllosoma access their prey in the wild as a critical nexus for their survival.

“Phyllosoma spend nine to 11 months floating in a planktonic prey field within the Leeuwin Current up to 1500 kilometres offshore. If they cannot source enough dietary lipids from their prey they will not metamorphose into puerulus and begin the journey across the current to settle in reefs along the coast,” she says.

In order to identify prey, research collaborators Richard O’Rorke and Andrew Jeffs, from the University of Auckland, New Zealand, developed a syringe-like device known colloquially as a ‘gut sucker’.
“When we removed phyllosoma gut contents using the sucker we discovered one-third had nothing in their gut, which means they might have been starving,” Anya Waite says.

“We used forensic-style DNA methods on the gut contents and compared the DNA ‘fingerprints’ with those already knownfor other ocean-dwelling species, to identify what they were eating in the wild.” She says radiolarian DNA was found in gut contents. Radiolaria are tiny protozoa in zooplankton. “But we have not yet determined if this was a primary or secondary food source,” she says.

Of the fake prey, the preferred food was krill, but in the wild these are usually too fast for phyllosoma to catch. The most favoured ‘real food’ source was arrow worms whose long narrow bodies are easy to ingest. Arrow worms have lower nutrition than krill but are easier to catch, Anya Waite says.

The project, which will be completed mid-2013, has had several significant outcomes.

The first outcome is a better understanding of the feeding ecology of Western Rocklobster phyllosoma.

“By identifying key prey we have opened up new research potential both in fisheries and aquaculture. We’ve assessed productivity of the Leeuwin Current water mass and evaluated the capacity of the plankton to provide food for feeding phyllosoma.

“Working with Lynnath Beckley from Murdoch University, we have identified an oceanographic feature – the Abrolhos Front – that appears to bring two contrasting water masses in close proximity, providing a shoreward flow pattern favourable to successful recruitment of puerulus.”

Anya Waite says the next step is to use an underwater video technique enabling the three-dimensional aspects of phyllosoma behaviour to be mapped in real time and provide a clearer picture of the relationship between phyllosoma and their prey field.

“The Leeuwin Current contains ‘eddies’, which are 100 to 200 kilometres in diameter, and we speculate that these may be feeding hotspots for phyllosoma prey as the waters in these eddies mix deeply and bring up nutrients from lower in the ocean that promote plant productivity when they come near the sea surface.”

She says it is possible that eddies are an uncomfortable environment for larger fish, which allows phyllosoma to exploit their prey field without fear of predation from larger species. “This is highly speculative and requires further investigation – for example, do we see bigger healthier phyllosoma in these areas?”

The study has been supported by the FRDC, providing research links between oceanography and fish ecology to support a fishery.