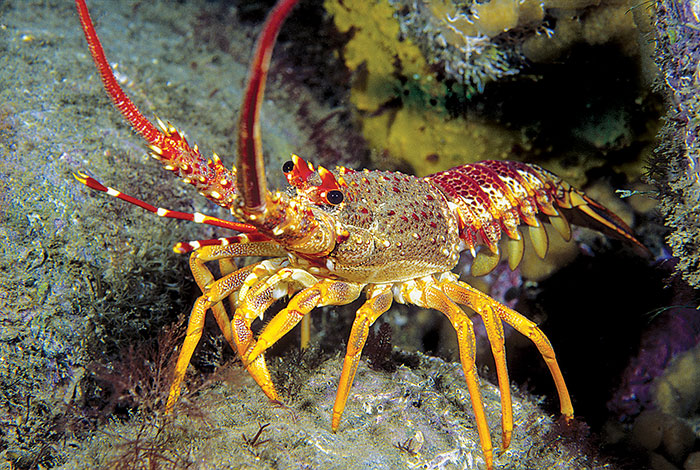 New research has verified the anecdotal evidence from rocklobster fishers in South Australia, Tasmania and Victoria: the best catches are made in the calm after a storm, and in the lead-up to a full moon. But strong waves or warm water could leave their pots empty.

The findings are part of a tri-state research project, led by Adrian Linnane from the South Australian Research and Development Institute (SARDI), into the environmental factors affecting rocklobster catch rates. The FRDC-funded project analysed more than a decade of wave height, moon phase, water temperature and catch data.

The Southern Rocklobster (Jasus edwardsii) fishery is one of Australia’s most valuable. In 2010-11 the Victorian catch was valued at $15.3 million, $59.5 million in Tasmania and $81.3 million in SA. The commercial catch totalled more than 3000 tonnes.

The fishery is managed through total allowable commercial catch (TACC) systems in each state, which are revised annually to ensure sustainable harvesting of stocks. The TACCs are largely influenced by the annual catch rate of both legal and undersized rocklobsters.

For most of the 2000s the catch rates were in decline, with TACCs accordingly revised down. The fishery modelling on which the TACCs are calculated is among the most sophisticated in the world and is becoming more sophisticated every year as more and more variables are brought to bear on the calculations.

While there is evidence to suggest that rocklobster recruitment into the fishery generally declined during the 2000s, resulting in lower catch rates, the aim of this project was to evaluate the influence of other environmental factors on the ease of catching rocklobsters and whether it was important to incorporate these factors into TACC calculations.

“In particular, we needed to know if catch rates were being affected by factors other than rocklobster abundance,” says Adrian Linnane, subprogram leader, offshore crustaceans, at SARDI.

To determine whether, and to what extent, environmental factors might influence catch rates, SARDI correlated a time series of historical daily catch rates with a range of environmental conditions between October 1998 and May 2009.

Data for the study came from various sources. Daily catch rates were estimated from the logbooks of commercial fishers, while environmental data came from a range of sources. Sea surface height and wind data were provided by the Australian Bureau of Meteorology.

Moon phase was sourced from the US Naval Observatory website, and daily average bottom water temperatures were compiled from loggers maintained by SARDI Aquatic Sciences. The wave dataset was obtained from WAVEWATCH III, a wind-wave model run by the US National Weather Service.

The strongest impact on the catch rate was from wave action, especially during a storm. The study found that when wave height was 25 per cent above the median height, the catch rate that day fell by an average of 10 per cent. However, three days after a storm, the catch rate would increase by about five per cent.

“Fishers routinely provide information on the impacts of wave action on catch rates, so it was interesting to see that in the scientific evidence,” Adrian Linnane says.

“One theory is that during a storm rocklobsters dig in and don’t feed. But after the storm, there’s more food exposed on the disturbed seabed, bringing the lobsters out again to feed.” He says this theory is supported by the observation that the effect was stronger in shallower waters where it could be assumed that the impact of wave action would be greater.

Moon phase was another factor that had an obvious impact on rocklobster catch rates. Again there was a lot of anecdotal evidence from fishers that their catch rates changed according to the phase of the moon, with more rocklobsters being caught just before the full moon and fewer as the moon went into its waning phase.

This industry knowledge was again confirmed by the data, which showed that there was an average increase of 10 per cent in catch rates in the three days before the full moon and an average fall of five per cent after the full moon. “One explanation for this impact is that the stronger tides in the lead-up to the full moon expose more food sources,” Adrian Linnane says. 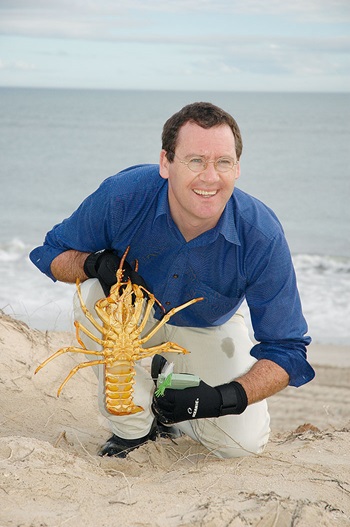 One of the main environmental events that initially triggered the project was a strong upwelling of cold water within the Southern Zone Rocklobster Fishery in February 2008. The assumption was that this surge of cold water from the Antarctic onto the shelf – which resulted in the sea temperature dropping substantially to 9°C to 10°C – caused the rocklobsters to become less active, lowering catch rates.

But Adrian Linnane says there was little evidence to suggest that lower water temperatures had affected catch rates.

“The current fishing season [2012-13] saw bottom temperatures up around the 18°C to 19°C mark, so there’s a big question over what impact this might have on the ability to catch rocklobsters this season.”

While these environmental factors did have a measurable impact on the day-to-day catch rates, it seems they cannot account for the fall in catch rates seen during the 2000s. The study found that their impact had less effect when smoothed out over monthly catch rates and negligible impact over the annual catch rate.

Senior fisheries scientist at Fisheries Victoria Terry Walker has also been involved in the research and says environmental conditions do play a part in determining the number of rocklobsters caught, and as such will be added to the factors used to calculate the TACCs. However, he says it is unlikely that their impact would significantly alter the TACCs.

“As a result of this project our stock assessments from here on will be much more scientifically defensible, and the bounds of uncertainty as we project forward to estimate stock recovery will be much narrower than before. That should give the industry and the fishery managers a lot of confidence in our TACC setting process, which should be a big plus for the industry,” Terry Walker says.