Evidence from the deep

The settlement of Southern Rocklobster’s final larval form – puerulus – has proven an important indicator of future catch trends in the Tasmanian rocklobster fishery.  However, rough seas and deep water off much of the state’s coastline have made it difficult to monitor settlement in many areas.

A collaboration of University of Tasmania scientists at the Institute for Marine and Antarctic Studies (IMAS) and fishers has successfully trialled a new approach to puerulus monitoring, which is providing the first direct evidence worldwide of puerulus settlement at depths of more than 100 metres.

Southern Rocklobster larvae spend 12 to 24 months in the open ocean after hatching before they metamorphose into their final puerulus stage and return inshore to settle onto reef habitats where they moult into juvenile rocklobsters.

IMAS has been monitoring puerulus settlement in shallow inshore waters off the east coast of Tasmania for more than 20 years. However, there are concerns that puerulus settlement observed in this area may not represent the entire fishery; sampling sites are few and most Tasmanian commercial rocklobster catch comes from remote deeper-water regions off Tasmania’s west and south coasts.

The east coast monitoring uses artificial habitat samplers (puerulus collectors) placed on the sea floor. These mimic the natural reef habitats where puerulus settle. Divers retrieve the samplers to monitor the number of settled puerulus, and this has provided valuable early indications of trends in future catches in the east coast commercial fishery. Low puerulus settlement observed from 2003 to 2008 was reflected in a downturn in catches in this region in recent times.

Previous attempts to deploy puerulus collectors in shallow water off the Tasmanian west and south coasts have been unsuccessful due to the harsh sea conditions.

In January 2012, IMAS received funding from the FRDC for the first phase of a research project to determine the feasibility of collecting puerulus in the deep, exposed waters off the Tasmanian west and southern coasts.

The project, titled ‘Developing cost-effective industry-based techniques for monitoring puerulus settlement in all conditions: trials in southern and western Tasmania’, has developed prototype puerulus collectors specifically for use in remote,deep and exposed waters typical of the south and west coasts of Tasmania.

These can be easily deployed and serviced by vessels from the commercial fleet, which regularly fishes this coast.

IMAS scientist Stewart Frusher, the principal investigator on this project, says recruitment to the fishery is important information for both fishers and managers.

“This project will enable the fishing community to become actively involved in monitoring their future,” he says. 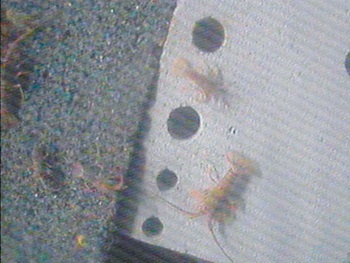 A workshop, attended by scientists, technicians and rocklobster fishers, was held to ensure that the new collector design could be safely and easily deployed, retrieved and serviced from the deck of a typical Tasmanian commercial rocklobster fishing vessel.

The prototype deep-water collector has a steel-framed substrate housing clad with three-millimetre perforated steel mesh on the downstream sides of the collector. This helps to retain puerulus flushed from the substrate during retrieval.

The substrate is suspended on the underside of the lid of the housing, making it easy to remove the puerulus on deck, and the housing is nested in the top of a standard steel rocklobster trap.

Following successful inshore trials, 24 prototype collectors were constructed, galvanised and deployed in eight strings, each with three collectors, on the south and south-west coasts of Tasmania in September 2012 into depths up to 107 metres.

So far, the prototype collectors have been retrieved, serviced and re-deployed twice by vessels from the Tasmanian commercial rocklobster fleet after soak times of about six to eight weeks.

Southern Rocklobster puerulus have been encountered in prototype collectors retrieved from depths ranging from 57 to 102 metres. This is the first direct evidence globally of puerulus settling in deeper water.

Executive officer of the Tasmanian Rock Lobster Fisherman’s Association Rodney Treloggen says the industry’s fishers are experienced at operating in extreme weather conditions – some of the roughest in Australia. Their knowledge and skills have proved an essential part of efforts to develop, deploy and service deep-water collectors in southern and western Tasmania.

As part of this project, IMAS and CSIRO have developed a prototype remote underwater camera system that can capture images of puerulus on collectors on the sea floor at predetermined intervals. These images can be viewed remotely and in real time.

The new monitoring devices have been deployed at four sites off Tasmania’s south and south-west coast.

Images captured are transmitted via the 4G mobile telephone network to an online server and can be viewed on any computer with internet access. The system comprises cameras and lights attached to the puerulus collector on the sea floor.

The computer can also be accessed remotely to adjust capture intervals, spontaneously capture images and update or troubleshoot software.

In field tests, the camera system delivered discernable images of Southern Rocklobster puerulus on collector substrates, and the power system supported hourly capture and transmission of images. Most of the camera components are inexpensive and readily available, providing a cost-effective means of monitoring puerulus settlement and post-settlement behaviour.

With the success of the first, proof-of-concept phase of this project, a second stage is proposed using the deep-water collectors to investigate puerulus settlement patterns by depth at various locations around the Tasmanian coast. It is also planned to assess the efficacy of existing puerulus monitoring programs by using the camera system to observe puerulus behaviour between collector retrievals.

Stewart Frusher says collaborative projects such as this provide a great opportunity to use the skills, knowledge and experience of the fishing industry and demonstrate its commitment to a sustainable future.

“This project aims to provide industry and government with an increased ability to forecast fluctuations in future rocklobster catches, allowing management to improve the economic and biological sustainability of the Tasmanian fishery,” he says.