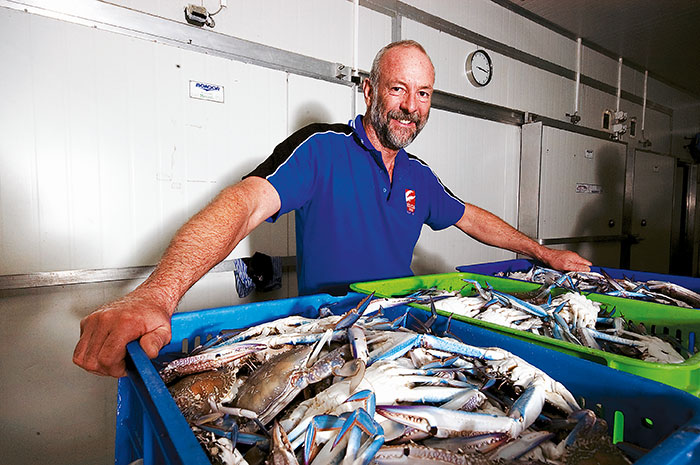 Peter Jecks with a haul of Blue Swimmer Crabs he relied on before his Shark Bay fishery was closed in the wake of the 2010-11 marine heatwave.
Photo: Melissa Marino

If it was not for diversification, the freak natural events that two years ago closed the Shark Bay crab trap fishery in Western Australia where Peter Jecks’ vessels catch Blue Swimmer Crabs (Portunus armatus) may have also shut down his business.

Whether it was dumb luck or foresight, his decision a few years ago to branch into hand-picked crabmeat – and other value-added seafood products – on top of his premium whole cooked crab has kept Abacus Fisheries afloat in an extremely challenging environment.

Developed as part of an Australian Seafood Cooperative Research Centre project with support from the FRDC, Peter Jecks’ crab cake product has continued to sell while the fishery has been closed thanks, in part, to a quantity of crabmeat he had previously processed.

“Normally product development takes a considerable period of time, but we effectively in 18 months had gone from the water to a product that was plate-ready,” he says. “The project I believe catapulted us two or three years ahead of where we would have been.”

While the experience has not been easy – the original plan was to underwrite the new product development with the established whole crab business – it has at least provided some revenue. And it has shown a clear way forward.

Before the 2010-11 marine heatwave and cyclone-associated floods closed the fishery, more than 90 per cent of his business was reliant on fresh crabs. But now, and even when the fishery re-opens, Peter Jecks wants fresh crabs to make up no more than 30 per cent of sales.

Not only will this spread risk across the business should another natural calamity occur, but it is also a better business model in its own right, he says.

Consumer-ready products, such as his recently developed prawn with tom yum and salmon with wasabi and sesame ‘shots’, provide consistent margins while giving better yield and cost control than fresh seafood sales.

“We are making Australian products you just cook and eat and the good news is there is an opportunity to grow that market in Australia as consumers are becoming more discerning of the origin of the food they order,”he says.

“When this all turns around we will have a very robust business model that will have a diverse range of incomes.”

Risk is also being spread by the use of seafood products from areas other than Shark Bay, such as Atlantic Salmon. As well, Peter Jecks is investigating the potential to develop products made from the thousands of tonnes of locally grown fruit and vegetables that would otherwise end up in landfill because they are not the right shape or colour for the big supermarkets.

Peter Jecks says the fishery’s closure has woken up a lot of people in the seafood game, including himself.

“We are taking advantage of a bad situation and trying to make it better,” he says. “It’s been challenging, but I actually like a challenge and it’s made me get off my arse and go back and do things that I’d got past having to do.”

Despite his optimism, the experience has not been without losses that he will never be able to redeem. One of the biggest was his staff of 40 people who, since losing their jobs, have also for the most part left the business’s base in Carnarvon.

The Jecks also lost a treasured family home in Perth, which had to be sold to sustain the business when the fishery was closed. “The impact has been devastating,” he says. “There is no other way to describe it.”

The Shark Bay Blue Swimmer Crab and Scallop fishery was closed voluntarily by fishers in the wake of the marine heatwave that increased temperatures by an unprecedented 5°C above average for two weeks in the area.

While heat stress affected crab numbers, Peter Jecks says a deluge of cyclone-related freshwater that flooded into the bay also had an effect, decimating seagrass beds and changing salinity levels and water quality in the bay. The immediate result on the seabed, he says, was chaos, with the usual crab distribution patterns thrown into disarray. Then within a few months the entire population collapsed.

The positive news is that recent surveys have shown a re-emergence of juvenile crabs. Given the species’ rapid growth rate, he hopes to see plenty of mature crabs in the fishery by the end of the year.

That data is being assessed by Department of Fisheries WA researcher Mervi Kangas, who is leading an FRDC-funded project on Blue Swimmer Crab recruitment and biology in Shark Bay, including sampling crab stocks five times a year.

She says that while early 2013 surveys show signs of recovery, a “softly, softly” approach is required to the fishery reopening because surveys from 2012 also showed an abundance of small crabs but by November they had almost disappeared.

“We have to take it survey by survey but we are keeping our fingers crossed that they do grow into sizeable crabs and that fishing can follow,” Mervi Kangas says. “That is what we are all hoping for.”