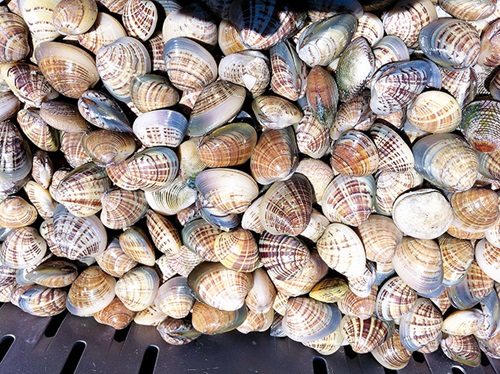 When the Roe’s Abalone populations in Western Australia’s north were all but wiped out in the 2011 marine heatwave, John Craike was forced to find an alternative to the species that has provided his livelihood for the past 20 years.

His search for something new led him to a friend’s operation in South Australia harvesting cockles, then back to the shores of Shark Bay, north of his base in Kalbarri. Local knowledge suggested that Shark Bay might be home to an abundance of cockles.

He and fellow fisher Bob Holt are now WA’s first cockle producers. They have been granted three-year exploratory licences to develop the newly discovered resource.

“We feel very privileged because it is a fishery that’s never been touched. We’re going into these areas that have never been harvested, and it seems like there is an infinite quantity there; obviously there isn’t,” John Craike says.

“The Department of Fisheries WA has a format where a few years down the track they will try and estimate what’s there, but it is very difficult at the moment.” He says the experience of the cockle industry in the eastern states will obviously provide a guide for the west.

It is a three-and-a-half-hour drive from John Craike’s base in Kalbarri to Shark Bay, so he and his crew make the trek north once every 10 days or so. When they come to a new area, they essentially hand rake through the sand in the shallow waters off the beach for about half an hour. The number of cockles collected in that time provides an indication as to whether there are likely to be enough for commercial harvest at that site.

They harvest for two to three days, depending on tides, before returning home. In that time they gather about 400 kilograms of cockles, which they sort on location and pack into foam coolers with saltwater ice before transporting to market. They supply wholesaler Hills Seafood Wholesale Food Merchants and also sell at auction in Perth.

“We are only harvesting what we can sell, so we are starting slowly and hoping the market will grow.” John Craike says Shark Bay’s World Heritage listing provides a marketing point because “you can’t get water any cleaner than that”, and the WA cockles are slowly gaining a reputation distinct from that of eastern cockles.

He says one of the biggest problems is to counter the widespread mislabelling of seafood in Australia.

“I was visiting the Tweed River in New South Wales recently and I saw WA Vongole in a fish shop there. I wondered how they had got hold of them, because there are only two suppliers and I am one of them. When I read the fine print, the Vongole were packed in WA, but they were actually Vietnamese. Mislabelling is a real problem for the whole industry.” 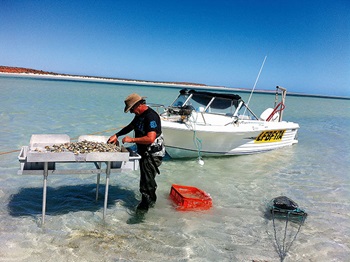 While developing the new cockle fishery, John Craike is also assisting with efforts to revive Roe’s Abalone stocks. Small abalone from populations south of Kalbarri have been relocated north, with John Craike and other divers hand planting them onto the reefs at six different sites.

The research that underpins this process is being led by Anthony Hart at the Department of Fisheries WA and will also involve introducing spat produced by a hatchery at Bremer Bay into the abalone fishery.

John Craike says while it may be possible to re-establish the abalone, he doubts the biomass will ever return to previous production levels.

The fishery had an annual quota of 36 tonnes, although the industry voluntarily agreed to reduce this to 12 tonnes a year for three years from 2008 because of concerns about sustainability of stocks. “A month before that [2011] hot water event, we had successfully improved the stocks and we were asking to have the quota lifted again. And then we lost the lot.”

Roe’s Abalone is just one of several species with fluctuating fortunes he has witnessed during his 38 years as a fisher, some as a result of declining stocks or changes to government regulations. John Craike began as a commercial crayfisher in Victoria, before moving to shark fishing and then – 20 years ago – to abalone.

Of his latest change, he says it is significantly safer than abalone diving: “You don’t have worry about white pointers biting you in half, just the odd rouge sea snake.”