A severe marine heatwave and associated warmer ocean temperatures off Western Australia have changed the nature of marine life, presenting opportunities and challenges for fishers and fisheries management

Seagrass in Shark Bay before (left) and after heatwave and flooding.
Photo (right): Matt Fraser

Something strange has been happening lately in the waters off Western Australia. Something that indicates a significant shift in the ocean environment. Fishers as far south as Albany on the Southern Ocean have reported for the first time catching Spanish Mackerel (Scomberomorus commerson), which is usually confined to the tropics. Other tropical species such as Threadfin (Polynemidae) and Common Dart (Trachinotus botla) are regularly turning up in catches off Perth. Even Manta Rays (Manta birostris) have been spotted.

While the change may appear positive for these tropical species, the impact on temperate species, particularly in the transition zone between tropical and temperate waters around Shark Bay, midway up the WA coast, are less welcome. The fisheries for Saucer Scallops (Amusium) and Blue Swimmer Crabs (Portunus armatus), once prevalent in Shark Bay, are doing it tough and there are real questions being raised about the potential effects on Snapper (Pagrus auratus) that are at the northern-most end of their range there.

These unprecedented changes are the result of a warmer south-east Indian Ocean over the two past summers, which has seen an increase of 1°C to 2°C in WA waters. These warmer temperatures followed the extreme marine heatwave of 2010-11, in which WA waters were more than 3°C above long-term seasonal averages, peaking at more than 5°C above average for two weeks across February and March between Shark Bay and the Abrolhos Islands.

Caused by several climatic drivers including unusually hot, still weather, this dramatic event allowed tropical species to move south on an abnormally strong Leeuwin Current. But it also had a severe impact on the marine ecology. Fish kills were reported down the coast, corals were bleached and a Roe’s Abalone (Haliotis roei) fishery at Kalbarri was wiped out. 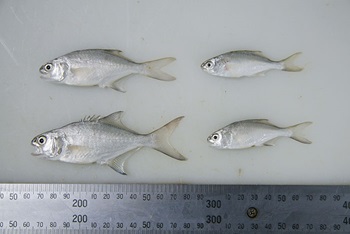 Common Dart collected by Department of Fisheries WA netting surveys at Pinnaroo Point, just north of Perth. The smaller fish were collected in September 2011 after the heatwave and the larger fish about one year later in 2012, indicating they have survived over two winters and grown.
Photo: Chris Dowling

To make matters worse for Shark Bay, which has already been hit by the marine heatwave, two major cyclones caused the Gascoyne and Wooramel rivers to flood and flush fresh water and sediment into Shark Bay. This contributed to the devastation of its Scallop and, in particular, Blue Swimmer Crab populations and the forced closure of both valuable fisheries.

Since the heatwave, fisheries managers in WA have been keeping a keen eye on the effects. A workshop held in the weeks afterwards detailed an inventory of fish kills, coral bleaching and species reported out of their traditional ranges by recreational and professional fishers, researchers, divers and beach-walkers all along the coast.

This included thousands of dead fish, eels, crabs and rocklobster washed up on beaches, as well as dead pelagic fish floating on the sea surface. Coral bleaching was reported at the Abrolhos Islands and Rottnest Island, where new records of Red Bass (Lutjanus bohar) and Parrotfish (Scaridae), among other species, were also reported. At Dunsborough, a dead Leatherback Turtle was washed up well south of its normal range.

But it is information gleaned from a follow-up workshop, ‘The Heatwave: Two Years On’, supported by the FRDC that is helping build a fuller picture of the effect on fisheries of not only the heatwave, but also the above-average sea temperatures that have followed.

That workshop, held in March this year as part of a broad FRDC-funded project looking at the effects of climate change on WA fisheries, heard from fisheries scientists investigating a range of marine species including crabs, prawns, scallops, seaweeds, seagrasses, finfish and even penguins.

Workshop co-convener Gary Jackson says that while much of the research is still work-in-progress, a clear theme emerging from the workshop is that species are moving from their traditional ranges at unprecedented rates. This is prompting fisheries’ managers to re-evaluate the landscape of the fisheries themselves.

The evaluation of fishery boundaries is an important consideration not only because higher sea temperatures over the past three years have led to species’ movement, but also because the average temperature of WA waters is expected to rise permanently by 1°C to 2°C in the next 50 years. Therefore, the changing distributions of species are likely to be more lasting.

Evidence of this from the ocean is that fish species have already adapted to the changing conditions and are being found in new areas that can support their survival. This happened, Gary Jackson says, in two waves. First, adult fish species as well as eggs and larvae came down on the strong 2010-11 Leeuwin Current and then, in the ongoing warmer conditions further south, were able to survive.

Now, two years later, with continued warmer-than-average temperatures, those fish have been breeding and are now spawning in southern waters, further growing the populations.

“We have had a number of species turn up around Perth and further south such as Threadfin and Common Dart, which we haven’t had in our records before,” Gary Jackson says. “We know they’ve arrived as very small juveniles but they’ve persisted and there’s even evidence that a couple of species have become sexually mature and are now possibly spawning in southern waters.”

Gary Jackson says this is the real test of whether conditions are changing: “that a tropical species can move hundreds of kilometres and find conditions so that individuals are able to go through a full life cycle and reproduce”.

While tropical fish species that are extending their range southwards could be considered ‘winners’ of the changed conditions (along with the recreational fishers who are happy to see them), there have also been species – and fishers – that have lost out.

The Roe’s Abalone population at Kalbarri that was wiped out by the heatwave is undergoing a translocation program, with hope the species will recolonise from a population that has been sourced from a site further south. This temperate abalone species is very sensitive to temperature changes, and a large recreational abalone fishery near Perth could also struggle as warmer sea temperatures are increasingly experienced.

One of the biggest challenges is that facing the Scallop and Blue Swimmer Crab fishers operating in Shark Bay, whose resource was decimated by the conditions and whose fishery two years later remains closed. While an FRDC-funded project into Blue Swimmer Crabs is showing signs of rejuvenation, the outlook is not so optimistic for the Scallops, which are showing little sign of recovery.

Temperate seaweeds around Jurien Bay took a ‘hammering’ in the heatwave. This has implications for both the seaweed itself and for other species that may rely on it.

While the ink is not yet dry on much of the science, researchers are working closely with fisheries managers and fishers in the Shark Bay fishery – and others – to monitor the progress of the affected stocks and to discuss future options including whether fisheries are opened, closed, expanded or changed.

Fisheries scientists and managers are operating in “unchartered waters”, says Gary Jackson, but while they have no control over a warming ocean they can control the management of the mobile marine populations and protect the breeding stocks.

“It’s our job to try and understand the changes that are going on and then look ahead to try to manage the outcomes for fisheries,” he says.

“What we’re trying to achieve is to manage fisheries sustainably the way we always have but now against a backdrop of the warming oceans. As long as we’ve got the science in place I’m confident we will be able to do what needs to be done.”