The early life of the West Australian Dhufish 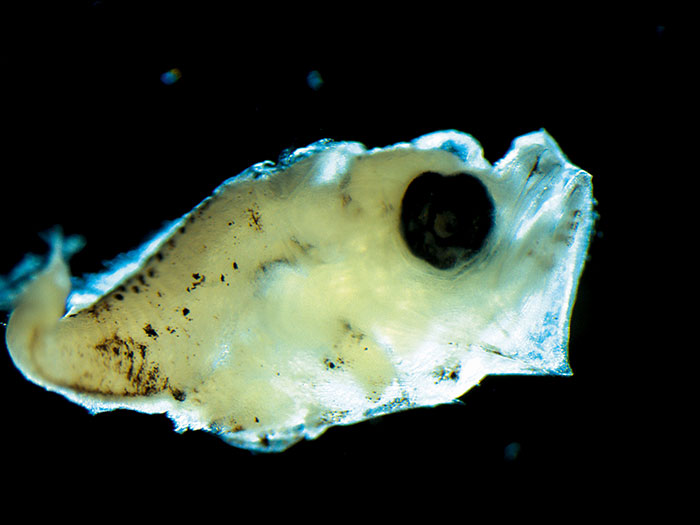 For a fish as prevalent and important as the West Australian Dhufish, its offspring have remained under the research radar for a remarkably long time.

Endemic to Western Australia, the Dhufish (Glaucosoma hebraicum) is a favourite of recreational and commercial fishers. But, until recently, little was known about its eggs or larvae, which had not been found in the wild.

Now, a groundbreaking study has combined the techniques of hydrodynamic modelling, plankton sampling and near real-time DNA-based identification to locate, identify and assess the biomass of Dhufish eggs and larvae at two sites off the coast of south-west Australia.

Researchers hope that improved understanding of the biomass and movement of Dhufish eggs and larvae, and their recruitment into adult fish stocks, will enable sustainable management of Dhufish fisheries.

Together with snapper, Dhufish account for about half the commercial catch from the West Coast Demersal Scalefish (Interim) Managed Fishery, with a commercial value estimated at more than $2.4 million.

Evidence is emerging that Dhufish stocks are not as healthy as they once were. Both commercial and recreational fishers are having to move further offshore to catch Dhufish, suggesting that populations have decreased in shallower waters. The fish that are being caught tend to be younger, indicating that the proportion of older fish is decreasing.

Figure 1 Seven-day trajectories of particles released at the bottom and surface layers of the model on 2 January 2012. Black dotted line shows sites of particle release

Data also suggests that fishing mortality in Dhufish populations is outstripping natural mortality, raising concerns about the long-term sustainability of the fishery, which has led to recent changes to demersal species fishing regulations.

With these factors in mind, a team of researchers from CSIRO Marine and Atmospheric Research (CMAR) and the Western Australian Department of Fisheries set out to find the eggs and larvae of West Australian Dhufish in the wild for the first time.

CMAR biologist Joanna Strzelecki says it was difficult to document the abundance and location of eggs and larvae because their distribution was patchy and researchers did not know exactly where the fish spawned.

“It is also difficult to identify larvae, and especially eggs, using traditional taxonomy – it is very time-consuming, resulting in a lag between surveys and data,” she says.

To overcome these twin challenges, the researchers used a novel combination of methods: hydrodynamic modelling and genetic analysis.

To begin with, they had to work out the most likely places to find Dhufish eggs and larvae. Joanna Strzelecki says there was some information about where spawning might occur because in the past there had been reports of large spawning aggregations, although these had not been seen recently.

Based on this information, the research team chose a stretch of coastline from Cape Naturaliste to Cape Leeuwin, known as the Capes region, and another site north-east of Rottnest Island where juvenile Dhufish had been found.

They used a high-resolution computer model to simulate the coastal currents in the area to work out how eggs and larvae might disperse around those sites.

Passive particles were used to represent Dhufish eggs and larvae as they were carried on the modelled movement of the water. Particles were released at 400-metre intervals along the 20-metre depth contours in the Capes region at both surface and bottom layers of the model.

The results of the model guided field sampling efforts. Using nets designed to catch zooplankton, researchers took samples over a three-month period (December to February). At the same time as sampling, they released drifters into the water, which provided more information about the movement of water currents at the time and place of sampling.

Joanna Strzelecki says the hydrodynamic model combined with the observed hydrodynamics from the drifters helped maximise the likelihood of finding fish larvae and eggs.

They also analysed environmental factors at each sampling site, such as temperature, salinity, and concentrations of nitrite/nitrate, phosphate, ammonium and chlorophyll.

The team then had to determine if they had successfully captured Dhufish eggs and larvae in the samples using the polymerase chain reaction (PCR) diagnostic technique. This detects and amplifies even a single copy of a particular DNA sequence.

“We used the species-specific PCR assay to detect the West Australian Dhufish DNA from mixed zooplankton samples, and that allowed us near real-time processing of the plankton samples,” Joanna Strzelecki says.

“It normally takes a day to go through one plankton sample but we were able to process 12 samples in two hours because of the species-specific PCR assay.” 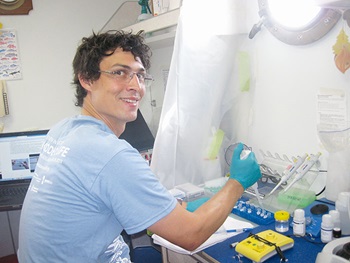 The tests were conducted while researchers were still on board the research vessel.

This approach also allowed the researchers to assess exactly how much Dhufish DNA existed in each sample, which they could use to estimate the biomass of Dhufish eggs or larvae in the sampled areas.

Using this data, and the information gathered about local environmental conditions, researchers examined the effects of nutrients and temperature on the eggs and larvae.

They found that chlorophyll and nutrients such as phosphate and ammonium had no correlation with concentrations of eggs and larvae, but their numbers increased in warmer water and decreased when the water was more saline.

The Dhufish project is considered a success on two levels.

First, the researchers managed to find and identify Dhufish eggs and larvae, and generate some baseline data on where these are found in the Capes coastal region and off the coast of Perth.

Second, the study proved that hydrodynamic modelling and real-time genetic analysis could be used to track, identify and quantify the biomass of eggs and larvae of a particular species.

“It has the potential to go much further,” Joanna Strzelecki says.

“The combination of techniques used in the project has an array of applications where there is little knowledge of the location of larvae or organisms are difficult to identify.” The techniques could be used to measure recruitment and to monitor the impacts of climate change, and also shifts in the abundance and distribution of organisms.

The findings in the report Location and transport of early life stages of Dhufish provide valuable information to help manage Dhufish stocks.

“Recruitment success in fish depends on processes influencing the larval stages,” the report says. “Information on how the abundance of larvae correlates with the biomass of spawning stock and oceanography increases the ability to predict recruitment, which contributes to better adjustment of fishing mortality, leading to reduced risk of overfishing.”

The study’s techniques and results pave the way for further research. For example, more information could be gathered about the movement of eggs and larvae, larval behaviour, nutrition and how the biomass of larval Dhufish varies from year to year – information that might then be used to estimate the size of Dhufish stocks.