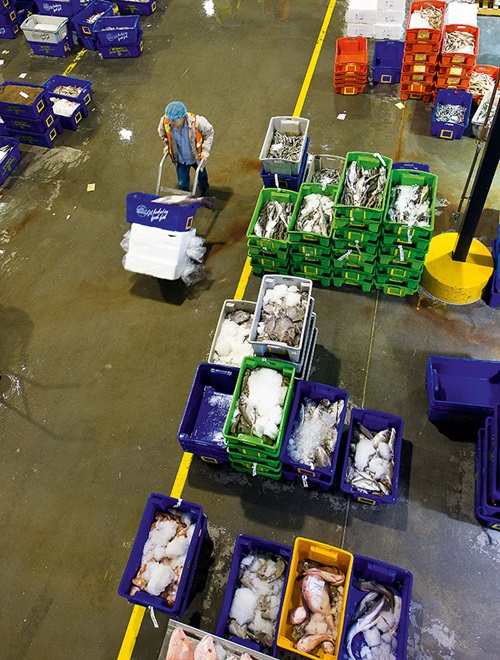 After more than a decade of uncertainty, there is a renewed sense of enthusiasm and direction among the tenants at the Melbourne Seafood Centre, the latest incarnation of the city’s wholesale fish market.

Just two years ago, the market was on the brink of closure. It had operated from its site on Footscray Road, opposite the Melbourne docks, since 1958, but Melbourne Council had sold the site and needed the tenants out. It had already privatised the market operations and did not have an alternative site to offer the traders.

It was an uncertain time for both buyers and sellers, says the chief executive officer of the seafood centre, Barbara Konstas. There had been plans for a major redevelopment at Docklands, a combined wholesale-retail operation in the style of the Sydney Fish Market, but these fell through.

With the end of the lease nearing, a number of seafood traders came together to form the Melbourne Seafood Centre at a site in nearby West Melbourne. As a commercial operation, the traders would no longer be subject to the vagaries of the council, but would be in control of their own future, Barbara Konstas says.

The only catch: the new site would not be ready until eight months after the end of the lease at the old location. 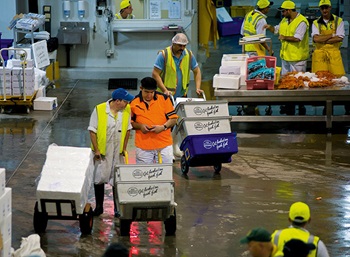 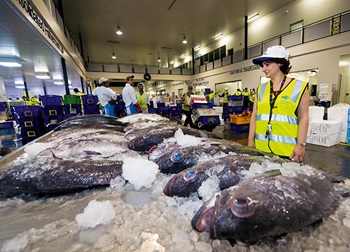 “We put a proposal to the State Government that it would be a great loss to Melbourne, to the state, if the seafood market was to just close,” Barbara Konstas says.

“It has a history dating back to the 1890s and Melbourne is a major producer of seafood. Between 70 to 80 per cent of Victoria’s finfish have traditionally been sold through the wholesale market.”

Granted a nine-month lease extension, the market was able to continue operating until traders could move to their new $25 million home in Kensington Road, West Melbourne.

In February 2013, the Melbourne Seafood Centre celebrated its first anniversary, with an estimated $120 million worth of fresh and frozen seafood traded in the first year – around 15,000 tonnes of product.

Of the 11 wholesalers trading at the new centre, eight moved from the previous market and three are new operators (there is one vacant stall). There are 280 buyers registered to trade at the centre, which operates on a private treaty system between buyers and individual wholesalers, rather than an open auction system.

Fish delivered to the centre are offered for sale between 4am and 7am, seven days a week. Buyers arrive early to inspect the day’s offering from the different traders, a system that promotes competition and ensures traders have the highest quality product available.

Fish arriving after 7am are generally held on-site for sale the next day, unless specific arrangements have been made in advance. There are no retail sales or processing on-site, and the products traded include some interstate and international seafoods.

One of the new stallholders at the Melbourne Seafood Centre is Regal Seafoods. Company director John Papanopoulos says it has been a good move from Regal’s previous position as a wholesale buyer at the old market to becoming a trading agent and expanding the business. The company still has wholesale and processing operations at South Melbourne.

“The new location is more compact, so it is easier for buyers to check out all the products on offer and decide what they need to buy. Regal also buys from other stalls at the centre, for our wholesale operation, as well as being a selling agent,” John Papanopoulos says.

“The fish on offer is very good quality, which gives you confidence as a wholesaler to pass it on to restaurants or retailers. It is in everybody’s interests to have the best quality product available.”

After surviving the extended period of uncertainty, traders at the new centre have a a real sense of community and confidence in the future, Barbara Konstas says.

“We want to do more to promote our seafood and we are planning to work with Seafood Industry Victoria to do this,” she says. “Buyers are very keen to have more information to pass on to consumers about what to look for in buying fish and how to prepare it.

“There are species in Victoria that aren’t as common in other states which make a great meal, such as Garfish or the freshwater Rainbow Trout. There are a lot of good local fish that people don’t eat, because they don’t recognise them or know what to do with them. That’s something we’d like to help address.”