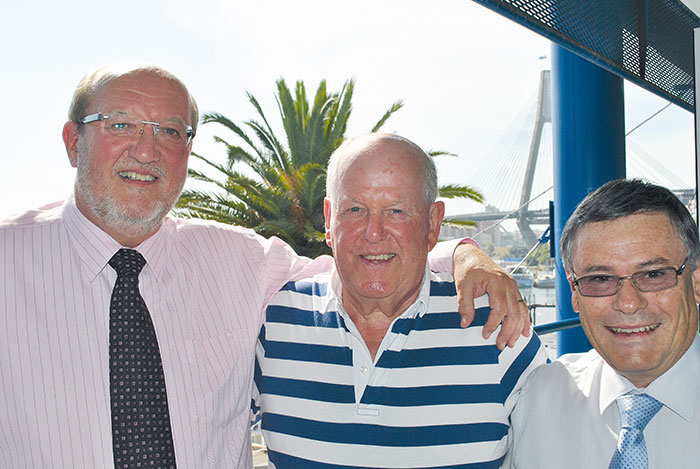 There is a familiar look to the new leadership at Sydney Fish Market (SFM), despite the retirement of long-serving chairman Bill Gibson in November.

Grahame Turk, the market’s managing director for the past 12 years, has stepped into the chairman’s role, while SFM’s company secretary and administration manager, Bryan Skepper, is the newly appointed general manager under a restructure of the company’s management.

Bill Gibson had been chairman of SFM for 18 years and, together with Grahame Turk, oversaw the privatisation of the market operations during the 1990s. Shareholder value in the market now totals almost $16 million of retained profits, while more than $6 million worth of dividends has been distributed.

Bill Gibson says he has enjoyed his time at SFM, interacting with directors, managers and staff. “Their support has underpinned my role at SFM and I thank everyone for that. I wish SFM and its people the very best for the future.”

Grahame Turk led the initial industry consortium to privatise SFM and was SFM’s founding chairman before becoming managing director and now returning to the chairmanship.

“For me, I think my biggest achievement was lobbying for the fish market to be owned by the seafood industry,” Grahame Turk says. “To be owned by the people that are directly involved, who give so much back, who put in hours and hours of work to ensure Australia has access to fresh seafood, that’s what it’s all about.”

Grahame Turk will continue to serve on a number of industry and government advisory bodies as an advocate for the seafood industry, while Bryan Skepper maintains more of an operational focus. As general manager Brian Skepper is not a voting member of the board of directors, a minor change to the previous structure, under which Grahame Turk, as managing director, did have a vote.

Bryan Skepper paid tribute to Grahame Turk and Bill Gibson as the “driving force behind making SFM being what it is today – an iconic seafood destination for tourists and locals alike”.

He says he will focus more on the operations of the business, while Grahame Turk will continue to play a role in the external relations and advocacy with industry and government.

“At Sydney Fish Market we essentially have three businesses: the seafood business, the Sydney Seafood School and a property business,” Bryan Skepper says.

“The property business – the wharfs and carpark, the auction room and coolrooms – provides about 50 per cent of our income, but its management has been a bit disjointed. We are now bringing that together under the responsibility of one person.

“Our tenants have also indicated they do not want the full redevelopment of the site that had been proposed. So in the next few years we will undertake a refurbishment of the existing facilities,” he says.

A new educational program being launched in New South Wales will see school students learning all about their local seafood industry from those who work in it every day – wild-catch and estuary fishers, oyster farmers and other seafood workers.

Seafood Industry Partnerships in Schools (SIPS) will teach students about the different types of fishing and aquaculture operating in NSW, the importance of the industry to NSW communities, and how fishing resources are used and managed, including what the industry is doing to ensure sustainability.

SIPS is an initiative of OceanWatch Australia and is funded by the FRDC. The program began in Tasmania in 2010 and its success has led to continued support and expansion into NSW.
OceanWatch Australia executive chair Brad Warren says the program will help get children thinking about where their food comes from.

“There is no one better equipped to talk about these things than those who work in the seafood industry, and that is the beauty of SIPS – the students will be getting their information straight from the horse’s mouth, so to speak,” Brad Warren says.

SIPS is aligned with the new Australian schools curriculum and offers real-life learning. It demonstrates to students how things they learn in the classroom, such as science and geography, can be applied in an everyday working context.