The field of environmental and resource economics is relatively young, particularly as it applies to fisheries. The FRDC is helping to build much-needed expertise through a series of scholarships for postgraduate economic research.

She says there is a huge demand for economic input into fisheries and other marine resource management issues, but there are not enough economists with the necessary skills in this area and they are thinly spread across Australia.

“As well as the shortage of trained economists in this field, there has also been a lack of postgraduate and professional training opportunities in marine resource economics,” she says. “By having a program that targets these issues we are developing experts who are able to help the fishing industry meet the challenges of the future, by improving resource access and allocation arrangements and enhancing profitability.

“The FRDC scholarships are central to addressing the problem and we currently have eight students receiving support through the program.”

Kofi Otumawu-Apreku was studying for his Masters of Economics at the University of Adelaide when the FRDC’s marine resource economics program called for applicants in 2010. “I had always been interested in resource economics and renewable resources, and I realised this applied equally to marine as to land-based resources,” he says.

“Resource economics overall is a relatively small field. It is not one of the high-profile economics disciplines, marine economics even more so. There are few people working in this field.”

Kofi Otumawu-Apreku came to Australia from Ghana, where he lived in a coastal area and fish was the main source of animal protein for many people. He identifies closely with the importance of sustainable fisheries, which is the subject of his PhD thesis: ‘Matters of Management, Sustainability and Efficiency – Essays in Fisheries’.

His project spans the gamut from illegal fishing to the productivity of South Australian fishing vessels. His aim is to examine the interaction between fisheries management policies, profits and the behaviour of fishers. 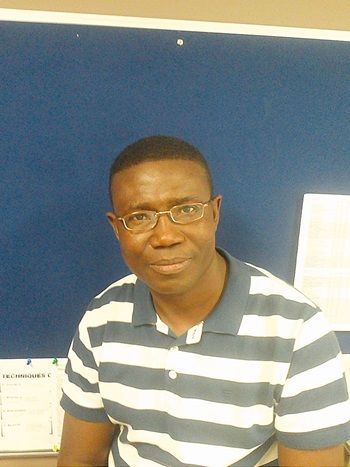 “Expert captains and crews from developing countries are employed to sh and they don’t keep records. when the boats are caught, the operators just abandon their vessels and crew, knowing it is less costly to acquire different boats and replace crews than to face the consequences of punishment.”
– Kofi otumawu-apreku

Game theory is one of the tools Kofi Otumawu-Apreku is using to conduct his analysis. This looks at the strategies people employ in making decisions about whether to cooperate with or violate management regulations.

He says that when a management tool affects profit margins some fishers will try to go around the rules. If the penalties for breaking the rules are within a range that allows a fisher to ‘survive’ if caught, then the penalties generally help to achieve compliance.

But if the penalties are too large to recover from, it introduces a greater element of risk and more dangerous behaviour that can make compliance less likely.

Where the penalty for fishing illegally involves both fines and confiscation of the boat, the conflict escalates, Kofi Otumawu-Apreku says.

“Expert captains and crews from developing countries are employed to fish and they don’t keep records. When the boats are caught, the operators just abandon their vessels and crew, knowing it is less costly to acquire different boats and replace crews than to face the consequences of punishment.”

While this work has a global context, other parts of his research have a more local application. This includes a detailed examination of the profit efficiencies in the SA Rock Lobster fishery.

One of the questions Kofi Otumawu-Apreku asks is: “Given the inputs required to generate an income, how can you organise those inputs to be as efficient as possible?”

“You have to look at which components most affect profits, including factors that you can’t readily control, such as fish stocks, quota allocations, and the age of the fishing vessel and engine. These are non-discretionary items, but they can have a major influence on profits.”

Other aspects of the thesis consider profit efficiency and its technical and allocative components. In addition, the thesis seeks to explore environmental variables that may help explain profit inefficiency identified in the fisheries under investigation.

He is using economic tools adapted from operations research and the banking sector to assist his work with data from the SA fishery, and hopes to develop a profit efficiency model that can be used in other fisheries.

In 2012 he presented papers on his research at the Australian Agricultural and Resource Economics Society (AARES) conference in Fremantle and at the International Institute of Fisheries and Trade conference in Tanzania.

Kofi Otumawu-Apreku expects to complete his PhD at the University of Adelaide’s School of Economics in May. The FRDC has funded his research and the Adelaide Scholarship for International students (ASI) has provided his tuition fees.

He says the support of the FRDC and ASI has made it possible for him to continue his research in Australia, along with the support of his academic supervisors, Stephanie McWhinnie, whose research focuses on fisheries, and game theory expert Dmitriy Kvasov. 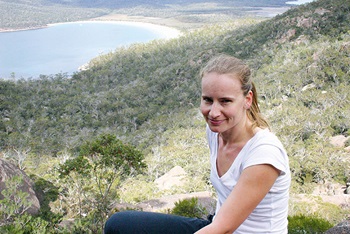 “I am trying to establish the relationship between environmental conditions such as water salinity or temperature and the productivity of the farms.”
– Peggy Schrobback

Peggy Schrobback has received an Australian Postgraduate Award scholarship, topped up through the FRDC economics initiative, to support her PhD at Queensland University of Technology (QUT) investigating the economics of the Sydney Rock Oyster industry.

She says there is general interest in the role of aquaculture to feed an increasing population. However, most of the existing research focuses on environmental or ecological aspects, with only a limited number of projects studying the economic aspects of aquaculture.

Her objective is to provide an economic analysis of the Sydney Rock Oyster industry that contributes to industry development strategies and might provide the framework for the analysis of other aquaculture industries in Australia.

She says her initial findings show there are clearly separate markets for the two species, although there is evidence that the development of the Pacific Oyster industry has had an adverse impact on Sydney Rock Oyster prices.

The demand for Sydney Rock Oysters was found to be relatively inelastic in the long run, while no long-run relationship could be identified for Pacific Oysters, reflecting the developing nature of this sector.

She presented the preliminary results on the market integration and demand analysis of the Australian edible oyster market at the AARES conference in February last year.

Peggy Schrobback is also studying the role of environmental change on the productive capacity of the industry. As part of this assessment, she has surveyed all Sydney Rock Oyster producers in NSW and Queensland.

Data from the surveys is still to be analysed, but includes production information as well as climatic and water quality indicators from various sources. “I am trying to establish the relationship between environmental conditions such as water salinity or temperature and the productivity of the farms,” she says.

She is also looking at socio-economic and management aspects in the development of the industry. This will include an assessment of the supply chain for Sydney Rock Oysters.

Peggy Schrobback expects to complete her PhD thesis in 2014. Her supervisors include Louisa Coglan at QUT and Sean Pascoe at CSIRO/QUT.