The Victorian Scallop Fishery is one of three scallop zones in the Bass Strait, and extends out from the coastline to 20 nautical miles. The same arrangement is in place in Tasmania and the area of water between the two state zones is managed by the Commonwealth Government. The current boundaries were settled in 1986 with an Offshore Constitutional Settlement agreed between the three jurisdictions. 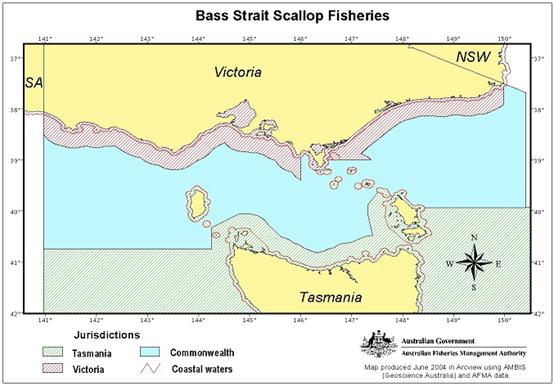 Historically, the majority of the fishing activity in the Victorian zone has occurred in the eastern waters of the State, with most vessels launching from the ports of Lakes Entrance and Welshpool. A commercial scallop fishery also operated in Port Phillip Bay until 1997 when it was closed to commercial operators. The area has remained accessible to recreational fishers. Commercial fishing for scallops is by dredging; vessels tow a single dredge that is dragged along the seabed. Dredges are deployed from the rear of the vessel and are up to 4.5 meters wide. A tooth-bar on the bottom of the mouth of the dredge lifts scallops from the seafloor and into the dredge baskets. To participate in the Scallop Fishery, fishers must possess a Victorian Scallop (Ocean) Fishery Access License. There are strict regulations regarding licenses.