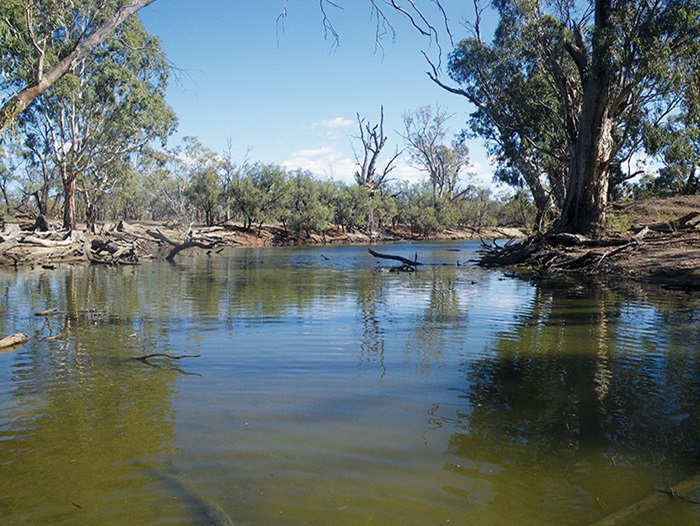 Tar-Ru Wetland after the installation of the screens.
Photos: Iain Ellis

The 2016 study on the lower Murray River in far-west NSW tested the potential for screens placed on the inlets of dry wetlands to prevent adult carp from re-colonising the wetlands as they were refilled.

It also evaluated the quality of habitat in the refilled wetland, compared with those of nearby wetlands where adult carp had not been excluded.

The Tar-Ru Wetland in western New South Wales, or ‘Wetland 780’ according to its official Murray–Darling Basin designation, has provided a testing ground for a new strategy to improve native fish nursery habitats.

The results were promising according to Iain Ellis, the study’s leader and fisheries manager in the NSW Department of Primary Industries (DPI) Fisheries Aquatic Habitat Rehabilitation Unit. He says it suggests some of the Murray–Darling Basin’s 30,000 wetlands could be used to help the recovery of native fish stocks.

Wetlands provide important feeding, spawning and nursery sites for native fish. Most of the 40 or so native species of fish in the Murray–Darling Basin use wetlands at some point in their life cycle.

Wetland habitats can be particularly important for ‘flow-pulse specialists’ such as Golden Perch and Silver Perch.

“The concept revolves around the idea of floodplain recruitment,” Iain Ellis says. “That’s a phenomenon where high flows or floods induce migration and spawning of Golden and Silver Perch.

“River flows then transport drifting young – eggs and larvae – downstream, often into floodplain billabongs and lakes. By virtue of their ephemeral nature these wetlands are very productive, and can offer a warm, sheltered and food-rich habitat for young fish.”

Many of the wetlands in the Murray–Darling Basin historically underwent natural wetting and drying cycles linked to the boom-and-bust flow patterns in our rivers. When dry, sediments compact and crack, locking nutrients into what Iain Ellis calls “ecological stock cubes”.

Importantly, carp are eradicated when a wetland dries out completely. When river flows later refill these wetlands, a burst of nutrients is released. Millions of tiny plankton and aquatic plants can emerge from dormant seedbanks or drift in as the wetland refills.

These provide abundant food and habitat for the hungry mouths of tiny developing fish, which may also drift in or are laid in situ by adult fish that move in to take advantage of the productivity boom.

Iain Ellis suggests breeding by many species, in addition to flow-pulse specialists, would have regularly been promoted by floodplain recruitment in nursery habitats throughout the Murray–Darling Basin. The regulation of rivers has disrupted the natural flow patterns and prevents many wetlands from drying out. It also reduces the availability of faster-flowing habitat in river channels, which adult fish may require to proliferate. 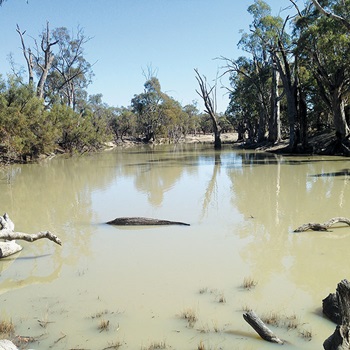 Unfortunately, adult carp are early colonisers of refilling wetlands. In addition to preying on and competing with native fish, their feeding habits also disturb sediment.

“Emerging plants and plankton get disturbed or eaten, and the value of the nursery habitat is substantially reduced,” Iain Ellis says. “The turbidity levels get higher, so you don’t get appropriate light penetration either, which further compromises aquatic food webs.

“So just by preventing larger carp from entering during refilling, you give the wetland a better chance of establishing good water quality, and you increase the potential for plankton, waterbugs and aquatic plants to proliferate. This equates to a good nursery habitat for young native fish.”

The pilot study was funded by Western Local Land Services and led by NSW DPI Fisheries, which worked with local Indigenous natural resource management stakeholder, the Tar-Ru Lands Board of Management.

The site of the study, Wetland 780 on land managed by the Tar-Ru Board, has been artificially maintained full in recent decades by the operation of Lock 8 on the Murray River. However, it was drained during a deliberate drawdown of the lock and river level in 2015.

When the wetland was dry, 20 metres of 40-millimetre square mesh screen was installed across the creek that feeds the wetland. The screen allowed small-bodied and larval native fish to pass through when the wetland was later refilled, but prevented access by mature carp.

As the wetland began refilling in late April 2016, the screen successfully kept out larger carp. In their absence, the water in Wetland 780 was substantially clearer than it was prior to its drying (see photos). It was also clearer than other nearby wetlands that had undergone the same dry–wet cycle, but without the addition of a carp-exclusion screen. Within weeks aquatic vegetation in Wetland 780 had started to germinate, and waterbugs and plankton were abundant.

The project then tested the viability of using screened carp-free wetlands for the ‘grow-out’ of hatchery-bred native fish. Approximately 700 hatchery-bred Golden Perch fingerlings were released into Wetland 780 in late May of 2016. Each fish was marked with a chemical dye to differentiate them from wild-bred Golden Perch.

An assessment of the wetland’s fish community was conducted in October 2016, detecting abundant native Australian Smelt, Bony Herring, Carp Gudgeon and plenty of yabbies. The survey also recorded juvenile Golden Perch, which were later found to be a mix of the marked hatchery-bred fish and naturally spawned juveniles that had passed through the exclusion screen as the wetland was filled. Only two small carp were collected in the survey, but had little impact due to their size. 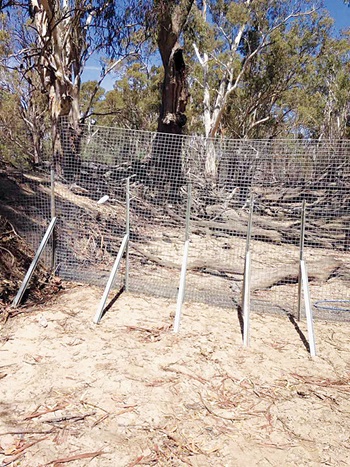 Iain Ellis says the results present at least three opportunities. “One, it’s a potential grow-out option for hatchery-bred native fish. A hatchery can produce millions of eggs and larvae of large-bodied, recreationally valued species. Instead of growing them out in small rearing ponds, they could potentially be released to natural wetlands with managed hydrology and temporary screens. This could in turn increase production capabilities and may even improve stocking success.”

The second option involves using these wetlands to rebuild stocks of threatened species in strategic locations within their historic range.

“There is a suite of native species that are gone from vast areas throughout the Basin where we know they were formerly abundant,” Iain Ellis says. These include small ones such as Southern Purplespotted Gudgeon and Southern Pygmy Perch, but also larger-bodied Silver Perch, Trout Cod, Catfish and Macquarie Perch.

“We could potentially reintroduce threatened species to managed and screened wetlands in cases where appropriate habitat can be created in the absence of carp.” This could be particularly valuable should larger-scale carp control measures be implemented in the near future – opening the door for threatened fish to return to their former habitat.

Finally, managed and screened wetlands provide an opportunity for engagement with local stakeholders and communities.

“Fish are a great engagement tool – they bring all types of people into the conversation,” Iain Ellis says. “In the case of Tar-Ru Wetland, the Indigenous land managers quickly recognised they could contribute to water management in addition to their land-management practices.

The key is finding wetlands with the right properties, including the ability to be drained and refilled and connections to the water source that are narrow enough to be practically screened.

“At this stage it’s not a large-scale option for carp control, but it can certainly give native fish a helping hand. There could be hundreds of wetlands that might be suitable for one species or another, under the right management program,” Iain Ellis says.