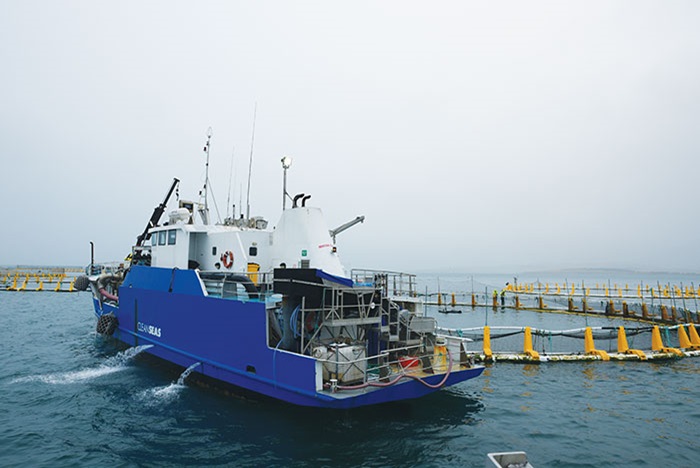 From feed to disease, researchers around the country are joining forces with industry partners to enhance aquaculture 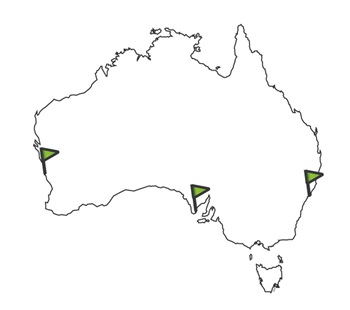 The ‘Kingfish for Profit’ (K4P) initiative is more than half way through a three-year national program and researchers have identified several fish health and nutrition ‘signposts’ to help improve the viability of Yellowtail Kingfish (Seriola lalandi) aquaculture as it continues to expand in Australia.

The $6 million K4P initiative is part of the Australian Government’s ‘Rural Research and Development for Profit’ program, and is coordinated through the FRDC. The aim is to bring an affordable, consistently available farmed ‘white’ fish to market in Australia – a companion to the increasingly popular Atlantic Salmon.

Evaluations of feed ingredients, feeding strategies for different environmental conditions and growth stages, and health indicators for Yellowtail Kingfish have been the focus of the program’s early trials.

The FRDC also funds other Yellowtail Kingfish aquaculture research in line with its national research priority 3: developing new and emerging aquaculture growth opportunities. This continues its historical investment on this species, which has also been partly conducted through the Australian Seafood Cooperative Research Centre (CRC), which recently ceased operations.

K4P research findings are already providing advice to improve nutrition and feed management practices, and are also making progress on longer-term industry-wide goals, such as the development of non-invasive health diagnostics. The investment in these areas of research has provided the confidence for industry to further invest capital in the development of the Yellowtail Kingfish farming sector that began in 1998 in SA and continues to expand with commercial ventures in Western Australia and NSW.

David Stone at SARDI is the principal investigator for the K4P nutrition theme.

Trials centred at the South Australian Aquatic Science Centre at West Beach, in Adelaide, are investigating the needs of fish of one to four kilograms and cover all three K4P project themes: nutrition, feeding strategies and nutritional health.

David Stone says much of the previous feeding research has focused on the needs of fish during the ‘summer’ growth period, in warmer water. However, the production cycle also requires fish to be cultured throughout winter. He says there is considerable scope to improve profitability of farming by increasing performance of Yellowtail Kingfish using on-farm feeding practices that are designed specifically for winter water temperatures. Many fish species show reduced growth and are less efficient in converting feed to body weight in cold conditions. Seawater temperatures off the SA coast can fall to 10ºC and Yellowtail Kingfish being cultured typically lose weight and condition that must be recovered as water temperatures increase in spring.

Commercial Yellowtail Kingfish winter feeding strategies have previously been based on minimal feeding to reduce the cost of feeds and feeding operations. To address this production issue, a trial was designed to evaluate the potential gains from better feeding regimes specifically for use during winter.

A three-month tank-based trial conducted by SARDI began with fish weighing about 1.4 kilograms and evaluated seven different feeding rates using commercial pellets in water temperatures of between 11.5 and 16ºC. Feeding regimes ranged from feeding fish 0.1 per cent of their body weight one day a week, up to a regime that fed fish to their ‘satiation’ point (when they stopped feeding), for six days a week.

In the trial, the Yellowtail Kingfish that were fed until they were full once a day, six days a week, were able to convert food efficiently and gain weight during winter, compared with fish fed less often. The best-performing fish gained up to 0.1 per cent of body weight a day during the 84 days of the trial, with a final average weight of 1.54 kilograms. These results demonstrate that there is potential for Yellowtail Kingfish to maintain condition and increase growth during winter.

David Stone says further work is needed to determine whether Yellowtail Kingfish have ‘compensatory’ growth capabilities, with accelerated growth in spring to offset otherwise slower growth or weight loss during winter. This could further influence the refinement of feeding strategies.

Marty Deveney and Andrew Oxley at SARDI are nutritional health co-theme leaders for the K4P program. The SARDI team has been working to identify microbes that live in the gut of Yellowtail Kingfish and assess correlations between those in the gut and those on the skin and gills, or even in the water in which the fish live. 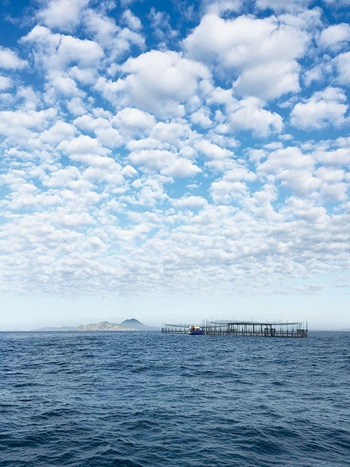 The aim is to match specific microbes with specific nutritional responses and diseases.

The researchers found that in general the populations of gut microbes of Yellowtail Kingfish differed significantly between fish cultured in the land-based hatchery and those in marine environments – both sea cages and in the wild. The make-up of the microbe populations changed substantially with the onset of conditions such as gut enteritis, suggesting a link during periods of poor health of fish.

Like the gut, the microbial communities of the skin and gills also changed with the changing health status of fish. A series of potential biomarkers has been identified to assess fish health. These include the presence or absence of certain bacteria species and the ratio between ‘good’ and ‘bad’ microbes as indicators of health status, or for use as possible probiotic treatments.

Trials involving brood stock and fish of less than one kilogram are centred at Port Stephens Fisheries Institute  in NSW.

Mark Booth of NSW DPI is based at Port Stephens, where he and his team are researching the nutritional requirements of Yellowtail Kingfish feed ingredients and their digestibility. In contrast to the research in SA, this project is focused on how the fish respond in summer conditions. Mark Booth says the research builds on NSW DPI research undertaken during the past decade under the auspices of the FRDC-funded Aquafin CRC and the Australian Seafood CRC, which developed Yellowtail Kingfish feed formulation models.

“We are looking at the bioenergetics – the protein and energy requirements of the Yellowtail Kingfish under different temperature regimes – and refining some of the feed models that were developed in the past,” Mark Booth says. “We can then make these models available to feed manufacturers and farmers, who are most focused on using that information on farm as production management tools.”

Fishmeal and fish oil replacement are key areas of research for industry, both in terms of cost-of-production savings and in terms of ongoing industry sustainability as it reduces reliance on wild-harvested feed ingredients.

Other NSW DPI research is focusing on the baseline requirements of essential nutrients and amino acids including choline, histidine and taurine for smaller fish.

“Feeds and feeding strategies for different life stages will allow the animals to make the most efficient use of the feed. This will have direct benefits for on-farm running costs,” Mark Booth says.

Another study has investigated the feeding efficiency of Yellowtail Kingfish in low dissolved oxygen environments. Results from this study showed that the negative effects were exacerbated at high feeding levels, suggesting that farmers should restrict feeding in low oxygen environments and monitor both oxygen saturation and concentration levels.

Several of the program’s research findings have already been presented at national and international conferences, including the World Aquaculture conference in South Africa in June 2017.

New South Wales is set to harvest its first Yellowtail Kingfish later this year as part of a five-year joint research and production venture between the New South Wales Department of Primary Industries (DPI) and the Huon Aquaculture Group. 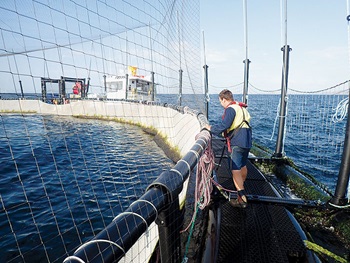 Yellowtail Kingfish aquaculture has been the focus of research at the NSW Port Stephens Fisheries Institute since 2008, and this is being accelerated into marine trials through the national ‘Kingfish for Profit’ (K4P) initiative launched in 2015. Ocean-based research and emerging commercial aquaculture production has been underway in South Australia since 1988 and in Western Australia since 2008.

Now, NSW has joint ocean trials at the Marine Aquaculture Research Lease (MARL) in Providence Bay, Port Stephens, in a research partnership between NSW DPI and Huon Aquaculture. The lease is about seven kilometres offshore, which allows the use of new technology including larger, deeper and more robust aquaculture pens developed and operated by Huon, suitable for open-ocean aquaculture.

Only fish produced from locally endemic Yellowtail Kingfish brood stock are being used on the MARL, with the first fish stocked in October 2016 – 25,000 fingerlings weighing an average of 30 grams each.

The fingerlings are fed daily, except for brief periods when weather conditions are too rough, and checked for health and growth. Fish survival rates are high and growth is faster than expected.

“We are monitoring the performance of brood stock closely over repeated spawning events to determine the contribution of specific parents to each batch of fingerlings,” says NSW DPI senior research scientist Stewart Fielder.

“We are also evaluating larval responses to photoperiod (day-length) and salinity, and how this might influence progress through their life cycle.”

Research will include evaluating the effects of growing fingerlings to more than 30 grams before transferring them to sea cages.

Several experiments have also been completed to determine dietary requirements and feeding strategies to promote the fastest growth of Yellowtail Kingfish.

Environmental approvals for the MARL have included ongoing benthic and wildlife monitoring prior to, during and after stocking of the pens, which is being undertaken by the University of Newcastle.

This includes interactions with sharks, dolphins and other marine fauna, with no detrimental incidents reported to date.

Water quality and sea floor sampling is undertaken routinely and a remote operating vehicle takes video footage of the sea floor. Samples are taken from below the proposed sea pen sites, areas outside the boundary of the research lease and at ‘reference’ sites between the lease and Broughton and Cabbage Tree Islands.

Ian Lyall, NSW DPI’s aquaculture manager, says the monitoring has not detected any environmental impacts from the aquaculture operations so far.

“We’ll be using this data from the MARL and from the Port Stephens facility to help develop a policy platform for aquaculture in NSW marine waters. The research partnership is helping to guide the future of the industry in the state, to ensure it is viable and sustainable,” he says.

A tour of Huon’s NSW aquaculture operations will be held prior to the Seafood Directions conference on 27 September 2017.

Australia focuses on the conditions specific to the growing regions in that state, which include pre-approved finfish aquaculture zones in the state’s Kimberley and mid-west coastal zones.

The mid-west zone, around Geraldton, has been developed with Yellowtail Kingfish in mind, with a state funded pilot to grow out the species underway.

A new trial, initiated subsequent to the ‘Kingfish for Profit’ program, is comparing fish derived from WA and South Australian brood stock, and benchmarking the performance of fish in waters representative of the mid-west coast region.

The lead research agency is South Metropolitan TAFE, with work based at its Fremantle campus; Indian Ocean Fresh Australia at Geraldton is the project’s commercial producer partner.

New health-related research will investigate treatments for flukes, including the use of hydrogen peroxide in warm water, and learning more about the bacteria species Photobacterium damselae, which has been implicated in Yellowtail Kingfish mortality.